Stomata plays a very important role in the process of photosynthesis and respiration. Keep reading the article to know about stomata function in detail.

Stomata plays a very important role in the process of photosynthesis and respiration. Keep reading the article to know about stomata function in detail.

Every creation of God has its own importance and all of them are connected to each other. This means that we all are an important part of the ecosystem. Plants and trees hold an entire level of the ecosystem pyramid. They give us air to breathe, food to eat, and many other things too. One of the most important parts of plants is the stomata. Its singular form is called stoma, and it means ‘mouth’. Stomata function is to regulate the process of photosynthesis, transpiration, respiration, etc. In this article we are going to discuss this structure and function in plants, which is an important part of plant biology.

Apart from this variety in location, dicot leaves have more number of stomata on the upper surface than the lower, but monocot leaves have the same number in the upper and lower part of the leaves. The structure of the stomata consists of a kidney-shaped epidermal cell with an opening in the center, which is known as a pore. Inner walls of the guard cells face the aperture and are thicker than the outer layers. Guard cells also have large vacuoles. The cells which surround the guard cells are known as subsidiary or accessory cells.

The most important and major function is the exchange of gases. In simple terms, we can say that the plant takes CO2 from the atmosphere and gives out O2, which is utilized by animals and human beings.

Photosynthesis is a process of manufacturing food in the plant with the help of sunlight, carbon dioxide, and water. The plant takes carbon dioxide from the atmosphere, which is taken through the stomata. The water molecule is broken down into hydrogen and oxygen, and the oxygen is then released in the atmosphere as a by-product. This oxygen is also released through the stomatal openings. Hence, we can say that the medium of gaseous exchange is stomata. This is a medium of cellular respiration in plants. The work which a nose does for us is similar to the stomata in a plant.

Opening and Closing of Stomata

Apart from the transpiration and photosynthesis process, stomata also have another very important function. This is to save water loss. This is done by the opening and closing of the stomata. Plants cannot make their food at night. This is because they do not get sunlight which in turn does not open the stomata. As soon as sunlight strikes the plant’s leaf, there is a change in turgor pressure. This forces the guard cells to form a crescent shape and open the pores of the stomata.

This makes the pores open and the processes of photosynthesis, transpiration, and respiration are continued. But once the sun sets, the guard cells lose the turgor pressure and this results in the closing of the stomata. This opening and closing also depends upon the environmental conditions. In adverse condition such as very high temperature, the stomata closes itself to stop water loss. They sometimes also keep moist air closed inside themselves to prevent the plant’s tissues from freezing in excess cold.

If you have a microscope at home or in your school or college then just take a small section of the leaf and try to observe these tiny but important parts of the plant. 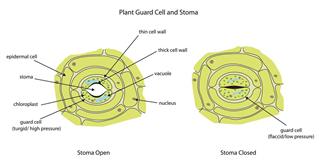 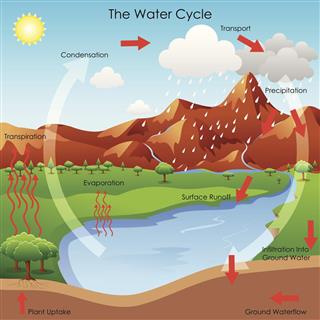 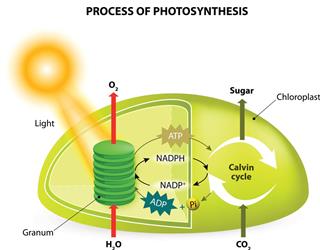