What is the Movement of Volvox?

The following article provides information about the volvox species of algae, and more importantly, the mechanism of its movement.

Home / Uncategorized / What is the Movement of Volvox?

The following article provides information about the volvox species of algae, and more importantly, the mechanism of its movement. 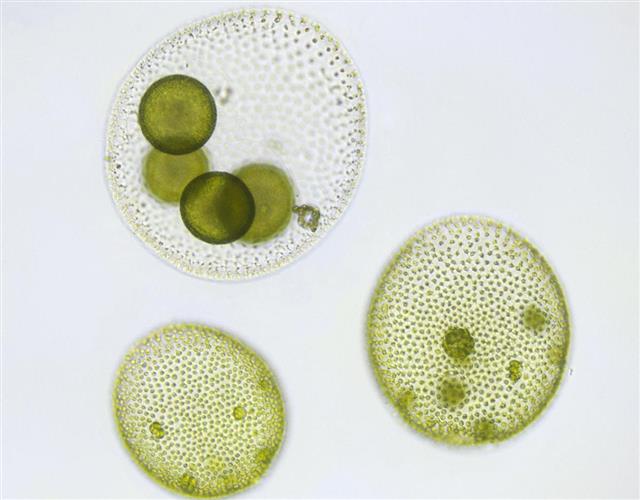 While studying biology, some living species that are unique to their groups, are used as model organisms. For example; arabidopsis (flowering plants), paramecium (ciliates), and drosophila (flies). Likewise, volvox is a type of green algae that possesses some peculiar features. It is found in freshwater habitats including ponds, lakes, and rivers.

A spherical colony of volvox houses thousands of individual algal cells. In a single colony, the number of cells is found to be approximately 500, to as much as 50,000. A high level of coordination is expected for propelling the whole colony inside water.

In order to understand better, the mechanism of movement of this organism, it is important to study its structure. This species was observed for the first time in 1700 by Antonie Philips van Leeuwenhoek. Its size is about 1 mm., and is also visible to the naked eye. The individual algal cells are connected together with the help of cytoplasmic strands. Many times, one or more light green colored daughter colonies are also found inside a volvox cell.

The word motile is used to define the movement related characteristics of volvox. This is because, each of the member in the colony resembles a Chlamydomonas (another green alga), and bears two thin, hairlike structures called flagella. The cells are arranged along the periphery of a spherical shaped, mucilaginous coenobium, with their flagella pointing to the outer side. The flagella are oriented in specific directions, and beat in unison to form coordination within themselves, ultimately leading to locomotion. An interesting part is that the colony can change its direction as per the requirement.

The polar organization of algal cells is responsible for the movement of this algal species. A large eye-spot is present in the anterior pole, which enable the cells to detect light. This the reason why volvox moves towards the direction of light. In contrary to the anterior side, the posterior pole participates in reproduction process. In case of daughter colonies that are present inside a mother colony, the flagella are directed inwards. Thus, they move along with the mother colony.