Rough endoplasmic reticulum is a cell organelle whose main function is synthesis of proteins. It is found only in eukaryotic cells.

Rough endoplasmic reticulum is a cell organelle whose main function is synthesis of proteins. It is found only in eukaryotic cells. 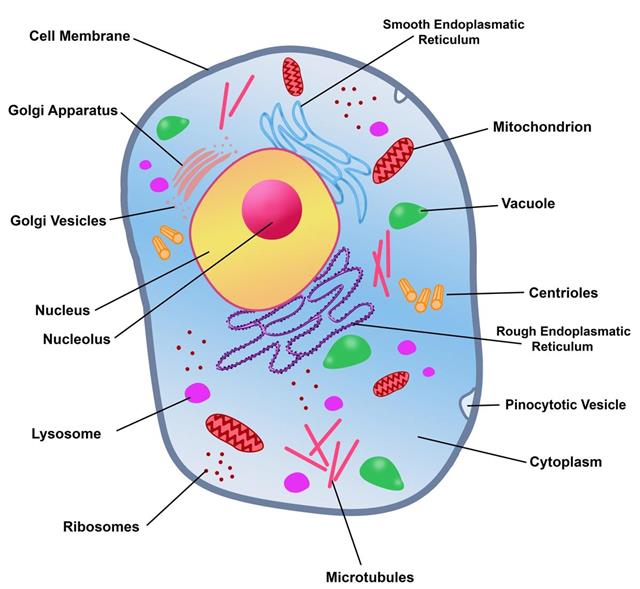 There are two kinds of cells structures: prokaryotic and eukaryotic. The latter one makes up the units of life, be it animals or plants, or fungi or protists. Basically, a eukaryotic cell consists of a well-formed nucleus and membrane-bound organelles, unlike the prokaryotes, which are devoid of both.

ER is an intense network of interconnected tubules, vesicles, and fluid-filled sacs surrounding the nuclear membrane, which spreads all across the cell cytoplasm. If you were looking for a rough endoplasmic reticulum analogy, then you can very well relate it to a highway with intermittent stations, where the proteins are being synthesized and transported to the cell membrane.

Rough ER is made up of convoluted and sealed sacs, which are studded with membrane-bound ribosomes on the outer surface. For instance, in an average liver cell, there are about 13 million ribosomes present on the outer layer of its structure. In a cell, RER is spread throughout, but is found densely near the nucleus and the Golgi apparatus (an important cell organelle, also known as Golgi complex). The branched tubules of this organelle expand when the cell is active in protein synthesis.

In other times, the reticulum branches out, and the cisternae (flattened disk-like structure of Golgi apparatus) dilate to form fluid-filled sacs in the cell. The entire structure has an interior space, which is also known as endoplasmic reticulum cisternal space, or lumen, which comprises 10% of the cell volume. Both RER and the Golgi complex work in sync, where the functions of the latter are synthesizing and transporting proteins.

Ribosomes studded on the outer surface of the RER assemble the proteins, and this process is termed as translation. Precisely, the RER segregates the polypeptides and amino acids from cytosol (the intracellular fluid), and assembles the proteins. It is here that the proteins are synthesized for other cell organelles like plasma membrane, Golgi complex, secretory vesicles, plant vacuoles, lysosomes, endosomes, etc. Sometimes, inside the lumen of ER, these proteins attach themselves with certain sugar groups to form glycoproteins, as per the cell requirements. Another interesting fact of RER is that hemoglobin is produced out of the four polypeptide chains present in this cell organelle.

Some of the major functions of RER are listed below:

Severe health concerns like emphysema and cystic fibrosis can occur, if during synthesis process, the proteins are not folded correctly, and also aren’t quality checked due to some reasons. Therefore, rough ER plays a stellar role in numerous biochemical processes involving the cell.