A Simplified Comparison of Reciprocal Cross Vs. Test Cross

In genetics, a cross refers to the breeding of individuals with distinctly dissimilar phenotypes in order to determine the zygosity as well as to decipher the inheritance pattern being followed. The most commonly used types, the reciprocal cross and test cross, are compared and explained here. 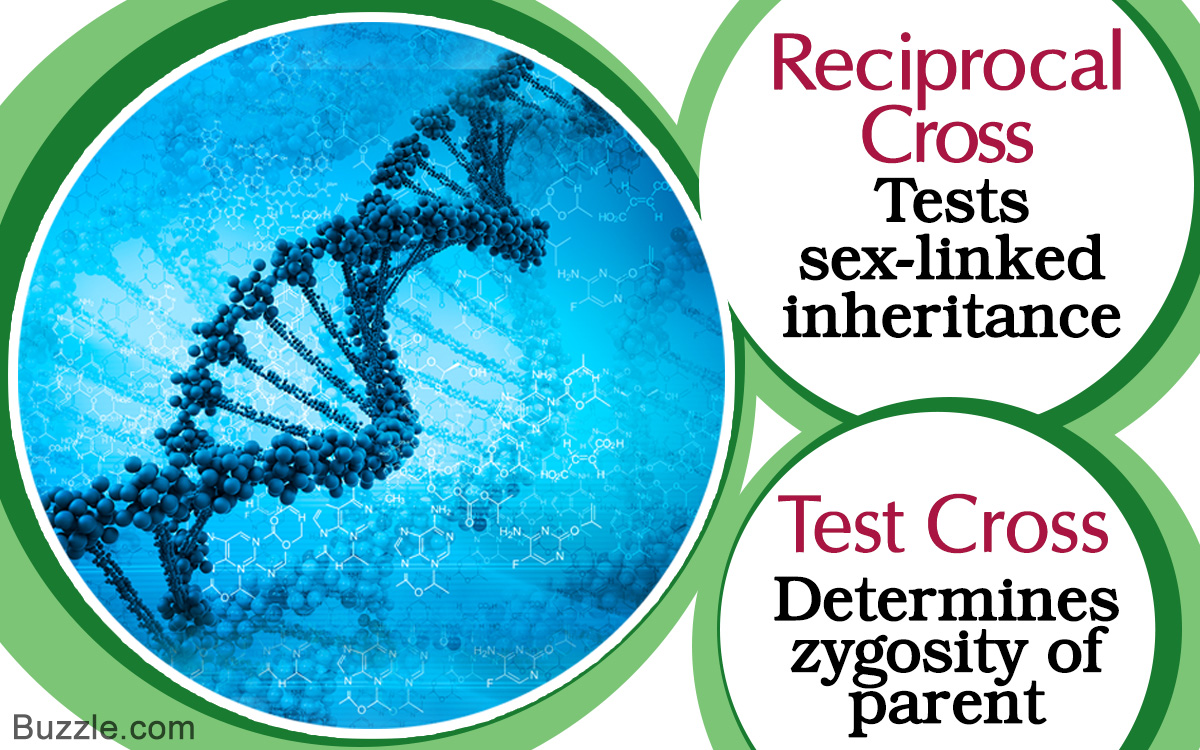 In genetics, a cross refers to the breeding of individuals with distinctly dissimilar phenotypes in order to determine the zygosity as well as to decipher the inheritance pattern being followed. The most commonly used types, the reciprocal cross and test cross, are compared and explained here.

It is a tabular diagram that is used to predict the genotype and/or phenotype of the offspring or parent in a particular breeding experiment.

Genetic crosses can be classified in two ways. If they are characterized on the basis of the number of attributes being examined simultaneously in a specific cross, the two categories are monohybrid cross (one genetic trait) and dihybrid (two genetic traits) cross. These types of crosses are used to determine the proportion of possible offspring that would display a particular trait. On the other hand, if a classification of these crosses is conducted based on phenotypic/genotypic investigations, they are segregated as test cross and reciprocal cross.

The major difference between these two types is that a test cross is carried out to determine the zygosity of the parent; whereas, a reciprocal cross is used to determine the role of parental sex in the inheritance of a trait, i.e., if the trait is sex-linked. To gain a complete understanding of this difference, the two concepts must be understood.

This type of genetic cross was first conducted by Gregor Mendel in his experiments with pea plants, and it involved the crossing or mating of an individual with an unknown genotype, displaying a dominant phenotype with another individual who had a homozygous recessive phenotype and genotype. The characteristics of the progeny produced from such a breeding would help in determining the zygosity of the parent with respect to a particular gene or trait. Zygosity refers to the similarity between the various alleles of the same gene, and an organism can be heterozygous (dissimilar alleles) or homozygous (identical alleles) for a given gene.

This conclusion is the rationale behind conducting a test cross. The progeny produced from a test-crossed individual is examined, and the pattern of phenotype displayed by the progeny helps determine the genotype of that individual.

In case of a flowering plant, a single gene is responsible for the color of the flower, and it occurs in two colors―red and white. Here, red color is the dominant phenotype; whereas, white is a recessive phenotype. Hence, if the alleles of the color are represented by the letter “F”, “F” would denote the dominant allele (red) and “f” would refer to the recessive allele (white). Hence, the genotype for the white flower would be “ff”, but the genotype of the red flower could be “FF” or “Ff”. To determine the exact genotype, a test cross is carried out with the homozygous recessive white flower, and is represented as follows:

In this case, all progeny obtained will have red flowers, proving the parental red flower to be homozygous.

In this case, half the progeny will have red flowers, and the other half will have white flowers, proving the parental red flower to be heterozygous.

In case of a pea plant, the yellow seed color (Y) is dominant over the green seed color (y), and round shape of these seeds (R) is dominant over wrinkled seeds (r). Hence, a green and wrinkled seed would be homozygous recessive (yyrr), but a yellow and round seed could be homozygous (YYRR) or heterozygous (YyRr). To determine the exact genotype, a test cross is carried out, and is represented as follows:

All the progeny exhibit yellow and round seeds, hence, the parent is homozygous for both traits.

Half the progeny has yellow and round seeds, and the other half has green and wrinkled seeds, hence, the parent is heterozygous for both characters.

This type of genetic crossing was observed and developed in conjugation with genetic studies in fruit flies (Drosophila melanogaster). Its purpose is to observe the effect of parental sex on the inheritance of a trait, i.e., if a trait is sex-linked or not. For such a breeding experiment, the individuals to be crossed must be true breeding (homozygous). The setup includes two sets of breeding, in one case, a male exhibiting the trait of interest is mated with a female that does not exhibit that trait, and in the other set, a female exhibiting the trait is crossed with a male lacking that trait. Since the individuals are homozygous, there is no dominance-related interference in the inheritance, and the interchanging of the genders ensures a confirmatory result if the trait is in fact sex-linked.

The most common example of this type of a cross is the identification of sex-linkage for white-eyed phenotype in Drosophila melanogaster. Thomas Hunt Morgan explained this through his experiments on these flies. On performing reciprocal crosses, he was able to determine that the allele producing the white-eyed phenotype was sex-linked, present on the X chromosome, and was a recessive trait. He deciphered that the white eye was observed due to a mutation in the gene that coded for the red eyes. Hence, a wild type fly would have red eyes. The analysis of the reciprocal cross and sex linkage can be elucidated as follows:

All the male offspring are white-eyed while all the females are red-eyed. This suggests that the white eye is not expressed in females due to its recessive nature, but in case of males, since only one allele of the gene is present, the white eye is expressed.

All the offspring have red eyes. This proves that the allele for the white eye is recessive and sex-linked to the X chromosome. Since the females have red eyes despite being heterozygous, they are carriers of the white eye mutant allele.

Both these types of genetic crosses have played a fundamental role in gaining knowledge and an insight towards inheritance. While these breeding experiments have largely given way to easier and faster analysis of heritability via the use of DNA sequencing and molecular genetic techniques, understanding their rationale is crucial in comprehending the principles of genetics.