Frederick Griffith’s Experiment and the Concept of Transformation

Transformation is a molecular biology mechanism via which foreign and exogenous genetic material is taken up by a cell and incorporated into its own genome. This phenomenon was first described and discovered by British bacteriologist, Frederick Griffith. The concept of transformation and the experiment that led to its discovery are described here.

Home / Uncategorized / Frederick Griffith’s Experiment and the Concept of Transformation 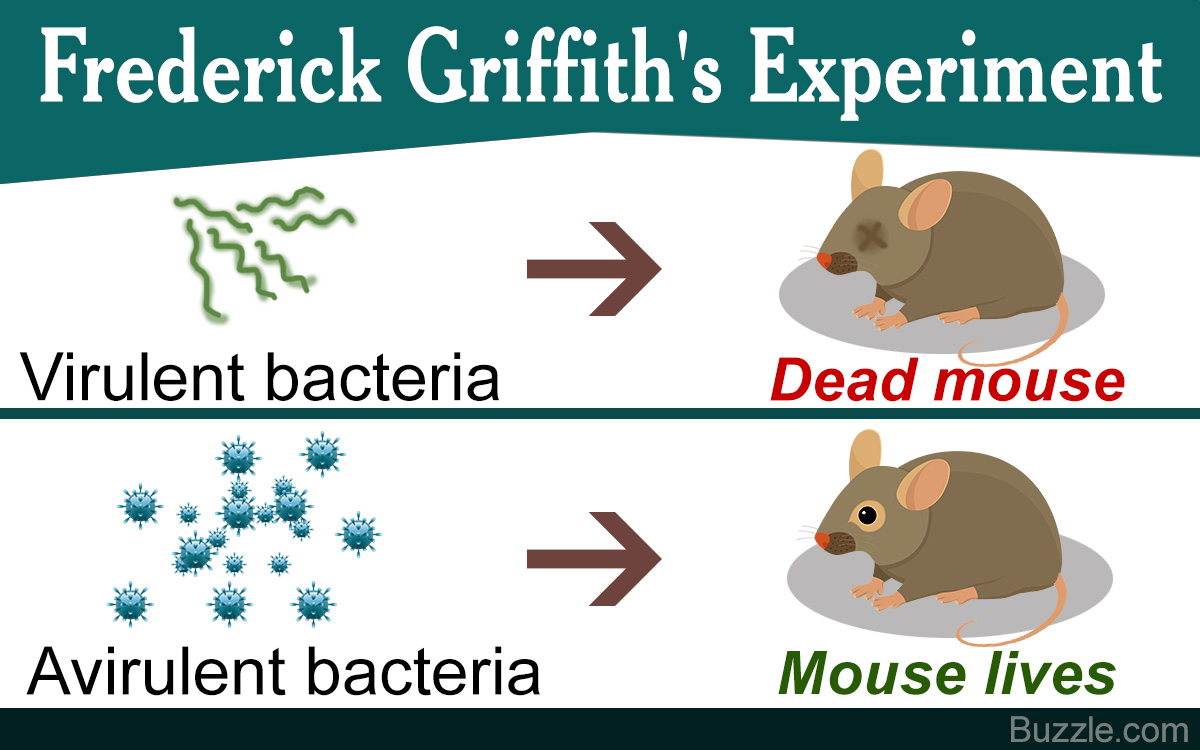 Transformation is a molecular biology mechanism via which foreign and exogenous genetic material is taken up by a cell and incorporated into its own genome. This phenomenon was first described and discovered by British bacteriologist, Frederick Griffith. The concept of transformation and the experiment that led to its discovery are described here.

Other processes by which exogenous genetic material is taken up by a cell include conjugation (transfer of DNA between two bacterial cells that are in direct contact) and transduction (injection of viral DNA by a bacteriophage into the host bacterial cell).

The post-World War I Spanish influenza pandemic influenced Frederick Griffith to study the epidemiology and pathology of bacterial pneumonia in order to attempt creating a successful vaccine. Hence, he carried out experiments, where he injected mice with strains of virulent and avirulent Streptococcus pneumoniae. The experiment he reported in 1928, gave the first description of the phenomenon of transformation, where one bacterial strain could change into the other strain, and this activity was linked to an unidentified element called the transforming factor or transforming principle.

Oswald T. Avery, an American pneumococcal researcher, speculated that Griffith’s experiment lacked appropriate control. However, subsequent, similar experiments carried out in Avery’s laboratory confirmed Griffith’s discovery. The experiments conducted later by Avery, MacLeod, and McCarty, and by Hershey and Chase proved that the transforming factor was DNA and elucidated its exact nature. Thereby, establishing the central role of DNA in inheritance.

For his experiments, Griffith used two strains of Streptococcus pneumoniae that affected mice – type III S (smooth) and type II R (rough). The type III S form has a smooth appearance due to the presence of a polysaccharide layering over the peptidoglycan cell wall of the bacterial cell. This extra coating helps the cell in evading the phagocytosis carried out by the immune cells of the host; hence, allowing the strain to proliferate and become virulent.

In contrast, the type II R form lacks this coating, and hence, has a rough appearance. The absence of the polysaccharide layer leads to its efficient elimination by the host’s immune cells rendering the strain avirulent. While injecting the mice with these bacteria, Griffith devised four sets of inoculation that are as follows:

Type III S bacteria
When the mice were inoculated, the bacterial virulence was exhibited, causing pneumonia, and this eventually led to the death of the mice. On examining the blood of the deceased mice, progeny of the inoculated cells were obtained.

Type II R bacteria
When injected into the mice, the bacterial cells were successfully eliminated by the immune system, and hence, the mice lived. The blood showed no presence of the inoculated cells.

Type III S heat-killed bacteria
When the virulent strain was rendered avirulent by heating and killing it (heat-killed), and then injected into the mice, the strain did not show virulence, and was eliminated by the host’s immune system; hence, the mice survived. Their blood showed no presence of the inoculated cells.

This indicated that the live R strain had assimilated and incorporated the virulent element from the heat-killed S strain in order to transform itself into the virulent S strain. Based on this observation, Griffith concluded that a transforming element from the heat-killed strain was accountable for the transformation of the avirulent strain into the virulent strain. Successive experiments carried out in 1944 by Oswald Avery, Colin MacLeod, and Maclyn McCarty, proved that the element taken up by the harmless strain was genetic in nature.

Transformation is a stable genetic change brought about by the uptake of naked DNA, and the state of being able to take up exogenous DNA is called competence. They occur in two forms―natural and artificial.

Only 1% of the bacterial species is capable of taking up DNA. Bacteria also exchange genetic material through a process called horizontal gene transfer, where bacterial cells conjugate and form a bridge via which the genetic material is transferred from one cell to another. A few bacterial species also release their DNA via exocytosis on their death, and this DNA is later taken up by the bacterial cells present in the vicinity. While transformation can occur between various bacterial species, it is most efficient when occurring between closely related species. These cells possess specific genes that code for natural competence allowing them to transport the DNA across the cellular membrane and into the cell. This transport involves the proteins associated with the type IV pili and type II secretion system as well as the DNA translocase complex at the cytoplasmic membrane.

This mechanism differs slightly due to the difference in the structure of the cell membranes of the bacteria. Bacteria are broadly classified into two types based on this difference – Gram-negative and Gram-positive. The general outline is more or less similar. The presence of exogenous DNA is detected by the cell and natural competence is induced, then the foreign DNA binds to a DNA receptor on the surface of these competent cells. This receptor binding allows the activation of the DNA translocase system that allows the passing of DNA into the cell via the cell membrane. During this process, one strand of the DNA is degraded by the action of nucleases. The translocated single strand is then incorporated into the bacterial genome via the help of a RecA-dependent process.

Gram-negative bacteria show the presence of an extra membrane, hence, for DNA to be taken up, a channel is formed on the outer membrane by secretins. The uptake of a DNA fragment is generally not specific to its sequence; however, in some bacterial species, it has been seen that the presence of certain DNA sequences facilitate and enhance efficient uptake of the genetic material.

It is carried out in laboratories in order to carry out gene expression studies. To impart competence, the cells are incubated in a solution containing divalent cations (calcium chloride) under cold conditions, and then, exposed to intermittent pulses of heat. The concentration of the solution depends on the protein and liposaccharide content of the membrane, and the intensity of the heat pulses varies according to the time duration of the pulses, i.e., high intensity pulses should be for very short periods; whereas, low intensity pulses can be for longer durations.

The divalent cations function to weaken the molecular structure of the cell membrane, hence, making it more permeable. The subsequent heat pulses cause the creation of a thermal imbalance, and in the process of regaining balance, the DNA molecules gain entry via the weakened membrane and into the cell.

Artificial competence can be alternatively induced and promoted via the use of a technique called electroporation. It involves applying an electric current to the cell suspension. This causes the formation of pores in the cell membrane. The exogenous DNA is taken up via these holes, which are resealed via the cell membrane repair machinery.

Saccharomyces cerevisiae can be transformed by exogenous DNA using various methods. Yeast cells are treated with certain digesting enzymes that degrade the cell walls. This yields naked cells (devoid of cell wall) called spheroplasts. They are extremely fragile but have a high frequency of foreign DNA uptake.

Another method that can be used is, exposing the cells to alkaline cations such as lithium (from lithium acetate) and PEG. The PEG helps in pore formation, and the cations in the transport of the DNA fragment inside the cell.

The process of electroporation can also be used for transformation purposes, and efficiency can be enhanced using enzymatic digestion or agitation using glass beads.

Plant cells can also be transformed using viral particles (transduction). Here, the genetic material to be inserted is packaged into a suitable plant virus. This modified virus is then allowed to infect the plant cells. The transfer occurs according to the viral machinery and transformation is achieved. Electroporation can also be used for plant cells.

Introduction of foreign DNA into animal cells is conducted using viral or chemical agents like the ones used in case of plant and bacterial cells. However, since the term transformation is also used to refer to the progression of cancerous growth in animals, here, the term transfection is used.

This concept and technique has seen varied applications in the field of molecular biology with respect to expression studies, gene knockout studies, and cloning experiments. It is also used in the production of genetically modified organisms.