A Brief Understanding of the Major Functions of Lysosomes

Lysosomes are specialized membrane-bound vesicles that contain enzymes for molecular digestion. Owing to these enzymes, they play a major role in recycling of molecules, disposal of cellular debris, cell membrane repair, phagocytosis as well as programmed cell death.

Home / Uncategorized / A Brief Understanding of the Major Functions of Lysosomes 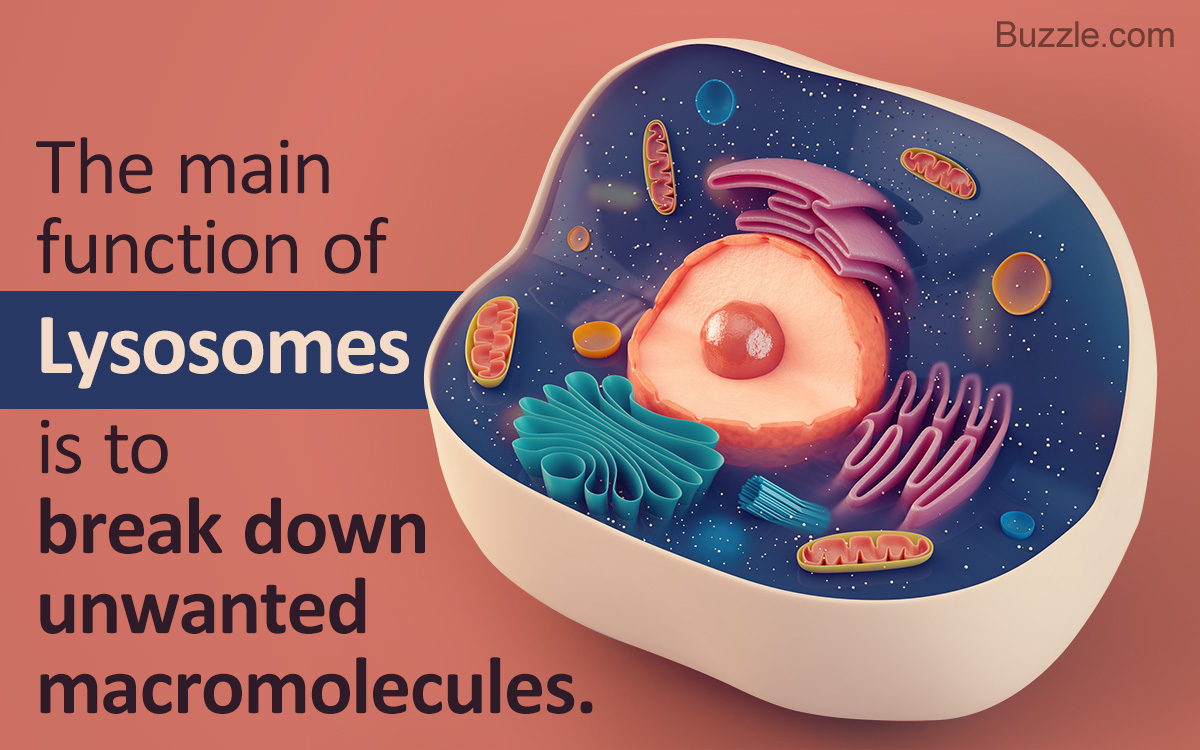 Lysosomes are specialized membrane-bound vesicles that contain enzymes for molecular digestion. Owing to these enzymes, they play a major role in recycling of molecules, disposal of cellular debris, cell membrane repair, phagocytosis as well as programmed cell death.

Lysosomes are spherical, membrane-bound organelles present in the cytoplasm of animal cells. Plant cells rarely contain lysosomes. The word ‘lysosome’ is derived from the two Greek words – ‘lysis’ (destruction) and ‘soma’ (body). These spherical organelles are bound by a phospholipid bilayer and are about 0.2 to 2 μm in diameter. This membrane-bound interior has a pH of 4.8 and contains a set of lytic enzymes called hydrolases, which can collectively digest almost any type of macromolecule. Proteins, lipids, polysaccharides, DNA, RNA, etc., can be hydrolyzed by these enzymes inside the acidic interior of the lysosomes.

Lysosomes are polymorphic and exist as primary, secondary, autophagic and secretory lysosomes. The breakdown of unwanted macromolecules is the main function of these organelles. In addition, they are also involved in cell membrane repair and play a major role in the immune response against foreign bodies like bacteria, viruses and other antigens. A detailed account of the role they play in various cellular processes has been given below.

Autophagy is the intracellular process by which the cell degrades its own components using the lysosomal machinery and recycles the molecules. Damaged macromolecules, malformed proteins, non-functional, long-lived proteins, and damaged and old organelles are all broken down by the lysosomal enzymes. A phospholipid membrane is formed around the target component, resulting in the formation of a vesicle called autophagic vacuole. This vacuole then fuses with the primary lysosome where the hydrolases digest the macromolecules to sugars, amino acids and nucleotides, which are the primary building blocks of every cell. These useful digestion products are released into the cytosol and can be utilized in the synthesis of new macromolecules and organelles, whereas the unwanted products are released outside the cell.

Also, during starvation, or nutrient-limiting conditions, autophagy of normal organelles occurs, thus helping to maintain the level of nutrients required for the normal cellular processes.

Role in Endocytosis and Phagocytosis

Endocytosis is the process for cellular uptake of foreign material. Phagocytosis is a specialized form of endocytosis wherein large bodies such as dead cells, cell debris, bacteria, viruses, etc., are engulfed. The uptake occurs through specialized vesicles which fuse with the lysosomes followed by the degradation of the foreign entity by hydrolases. Directly or indirectly, both these processes play a crucial role in pathogen destruction.

Apoptosis or programmed cell death is a very intricately controlled mechanism of cellular suicide. Such a mechanism is essential during embryonic development and for destruction of old cells, infected cells and cells with DNA damage. Apoptosis is initiated through various pathways in a cell, one of them being lysosome-mediated apoptotic pathway. Certain proteases present in lysosomes have been identified as one of the initiators for such cell death. These proteases lead to a series of signals and events characterized by breakdown of the cellular components. These components are packed into vesicles termed apoptotic bodies which are engulfed by neighboring cells. The lysosomes of the neighboring cells bring about the residual digestion of these components.

Lysosomes are also capable of releasing their digestive enzymes outside the cell to bring about extracellular digestion. During fertilization, the lysosomal contents of sperms are released outside the cell in order to bring about the digestion of the limiting membrane around the egg. This facilitates fusion of the sperm and egg. In addition to this, once the two cells fuse, the paternal mitochondria are destroyed through the lysosomal machinery of the egg. Sperm-derived mitochondria tend to accumulate genetic mutations due to the high metabolic activity of sperms. Hence, they need to be eliminated from the fused cell to avoid the transfer of mutations to the resulting embryo.

Conditions of mechanical stress and pathogenic actions can lead to disruption of certain patches or formation of pores in the cell membrane. The secretory lysosomes fuse with the cell membrane at a location close to the damaged patch. This results in the release of hydrolases outside the cell. Of these hydrolases, a specialized hydrolase called acid sphingomyelinase (ASM) causes the internalization of damaged patch by the cell. Moreover, the fusion of the lysosome with the membrane provides extra lipids and prevents constriction of the cellular boundary.

Lysosomal malfunction leads to about 50 different types of rare inheritable metabolic disorders. New ones continue to be identified.

Defective or missing digestive enzymes lead to the accumulation of substrates within the cell, thus impairing metabolism. Such deficiency or dysfunction of lysosomal enzymes results in several inheritable metabolic disorders that are collectively termed as lysosomal storage diseases. A few major characteristics of these have been given below.

Lysosomal storage diseases are characterized by the presence of abnormally enlarged lysosomes containing accumulated undigested cellular components. The components or macromolecules that accumulate depends on the specific enzyme that is dysfunctional. Pompe disease, Tay-Sachs disease, mucopolysaccharidosis (MPS), and Gaucher’s disease are some examples. In some cases, symptoms like short stature, bone deformities, cardiac and respiratory difficulties, enlarged head, liver and spleen, etc., are observed at birth. However, in some cases, the onset of the disease occurs at a later age and various organs are affected depending on the type of disease. The life expectancy is highly variable and those with severe forms may survive up to 5-10 years of age. These diseases are currently incurable and the treatments available mostly lessen the symptoms.

Lysosomes isolate the digestive enzymes in the cell and keep them sequestered from the other cellular parts. This “intracellular digestive system” called lysosome plays an important role in cell survival and maintaining the integrity of the cell.