A Helpful Guide to Understanding Somatic Mutation With Examples 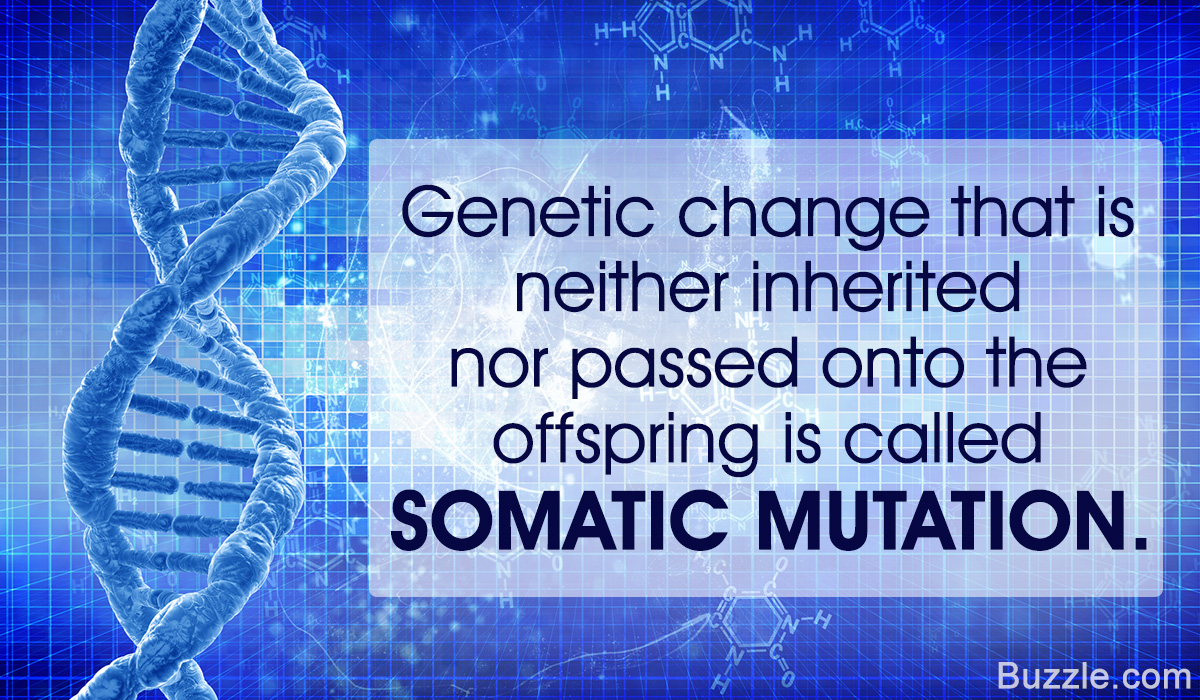 The occurrence of a somatic mutation in the early stages of embryonic development or during the fusion of two zygotes, leads to an organism possessing more than one distinct set of DNA, and is called a chimera.

Somatic mutations are mutations that the genetic material of an organism acquires after its conception. They are called somatic due to their occurrence in the somatic (non-reproductive) cells of the organism. Since these mutations do not occur in the germ cells, they cannot be passed onto future progeny, and hence are also not inherited from the parent organism. Despite their non-hereditary nature, the risk of occurrence of a somatic mutation increases in the presence of other inheritable genetic factors and mutations. They are caused primarily due to environmental factors such as exposure to UV radiation, viral and bacterial infections, ingestion of toxic materials, faulty DNA repair, and unhealthy lifestyle choices.

The occurrence of somatic mutations in a cell alter the genetic material of that cell and all the cells produced by its division, thus forming a mass of cells that possess a different genetic make up from that of the other cells of the organism. In some cases, if the mutations occur at a very early developmental stage, they lead to a condition where the organism may exhibit two or more sets of distinct sets of DNA throughout its body. Such an organism is called a “chimera”. It is named after the Greek mythological creature of the same name, that was composed of parts taken from various different animals. A chimera is also formed when two fertilized eggs (zygotes) merge in utero to form a single embryo that has two sets of DNA. In some cases of chimerism, it has been observed that the mutated region of the body is later rejected by the rest of the body, and antibodies are produced against it.

Chimerism and somatic mutations are often mistaken for each other in case of alterations in phenotypes of an organism. In order to be sure of the cause, one must carry out DNA testing.

The most common method of detecting somatic mutations is to obtain a DNA sample of the mutated cells as well as the non-mutated normal cell of the individual. Both samples are then purified and their DNA is sequenced. Once their sequences are obtained, they are compared and matched to identify sequence variation and deviation, to identify the mutated sites.

An alternative way would be to probe both samples with various DNA markers, and then compare and analyze the pattern obtained. The change in the pattern would point to the mutated site.

Somatic mutations that give rise to chimerism or mosaicism, give rise to a variety of disorders. The occurrence of mutations within the coding region of a gene, interrupts the gene sequence and also the gene function. The alteration of the function of that particular gene leads to malfunctions in the cellular pathways dependent on that gene product. The most common disease caused by these mutations is cancer. Other diseases that are caused by this type of mutation include –

Occasionally, somatic mutations may also give rise to hermaphroditism.

A common example of somatic mutations in dogs is the variation in the color of the fur coat. In case of breeding between dogs of the same breed with different coat colors, the pups that are born usually exhibit coat colors of either one of the parents. But in some cases, where somatic mutations arise, the resultant pup exhibits a coat with colors of both parent’s coats.

For example, a yellow Labrador is mated with a brown Labrador, each of the pups is expected to be either yellow or brown. However, in the event of somatic mutations, the mutant pup would show a coat with both yellow and brown colored patches. Somatic mutations also give rise to other characteristics such as white colored paws (resembling socks) and different patterns of pigmentation or discoloration across the animal’s body.

Unusual and unexplained colorings that are seen on a horse’s coat that are not in accordance to the markings of its breed are usually caused due to the occurrence of somatic mutation. The mutations cause the coat to exhibit white, black, and gray markings on the animal’s body. They may be in the shape of patches or spots. The different markings that arise due to mutations are called various names according to the pattern observed. A rabicano is characterized by a smattering of white hair along the body of the horse and a whitish skunk tail. The pangare condition exhibits a sort of shading effect across the body of the animal, and a bloody shoulder shows the presence of wine colored marks or spots on the shoulder. In most cases, the mutation is exhibited in the form of random colored patches or streaks on the body.

Immunoglobulin genes that code for antibodies, are made up of variable (V), diverse (D), joining (J), and constant (C). The diverse region binds to the specific variable region and to a joining region, forming a VDJ section. This section, with the help of the J region, binds to the C regions, thereby producing a specific antibody. The D, J, and C regions remain more or less the same for all the antibodies. The unique character of each antibody is imparted to it via the changes in the variable region (V). The 4 regions combine variably, hence giving rise to a variety of antibodies in the system.

In the presence of antigens, microbes, or foreign molecules, the cells initiate a cellular mechanism through which the immune system is altered so as to subdue and eliminate the foreign particles. This occurs via a process called somatic hypermutation. It is initiated when a B lymphocyte cell recognizes the presence of an antigen, and stimulates its own proliferation. During the course of this rapid division, the variable regions of the immunoglobulin gene are stimulated to possess a higher rate of mutation than normal, giving rise to hypermutated variable regions. This in turn introduces even higher diversity in the type of antibodies being produced in response to an antigen. These mutations are induced only in response to immunogenic stimulation, and are not hereditary.

The most common disease caused due to the occurrence of somatic mutations is cancer. Cancer arises due to two types of functional mutations that occur in particular genes.

► Gain of Function Mutation – These mutations usually occur on proto-oncogenes. These are genes with normal cellular functions that gain cancerous properties when mutated. On mutation, this gene would turn into an oncogene.

► Loss of Function Mutation – These mutations occur on tumor suppressor genes or (anti-oncogenes) such as p53 or rb, which keeps the cellular processes in check and regulates the cell cycle by repression. In the event of mutations on this gene, it loses its function, and the control on the cellular proliferation is lost, thereby allowing the cell to progress to a cancerous state.

The occurrence of mutations in these genes follows Knudson’s two-hit hypothesis. The hypothesis claims that both the alleles of a tumor suppressor gene must be mutated, for the cancer to progress.

The 1st hit – It refers to the mutation and loss of function of one of the alleles of the anti-oncogene. In hereditary cases, individuals are born with the first hit, but in cases of sporadic carcinogenesis, the individuals acquire this hit. Its occurrence gives rise to a heterozygosity of the alleles, where, despite the loss of one allele, the other allele compensates and functions normally.

The 2nd hit – It refers to the loss of function mutation acquired by the remaining normal allele. This causes a loss of the heterozygosity, and since no functional allele is now present to control the cell proliferation, the cells proliferate uncontrollably, and the individual develops cancer.

In case of animals, the study of somatic mutations is important in order to understand the basis for various phenotypes, and also the basis for non-hereditary disease. It would also aid in resolving diseases with the development of targeted gene therapy and personalized medicines.