Germline Mutation Vs. Somatic Mutation: A Comparison You Wanted 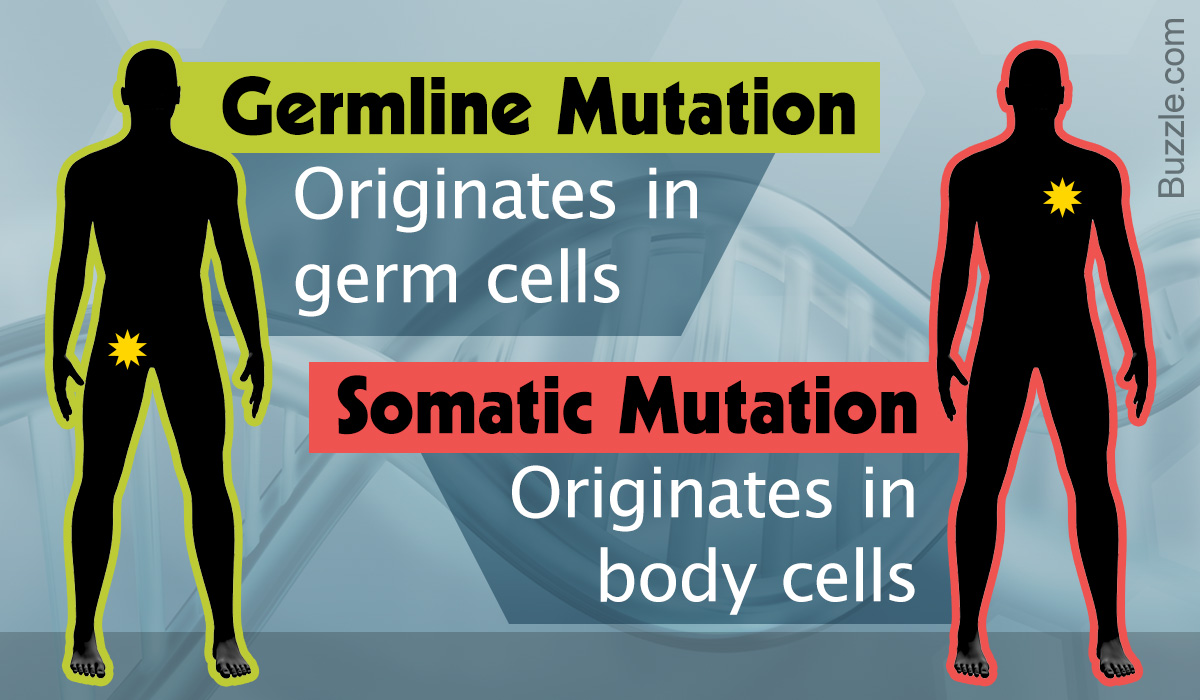 The main difference between germline and somatic mutation lies in the fact whether they are heritable or not. But, there’s more to it. This BiologyWise post gives a systematic comparison of germline mutation vs. somatic mutation, including aspects like the cause, heredity factors, effects, and much more.

Modern research has shown that all people with blue eyes have a single, common ancestor. This is because of a genetic mutation which took place about six to ten thousand years ago.

A mutation is the alteration in the DNA sequence which makes up a gene. This DNA is the hereditary material passed by an organism to its future generations, and forms an essential part of the continuation of life on Earth. It is made up of different components, such as sugar, phosphate molecules, and nitrogen base pairs. Most mutations involve changes in the order or type of these parts, like substitution, deletion, addition of nitrogen bases, or even a shift in the order of the base triplets, known as a frameshift. Such changes in the DNA, called mutations, are caused by various factors, like incorrect copying of DNA during replication, environmental factors like excess heat or cold, and exposure to chemicals or radiation. Such causes of mutations are known as mutagens.

Mutation can be divided into two types based on the tissue where it occurs. When the mutation occurs in the germ cells, it is called germline mutations. The germ cells are involved in transmitting genetic material to future generations, and they include the cells which form the gametes, and even the gametes themselves. Needless to say, such mutations are passed on to the offspring. The other type of mutation can occur in every cell of the body, except the aforementioned germ cells. This type is called somatic mutation, named after the somatic cells or body cells where they occur. Understanding the differences between germline and somatic mutation will help understand this concept better. 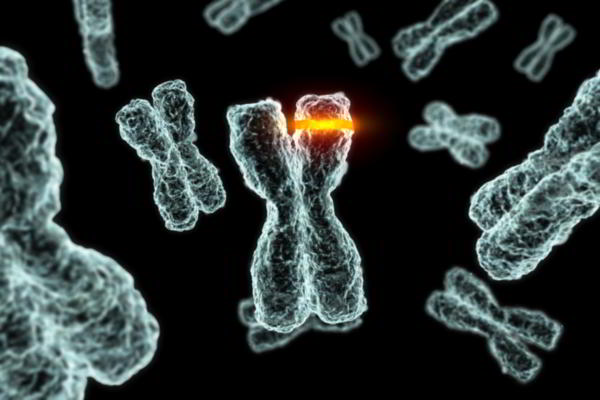 Germline mutations occur as a result of changes in the DNA of germ cells. Germ cells are those cells that produce gametes, more specifically spermatogonia in males and oogonia in females. In males, these occur in the testes, while in females, they occur in the ovaries.

Somatic mutations are a result of changes in the DNA of somatic cells, also called body cells, of an organism, and not in the germ cells. Examples of body cells include the cells of the skin, liver, bone marrow, eyes, etc.

Germline mutations are hereditary in nature, since they occur in the gametes which participate in fertilization. Thus, the death of the parent organism where the mutation originally occurred will not erase the mutation, since it has already been passed down to future generations.

These mutations occur in the sex cells or gametes, which unite during the act of fertilization to form the zygote. Each gamete donates half of its genetic material to the zygote, so any mutation in one of the gametes will surely be passed to the offspring. The zygote then forms the embryo by cell division, which eventually grows into the organism’s body. Thus, the genetic material of one cell (zygote) is distributed in all the adult organism’s cells. As such, the mutation is found in both, germline and somatic cells. Moreover, the gametes produced by the offspring will also carry the mutated gene, which is passed to the future generations.

In most cases, germline mutations are ‘silent’, which means that they do not show any effect in the parent organism in which they originally occurred, except in cases when they affect the gamete production. The mutations contribute to a healthy genetic diversity in the population, though, they can cause negative impacts, like diseases in rare cases, and even cancer.

These mutations show their effects, if any, only in the cells where they occur. Though, in most cases, they show no effects and contribute to genetic diversity. They can show harmful effects in some cases. These include damage caused to the cells, cancerous growth, or death of the cell.

Somatic mutations are often visible as a ‘sector’ in the particular tissue where they occur. This is because, the cell where the mutation originally occurred has divided to form several daughter cells. These cells are located close to each other, and thus, their appearance contrasts with the surrounding wild-type cells.

Germline mutations occur during a type of cell division called meiosis. This is because, sex cells need to split their chromosomes in half so that the original number of chromosomes is restored during fertilization. There are more chances of such mutations occurring in the sperms than in the egg, because, more number of cell divisions occur during formation of the former than the latter, which makes germline mutation rate higher in males.

Somatic mutation occurs during mitosis, since all body cells divide by this process only. This is because, mitosis produces daughter cells with an equal number of chromosomes, which is vital to maintain the human chromosome number in the cells. Besides, they don’t have to undergo fertilization, like the sex cells.

The detection of germline mutation in an offspring relies on denying the possibility of meiotic segregation of chromosomes or recombination as being the likely causes in the difference in phenotype between parents and offspring.

The detection of mutation in somatic cells is based on proving that the phenotypic differences between the affected cells and the surrounding
wild-type cells is not due to mitotic segregation or rearrangement of genetic material.

Hemophilia in European royal families is the most popular example of such mutations. This disease causes the failure of blood to clot, which can even cause a person to bleed to death due to an injury. It is said that the disease was passed down by the germ cells of Queen Victoria, or her parents, to succeeding generations. Only male members of the family were affected by the disease.

Sickle cell anemia is a condition in which the red blood cells produced by the bone marrow are crescent or sickle-shaped. These contain an abnormal type of hemoglobin, and the disease causes organ damage, along with pain and infection. It is rampant in African countries where malaria outbreaks are common. It is caused due to a mutation in the gene coding for hemoglobin. When a person carries one copy of the gene, the sickle-shaped cells are beneficial by retarding the spread of the malarial parasite in the body. But, carriers of two copies of the gene suffer from the disease, which is hereditary, as the germ cells carry the mutation.

Porphyria is a disorder which is characterized by skin problems and mental illness. It is caused by mutation of the gene involved in the production of hemoglobin by the heme pathway. In South Africa alone, more than 8,000 people carry the mutated gene, which is thought to have originated from only one couple: Ariaantje Jacobs and Gerrit Jansz. This couple migrated to South Africa from Holland, sometime in the 17th century, and either one of them passed down the mutated gene via their germ cells.

The best example of somatic mutation is the development of cancer. Due to certain carcinogens like UV light, radiation, chemical exposure, etc., a mutation occurs in the proto-oncogene. This gene controls the rate of cell division, and the effect of the mutation is manifested by rapid uncontrolled growth in cells. This leads to the formation of a tumor at the site. If the DNA of the tumor cells is sequenced, then the mutated gene will be seen in all cells. However, this mutation is not passed down to offspring, because it does not occur in the germ cells, like the sperms or ovum.

Coat’s disease is a disorder that causes an uncontrolled blood vessel formation in the retina of the eyes, which can lead to blindness. It is caused by mutation of the NDP gene which controls blood vessel development. This mutation occurs in a single cell of the eye, and is not hereditary.

Occurrence of brown spots in the iris of the eye, and strands of white hair on the scalp, are some harmless instances of somatic mutation. In both cases, the mutation occurs in the gene which codes for the color of the iris and hair, respectively. This mutation occurs in a single cell only, and as explained before, by asexual cell multiplication the mutant ‘sectors’ are formed. They can be visibly differentiated from the surrounding wild-type cells due to the color contrast.

Despite such major differences, somatic mutations can be inherited in plants, just like germline mutations. This is because, both, the gametes and the body tissues of the plant have originated from the meristem. This property has been exploited by horticulturists in the production of the ‘Red Delicious’ variety of apples. When a particular apple tree shows beneficial somatic mutations, its branches are cut and grafted on the stem of a normal apple tree. When this graft becomes established, its branches are similarly grafted on other apple trees, thus spreading the beneficial mutation to other trees as well.