Examples of Seedless Vascular Plants and Their Characteristics

Home / Uncategorized / Examples of Seedless Vascular Plants and Their Characteristics 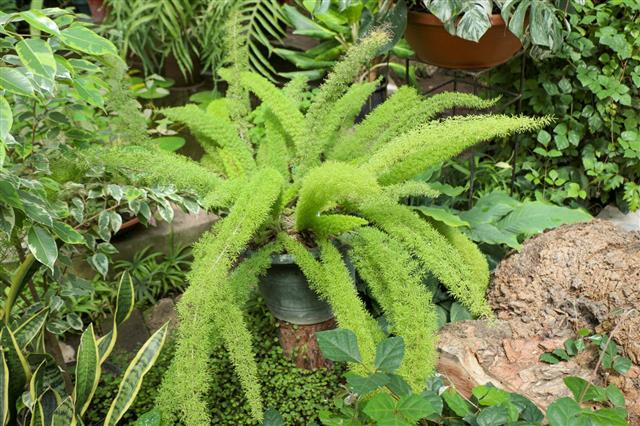 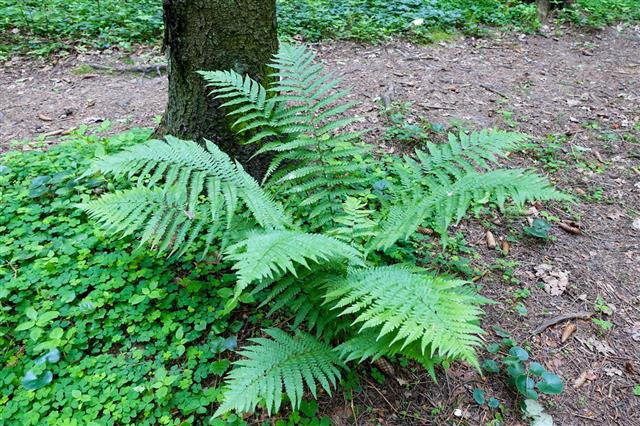 The spores of Lycopodium (fern), being highly inflammable, were used in older camera flashes and pyrotechnics.

Unlike vascular plants, these plants are not differentiated into true stems, roots, and leaves. They use simple, root-like mechanisms, called rhizoids, to draw water from the soil. Non-vascular plants are commonly described as a ‘carpet of green’, because their small gametophyte is dominant over the sporophyte.

Vascular plants can be divided into two main types: seedless and seed-bearing. Seedless plants are those which do not reproduce by producing seeds like seed-bearing plants. Rather, they produce a larger number of small, single-celled spores. Most of the trees one might encounter in a contemporary forest today would be seed-bearing, vascular plants. While seedless vascular plants once ruled the entire planet, massive climate changes spanning hundreds of millions of years have now relegated them to specific parts of the world, like the tropics. These plants are well-known for their extremely long maturation period. The characteristics of seedless vascular plants, along with some of their best examples, are given here.

These plants are some of the oldest land plants on Earth, first originating in the Silurian Period around 40 million years ago. During the Carboniferous Era, they were so abundant that their remains accumulated faster than they could decompose, resulting in the massive reserves of coal that we use today. At that time, they grew as large as 98 feet tall, though such large species became extinct later.

Seedless vascular plants are characterized by the presence of true roots, stems, and leaves, though sometimes these parts cannot be clearly distinguished from each other. In a few cases, the leaves and roots arise from underground stems, called rhizomes, which also store food. The plants show prominent stomata which can’t close, and a vascular cuticle which covers the whole body, thus preventing water loss.

They contain vascular tissues which transport substances from one part of the plant to the other. They are:

Xylem: They transport water and minerals from the soil to the other parts of the plant. They consist of a network of lignified, tube-like, dead cells, that along with transport, provide structural support to the plant.

Phloem: Phloem consists of a tubular chain of living cells that transports sugar, amino acids, and other food materials prepared in the leaves during photosynthesis to other plant parts.

These vascular tissues helped the plants grow much taller and wider, as compared to non-vascular plants, as they transport nutrients and food all through the plant’s body. Growing taller is an evolutionary advantage, as the plant could reach the canopy height to obtain sunlight, while blocking out the light from reaching its competitors. This larger size also triggered evolutionary changes in other organisms, like arthropods and vertebrates, by providing them with more diverse food sources.

These plants propagate by releasing spores, which differ from seeds in several aspects. The multicellular seeds are a result of sexual reproduction, while spores are unicellular and a method of asexual reproduction. Seeds are hardier and carry more nutrients for the developing embryo, while spores, being smaller, carry less food. Seeds can be dispersed in various ways, like by animals, water, and wind, and germinate wherever they contact soil. Spores can only be dispersed by the wind, and require moist soils to germinate.

The life cycle of seedless vascular plants shows an ‘Alternation of Generations’. First, the sporangium releases many spores, formed by meiosis, which germinate in moist soil to form a haploid gametophyte. This gametophyte contains the antheridia (male sex organ) and the archegonia (female sex organ) together on one plant. The antheridia releases sperms which travel to the archegonia to fertilize the egg. The sperm and egg unite during fertilization to form a diploid zygote. This zygote develops into an embryo, that finally grows into a mature diploid sporophyte which can again release spores. So, the life cycle of each plant alternates between the diploid sporophyte and the haploid gametophyte, which is called alternation of generations.

Another major difference between seed-bearing and seedless vascular plants is, in the former, reproductive tissues like flowers are aerial in nature and grow high above the ground. On the other hand, in the latter, the gametophyte, which contains the sexual organs (antheridia and archegonia), grows close to the ground. The long-lived sporophyte grows on the gametophyte, which is between a few millimeters to a meter in size.

Seedless vascular plants occur most commonly in the tropical rain forests and moist temperate forests, since the sperm produced in the gametophyte is flagellated and requires moisture to swim towards the egg. They are found along the banks of rivers, lakes, streams, and ponds.

► The stems branch out in a dichotomous pattern, which gives it the appearance of a whisk broom, and hence the name.

► It is found in the tropical and sub-tropical regions in Asia and the Americas. These grow as weeds in greenhouses, and are also grown as ornamental plants.

► True roots and leaves are absent, so photosynthesis is carried out by the green stem. Nutrients and water are absorbed by underground rhizomes, with rhizoids that are similar to root hair. The rhizome is heavily branched.

► There is no difference between stem and underground vascular tissues. The vascular tissue is in the form of a central cylinder, containing the xylem and phloem.

► The mature sporophyte stem forms small buds on the rhizome.

► The stem bears many sets of scale-like sacs or lobes called sporangia, which produce spores. They are yellow and trilobed in appearance.

► After germination, the spore forms an underground gametophyte which is non-photosynthetic, and obtains nutrition by forming an association with fungi. It is about the size of a small piece of macaroni.

► The gametophyte is bisexual, bearing both male (antheridia) and female sexual organs (archegonia).

► After fertilization, the zygote develops a foot and a rhizome. The stem develops when the foot detaches from the rhizome.

► It has more than 200 species, which are found in the tropical regions.

► The plant resembles a moss or an immature pine tree.

► Its sporophyte has both, vertical and horizontal stems called runners, which help in the propagation of the plant. The vertical stems are about 30 cm long.

► The leaves are specialized to form sporophylls, which are clustered at the apex of the stem to form strobili that produce spores. The plant gets its name from the club shape of the strobili.

► The stem is dichotomously branched, and it bears reduced leaves which are similar in appearance to the sporophylls.

► In some cases, the leaves are fused at the bottom of the stem to form a ‘foot’. The word Lycopodium means ‘wolf feet’.

► Its sporophyte is homosporous in nature.

► The subterranean gametophyte is heterotrophic in nature, which means that it forms associations with fungi to obtain a part of its nutrition. However, some gametophytes are strictly autotrophs, which obtain all their food by photosynthesis. They grow above the ground.

► The gametophyte can take between 6 to 15 years to mature fully.

► Equisetum is the only surviving genus from the entire ‘Horsetails’ group of plants.

► It grows around water bodies and at the borders of forests.

► Ancestors of this plant were tree-like. However, modern plants can only reach a maximum height of 3 meters.

► The sporophyte consists of a ribbed stem with joints that arise out of a rhizome. Whorls of leaves arise from the nodes of the stem. Both, the leaves and stem are photosynthetic. The whorled shape of the branches makes this plant look like a horse’s tail or a bottle brush.

► Its stem is hollow, and consists of two types of interior channels. The larger channels are filled with air, while the narrow channels contain water.

► Spore-producing, pineapple-like swellings, called strobili, are present at the tip of the stem.

► Also known as scouring rushes, horsetails contain an outer epidermal layer of silica. Because of their hardness, in the past they were used to scrub pots.

► The sporophyte is homosporous. The spores have attached ‘elaters’ that help in wind dispersal and are sensitive to humidity.

► The gametophyte is independent of the sporophyte. It obtains all its energy from photosynthesis.

► The rhizome produces true roots along its length.

► Its vascular system is in the form of a ring, called an eustele.

► Most of the coal deposits found today are from the remains of the Carboniferous Era fern forests.

► Some varieties of the plant can grow to be 24 meters high.

► It has an underground stem called a rhizome, which gives off roots from its sides.

► Leaves emerge from the stem in rolled-up whorls, called fiddle-heads, which uncoil with growth.

► Leaves are in the form of ‘fronds’, which consist of individual leaflets.

► Its sporophyte is larger than the gametophyte, which is heart-shaped and short-lived. Both are autotrophic in nature, i.e., prepare food independently by photosynthesis.

► Spores occur in clusters, called sori, at the underside of the leaves. The plant is homosporous. The spores are protected by a thin flap of tissue, called the indusium.

► The gametophyte is bisexual, and a sperm from one plant may fertilize the egg of either, the same or another plant.

► The sporangium has a spring-like mechanism, which allows the spores to be flung out from the frond.

► It is used for ornamental purposes for making baskets, hats, and in folk medicine. The fiddle-heads are often consumed raw.

While ancient forests, 300 – 400 million years ago, were composed almost entirely of huge, seedless vascular plants, the subsequent drying-up of the environment caused many of their species to go extinct. As a result, these plants comprise only 5% of all modern living plants at present. 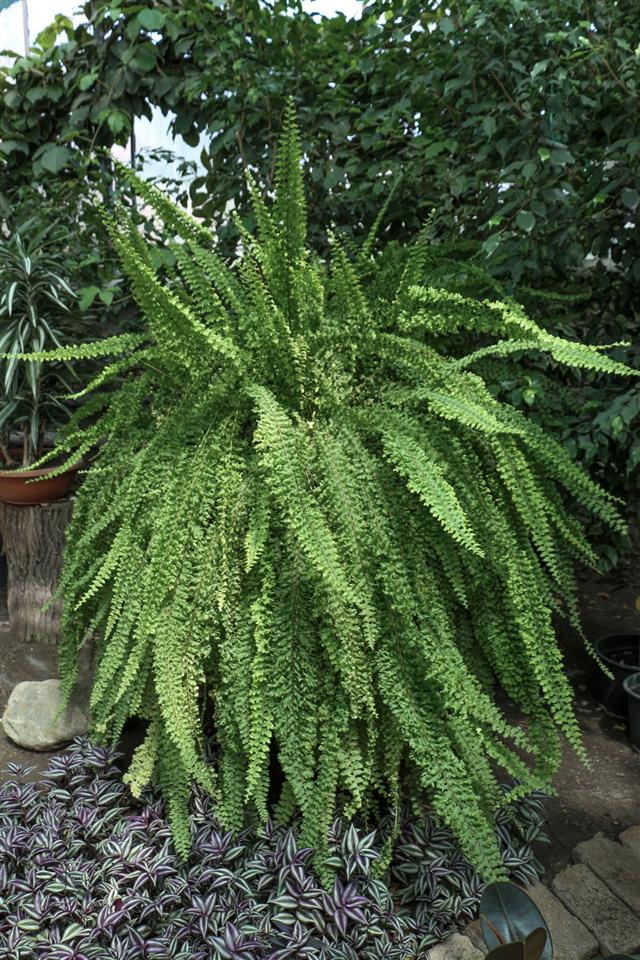