Cocci are spherical bacteria having a diameter of 0.5 to 1.0 micrometer. They often occur in pairs (diplococci). Staphylococci (grape-like clusters) and streptococci (long chain-like patterns) are their other two forms. Read this BiologyWise article for some interesting facts about cocci.

Cocci are spherical bacteria having a diameter of 0.5 to 1.0 micrometer. They often occur in pairs (diplococci). Staphylococci (grape-like clusters) and streptococci (long chain-like patterns) are their other two forms. Read this BiologyWise article for some interesting facts about cocci.

Bacteria have a simple cellular structure, as they do not have a true nucleus or membrane-bound organelles like mitochondria. They are believed to be among the first living beings to appear on Earth.

Although all bacteria seem to be identical, that is definitely not the case. When viewed under the microscope, a single bacterium has different shapes varying from rod (bacilli) to spherical (cocci). Unlike bacilli that have a large diameter, cocci are among the smallest and show several distinct arrangements.

The word coccus derives itself from the Greek word for berry. Cocci are one of the two basic bacterial forms, the other being bacillus. This classification, as you know, is based on their shape. Cocci are further classified on the basis of their aggregations; i.e. the numbers and patterns in which they occur. While some cocci cause diseases in humans and animals, some are useful. This article discusses cocci in greater detail, with the help of some important facts about them, pertaining to their structure, organization, and reproduction, and also gives you examples of harmful and useful bacteria. 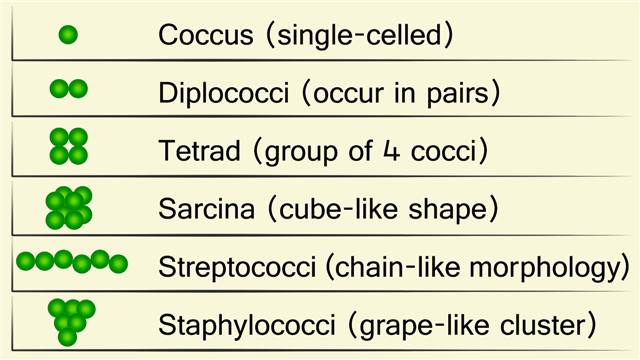 Cocci, like other bacteria, can be gram-positive or gram-negative. The gram-positive cocci are usually harmless but become active and cause infections when they gain access to the internal body sites. They are notorious for causing skin and lung infections. Gram-negative cocci are obligate pathogens, which means they need to cause an infection, without which they cannot spread from one host to another. Neisseria meningitidis and Neisseria gonorrhoeae are some examples of this type.