The 4 DNA Bases and Their Strict Pairing Rules

The DNA of all the living beings is composed of just four bases i.e. Adenine (A), Thymine (T), Guanine (G), and Cytosine (C). The various juxtapositions of these 4 bases give rise to the genetic codes of all the biota on the planet. Know more about these DNA bases in this post.

Home / Uncategorized / The 4 DNA Bases and Their Strict Pairing Rules 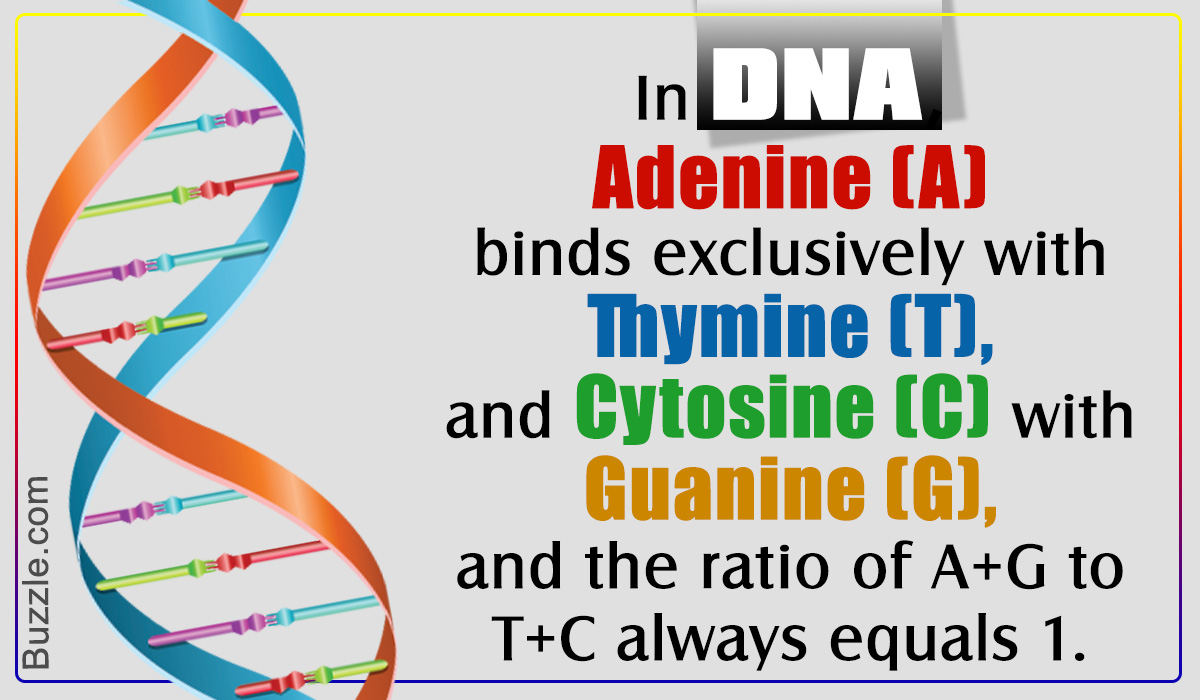 The DNA of all the living beings is composed of just four bases i.e. Adenine (A), Thymine (T), Guanine (G), and Cytosine (C). The various juxtapositions of these 4 bases give rise to the genetic codes of all the biota on the planet. Know more about these DNA bases in this post.

In 1962, James Watson, Francis Crick, and Maurice Wilkins received the Nobel prize for their discovery of the chemical structure of DNA, and its base pairing pattern.

With the discovery of the chemical structure of DNA, by Watson and Crick in 1953, the double helical structure of DNA and the arrangement of the bases in the said structure was revealed. The structure consists of two DNA strands linked to each other with the help of hydrogen bonds, and arranged in a spiral manner. It shows the presence of four unique nucleobases, whose arrangement in random sequences leads to the formation of the genetic code of an organism. A nucleobase is an alternative term used for a nitrogenous base.

These nitrogenous bases in conjugation with a deoxyribose sugar, are called nucleosides. When they gain one or more phosphate groups, they are then termed as nucleotides. Nucleotides use these phosphate groups to link together via the formation of phosphodiester bonds, and bond to their complementary bases using hydrogen bonds. Due to the presence of deoxygenated ribose sugars, the structure, DNA, is called deoxyribonucleic acid. The four bases can be divided into two categories based on their chemical structures.

Pyrimidines are heterocyclic aromatic compounds, that have a molecular structure similar to that of pyridine molecules. It falls under the category of diazines, which are benzene rings that contain 2 nitrogen atoms. Pyrimidines exhibit the presence of nitrogen atoms at the 1 and 3 positions of their ring structure. There are two types of pyrimidines in the form of DNA bases.

The chemical IUPAC name for cytosine is 4-aminopyrimidin-2(1H)-one. It is a pyrimidine derivative with substitutions of an amine group at 4 and a keto group at 2 positions. It was first discovered from calf thymus tissues, by Albrecht Kossel and Albert Neumann in 1894. It is found in DNA as a nucleotide, cytidine. Methylation of cytosine yields 5-methylcytosine, whereas its hydroxylation yields 5-hydroxymethylcytosine. It occurs in DNA as deoxycytidine triphosphate (dCTP).

The chemical IUPAC name for thymine is 5-Methylpyrimidine-2,4(1H,3H)-dione. It is formed by the methylation of the uracil molecule at the 5th carbon. It was discovered alongside cytosine, by Kossel and Neumann. It forms the nucleotide, thymidine. In presence of UV light, this base forms dimers between two adjacent thymidine molecules along the DNA strand. It occurs in DNA as deoxythymidine triphosphate (dTTP).

Purines are heterocyclic aromatic compounds with an imidazole ring fused to the pyrimidine ring. They were first synthesized by Emil Fischer in 1899, by treating uric acid with phosphorous pentachloride to produce purines. They are also naturally found in high concentrations in meat and meat products. There are two types of purines in the form of DNA bases.

Its chemical IUPAC name is 9H-purin-6-amine. It is a purine derivative with an additional amine group at the 6th position. It was named and identified by Albrecht Kossel in 1885. He isolated it from pancreatic tissues. It forms the nucleotide, adenine. Its triphosphate form, adenosine triphosphate (ATP) is extensively utilized in cellular processes as the basic form of chemical energy. In its other phosphate forms, it plays the role of catalyst and co-factor. It occurs in DNA as deoxyadenosine triphosphate (dATP).

Its chemical IUPAC name is 2-amino-1H-purin-6(9H)-one. It is a purine derivative with a carbonyl bond at the 6th position. It was first isolated from excreta of sea birds in 1844, and termed as guano. Later Emil Fischer determined its structure, and synthesized it from uric acid. It forms the nucleotide, guanine. Its monophosphate form, guanosine monophosphate (GMP), when salted out, acts as a flavoring agent that imparts an umami taste. It occurs in DNA as deoxyguanosine triphosphate.

Base Pairing in DNA

The rules for DNA base pairing were laid down based on the experimental findings of Erwin Chargaff. Later, when Watson and Crick established the structure of DNA, the concept of base pairing was more comprehensively understood. The deductions regarding the base pairing of nucleotides in DNA molecules is as follows.

Therefore it can be inferred that,

The chemical nature of the bases and the base pairing rules, defined by experimental evidence, determine the way the nucleotides interact with each other and form the structurally stable double helical DNA strands.