Digestive System of a Frog Aptly Explained With a Labeled Diagram

The major organs involved in the process of digestion in frogs include mouth, pharynx, esophagus, stomach, small intestine, large intestine, and cloaca. Accessory organs such as the liver, pancreas, and gallbladder are also an important part of the digestive system of frogs. This BiologyWise post provides a labeled frog digestive system diagram to help you understand the digestive process in frogs. 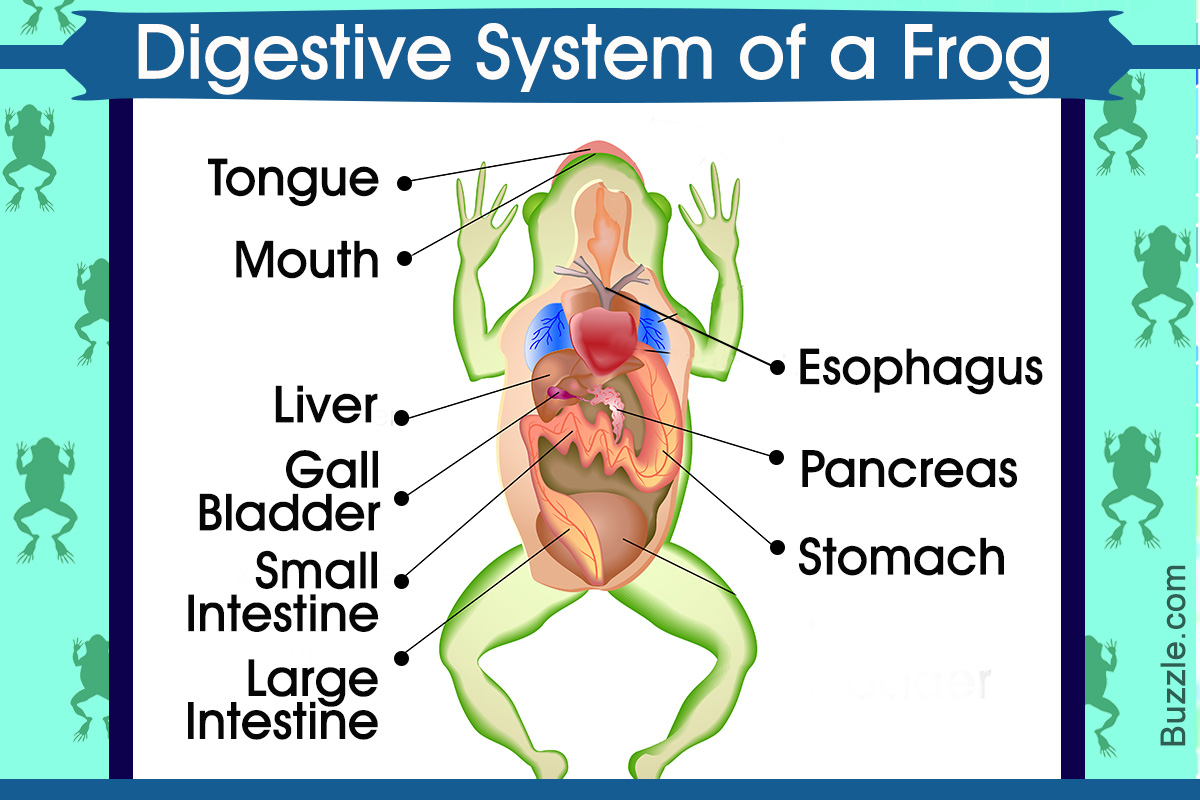 The major organs involved in the process of digestion in frogs include mouth, pharynx, esophagus, stomach, small intestine, large intestine, and cloaca. Accessory organs such as the liver, pancreas, and gallbladder are also an important part of the digestive system of frogs. This BiologyWise post provides a labeled frog digestive system diagram to help you understand the digestive process in frogs.

After catching their prey, frogs close their eyes and retract them through the holes in their skull. This helps them push food down the throat.

Frogs belong to Amphibia class and subphylum Vertebrata, which means that they are a class of vertebrates that live on land, but breed in water. They are a part of Anura order. The term Anura means ‘without tail’, and this taxonomic group comprises frogs and toads. The characteristic features of these amphibians include short bodies, the absence of tail, long hind legs that allow them to leap, webbed fingers and toes, and protruding eyes. The anatomy of frogs has been of interest to humans due to the striking similarities in the organ systems of frogs and humans. Frogs have a single body cavity in the trunk. Referred to as coelom, this body cavity houses all the internal organs. Their head contains the brain, mouth, eyes, ears, and nose.

Like humans, the digestive system of frogs consists of the digestive tract, which in turn comprises organs such as the mouth, pharynx, esophagus, stomach, small intestine, large intestine, and cloaca. Accessory organs and glands such as the tongue, teeth, salivary glands, gastric glands, pancreas, liver, and gallbladder perform functions that are essential for the process of digestion. These organs work in tandem to digest or break down the ingested food into smaller molecules or nutrients, which are easier to absorb and assimilate. These nutrients are absorbed into the bloodstream, and utilized by the cells and tissues of the body for carrying out the vital body processes. To get a better understanding of the location of the organs and functions of the digestive system, a labeled diagram of the digestive system of frogs has been provided below.

Major Internal Organs of a Frog

The digestive process of frogs starts with ingestion, which involves catching their prey (flies, spiders, worms, slugs, other insects, and smaller animals that can fit into their mouth) with their sticky, cleft or bilobed tongue, and swallowing it. The tip of the tongue is folded backwards. Frogs don’t have strong teeth like humans. They have two sets of teeth in the buccal cavity. They use their maxillary teeth (located in the upper jaw) for holding on to the prey. Their sticky tongue prevents the prey from fleeing. Frogs mostly swallow their prey whole. This process is referred to as deglutition. While doing so, they blink or close their eyes, pushing them down through openings in the skull. This helps to propel the food towards the esophagus. In the buccal cavity, the tongue mixes the ingested food with saliva, which is secreted by the salivary glands. Saliva helps in the conversion of starch to sugar. It must be noted that some frogs don’t have tongues, and they catch their prey and place it in their mouth through their front limbs or legs.

After the food is moistened by the saliva, it moves from the mouth into the pharynx. Thereafter, it moves into the esophagus. As in case of humans, an esophagus is a small tube that is located in the anterior section of the digestive tract. It connects the mouth to the stomach, and acts as a passageway for food. It pushes the food into the stomach, wherein starts the process of breakdown of food into a simpler form.

At the end of the esophagus lies a muscular sac called stomach. It performs the function of storing food. Enzymes secreted by the gastric glands present in the walls of the stomach facilitate the breakdown of food. Stomach acid and other digestive fluid or enzymes facilitate the breakdown of food. Thereafter, chyme (semi liquid mass of partially digested food) moves along the digestive tract through the process of peristalsis. Peristalsis involves muscular contractions of the smooth muscle tissue in the walls of organs of the digestive system. Between the stomach and the small intestine lies an opening called pylorus. The movement of food from the stomach into the small intestine is regulated by pyloric sphincter valve.

The absorption of nutrients takes place in the small intestine, which is integral to the process of digestion. It is supported or held in place by a fold of membranous tissue called mesentery. This tissue prevents the movement of the small intestine in the abdominal cavity. The partially digested food moves into the small intestine, which is divided into duodenum and ileum. Duodenum almost runs parallel to the stomach, whereas the coiled section of the small intestine is referred to as the ileum. In the small intestine, bile and pancreatic juice aid in the process of digestion. Bile is a digestive fluid that is produced by the liver. The largest organ present in the body cavity, the liver comprises three lobes. Gallbladder is a small sac that is located under the liver. It acts as a reservoir for bile. Bile helps in the digestion of fat, whereas proteins and carbohydrates are broken down into simpler molecules by the enzymes (trypsin, lipase, amylase, chymotrypsin, etc.) produced and secreted by the pancreas. Bile and pancreatic juice flows through the common bile duct into the small intestine. After the absorption of nutrients, the undigested food moves into the large intestine.

Just like humans, the large intestine in frogs also stores the undigested food. It performs the function of absorbing water from the food residue. The solid waste moves towards the cloaca. Water or liquid waste moves to the urinary bladder. Solid as well as liquid waste is expelled out of the body through the cloacal opening.

If you take a look at the illustration of the human digestive system, you can see that the organ systems of humans and frogs are very similar. The way the organs of a frog are laid out in the body is quite similar to that of humans. The functions of some of the anatomical parts or the organs of the digestive system of frogs are similar to that of the digestive organs of humans. However, humans use their teeth for chewing and biting, whereas frogs swallow their prey. Moreover, humans don’t use their eyes while swallowing. It must also be noted that frogs don’t drink water like humans do. They primarily absorb water through their skin.