Examples of Homologous Structures That Reveal Our Shared Ancestry

Homology is defined as the similarity between organic structures in different animals that arises as a result of their evolution from a common ancestor. The similarity is in regards to the form that the structure takes as well as the function it performs. Such structures are called homologous structures, and they are explained with the help of examples in this BiologyWise post. 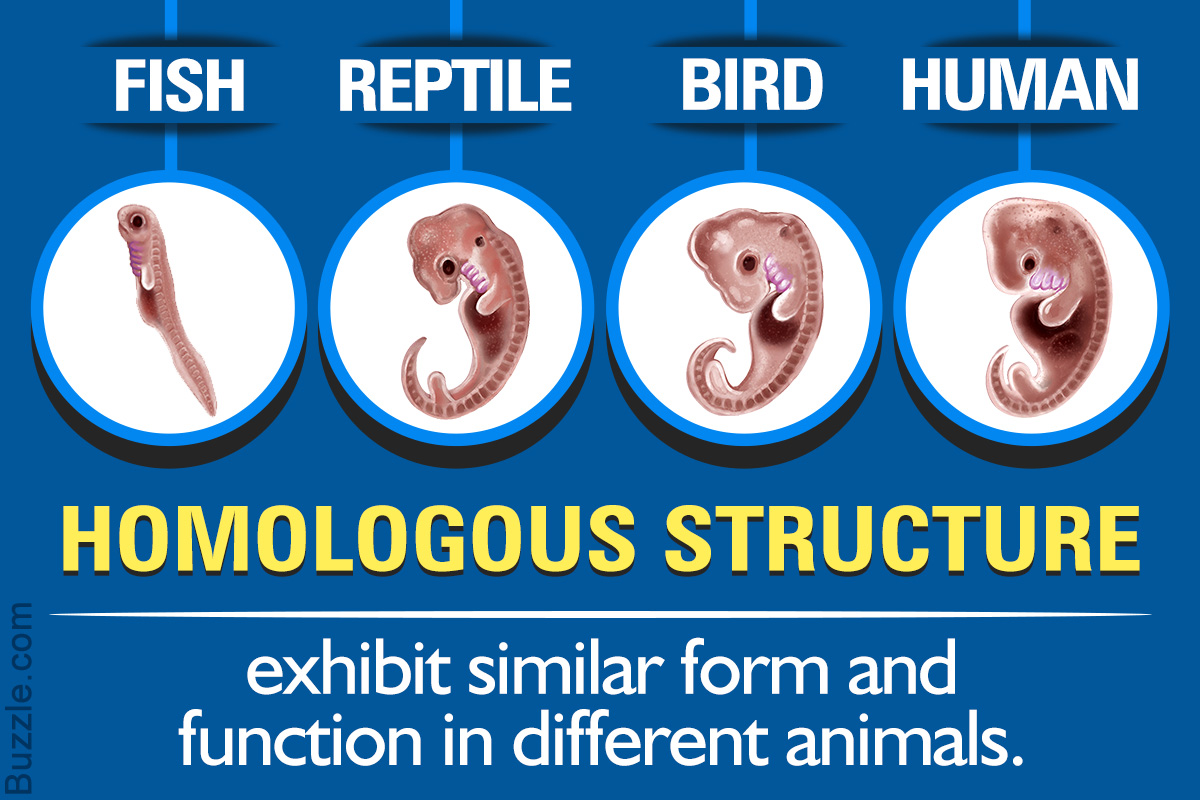 Homology is defined as the similarity between organic structures in different animals that arises as a result of their evolution from a common ancestor. The similarity is in regards to the form that the structure takes as well as the function it performs. Such structures are called homologous structures, and they are explained with the help of examples in this BiologyWise post.

The term homology  was coined in the year 1656. It is derived from the Greek words homos, meaning ‘same’ and logos, meaning ‘relation’. This term was further improved upon by Ray Lankester, a British zoologist, who provided two more terms describing the type of homology observed. ‘Homogeny’ implies homology due to the inheritance of a feature from a common ancestor, and ‘homoplasty’ implies to the occurrence of homology due to any and all other factors. Homoplasty is also referred to as analogy.

Homologous structures do not merely point towards physical features of organisms, but also refer to the conserved genetic sequences, and the dichotomy observed between different organs arising from the same type of embryonic tissue. Based on these, homology across organisms can be categorized and into three types.

It describes anatomical and skeletal similarities with respect to shape, placement, and/or function between organisms belonging to the same taxonomic category. The common structure arises due to the evolution of the different species from a common ancestor. However, the function or use of that structure may or may not be the same in all the organisms. This disparity is due to the phenomenon of natural adaptation of organisms to their surroundings. Hence, evolution can be considered as a remodeling process, that is driven by the force of natural selection in order to allow the most adapted species to develop and proliferate.

However, this concept should not be confused with that of analogous structures, which are structures that serve the same function in various organisms, however, are not derived from a common ancestor. An example for such a case would be that of the wings of a butterfly, a bat, and a bird. While all three appendages share the same function, the varied bone placement and the differing characteristic features of each bone imply that they are not variations of a common primitive morphological feature.

A common example of morphological homology is evident in the skeletal structure of the front limbs of vertebrates like humans, cats, whales, bats, porpoises, horses, frogs, etc. As shown in the figure above, the basic skeletal structure is similar enough, and consists of the same type of bones and joints so as to be evident of being derived from a common ancestor. The differences in the length and position of the different bones in the forelimb are a result of evolutionary adaptation. For example, in case of man the front limb takes the shape of upper and lower arm and hand, in case of a bat it has transformed into a wing, and in case of a porpoise it forms a flipper/fin. Hence the bone structures in these animals can be called homologous structures.

The structure of the bones forming the chest cavity in humans and apes is yet another example of a skeletal homologous structure. The chest cavity in both species is broader than it is deep, and has flat shoulder blades at the back. These features imply that both humans and apes have descended from the same ancestor who could suspend itself with the use of its upper limbs. In comparison, other quadrupeds like monkeys, have deep and narrow chests with the shoulder blades present at the sides.

With respect to plants, an example for morphological homology would be the leaves of a pitcher plant, Venus flytrap, poinsettia, and a cactus. While none of these leaves look very similar in appearance, or have the same functions, they are nevertheless homologous and derived from a common ancestor. In the pitcher plant, the leaves are modified into a pitcher-like shape (hence the name) that catches and traps insects inside it. The Venus flytrap exhibits modified leaves in the form of rudimentary jaws that catch insects. The leaves of the poinsettia resemble the vividly colored petals of a flower and hence function to attract insects and pollinators. Lastly, the cactus’ leaves are specially modified into spines in order to reduce the amount of water lost via transpiration. This helps it to retain water and grow in dry conditions.

Stages of Embryonic Development in Animals

Ontogeny refers to the origin and development of an organism throughout its lifetime. It is also called morphogenesis. The fields of ontogeny, embryology, and developmental biology are closely linked and they describe the way an organism develops from a fertilized egg. The study of these fields across various species, allows one to observe and understand the gradual steps of evolution, thereby helping to establish and decipher the inheritance of various ancestral features. It has given rise to a new field of study, called evolutionary developmental biology.

In the 19th century, a German embryologist called Karl Ernst von Baer put forth a theory that was later called Baer’s laws of embryology, which are as follows.

These laws can be explained in the following manner. Each organism develops as a result of a fertilized egg cell. However, despite this point of similarity, the early stages of cleavage and gastrulation that are followed by the zygote are distinctly dissimilar across all species, and this variation arises due to and also depends on the evolved body plan of the parental organism. But, as the embryos form and start developing, they show various similarities at the later stages of embryogenesis.

In other words, organismic development is distinct and varied during the initial stages of embryogenesis, in later stages they attain a significant amount of similarity, only to diverge again to eventually form adults of their respective species. Such a converging and diverging pattern of embryonic similarity is called the developmental hourglass. Many embryologists suggest that the process of embryonic development is a sort of a recap of that particular organisms evolutionary history.

While ontogenetic homology does not apply to a wide range of organisms since post-gastrulation the blastopore follows separate destinies, i.e. it either forms the mouth (protostomes) or the anus (deuterostomes). Insects are protostomes, while vertebrates are deuterostomes. Hence any sort of morphogenetic homology is observed only between closely related species of organisms. In such a case, the organisms display a similar general body plan and structure (ancestral model) up to a certain point, after which each species diverges and develops the unique features and characteristics that define it.

It refers to the homologous structures and elements present at the molecular level of an organism. From the evolutionary standpoint, molecular homology is the most substantial and irrefutable evidence for common ancestry. This is so, because all living organisms on this planet are fundamentally similar at the cellular and molecular level. There are similarities in each cell of all living organisms as well as the molecules occurring within those cells.

At the cellular level, each animal and plant cell has the same cellular contents and structures, with very few deviations. All cells possess a membrane that encapsulates it. They all possess heritable information in the form of nucleic acids – DNA and RNA. They possess similar proteins, carbohydrates, lipids, salts, etc, and follow the same metabolic pathways. In a comparison between an animal and plant cell (the most divergent organisms), there exist a difference of only three structures – the cell wall, centriole, and chloroplast. Such a great similarity between such vastly different organisms is proof of an initial common ancestor.

At the molecular level, each organism follows the same central dogma of gene expression, where genetic material is translated into proteins via the process of gene expression. The rudimentary machinery for gene expression and protein formations is also more or less similar. The very fact that the genome of every organism codes for itself, displays homology between all lifeforms. Also, a number of genetic sequences are found to be conserved (housekeeping genes) across various different species irrespective of their complexity.

Genetic homology across different species of organisms can be observed in the sequences coding for conserved genes and proteins. For example, the Flu regulatory protein is present in both Arabidopsis (multicellular higher plant) and Chlamydomonas (single cell green algae). The version of the protein present in the algal cell is much more complex than the one found in Arabidopsis and possesses additional genetic domains that allow it to undergo alternative splicing for increased variability of the gene product. However, if the algal version is introduced into the plant genome via genetic engineering techniques, the protein produced would still be functional. Hence, this proves that the protein in both organisms shares a genetic ancestor.

Another example of molecular homology is the amino acid sequence coding for the hemoglobin molecule, across various different species. The comparison of the sequences yields very minor differences between that possessed by the species of lamprey, frog, chicken, mouse, rhesus monkey, and humans.

Pair of chromosomes possessing alleles of the same genes, and having the same overall shape, size, and structure are called homologous chromosomes.

The potato (tuber), ginger (rhizome), and the fleshy part of cacti are homologs as they are all modified stems.

Carrots and sweet potatoes exhibit homology as they are modified roots.

The vestigial tail bone in humans is homologous to the prehensile tails of monkeys.

Snakes possess a vestigial pelvis that is homologous to that possessed by humans, cats, and dogs.

The cells of all organisms possess lipid bi-layer plasma membrane.

The auditory bone present in the ear of mammals is homologous to the bone that makes up the jawbone of certain species of fish.

The observance of homology between various species at different hierarchical levels of development, evolution, and complexity demonstrate and prove that all life originated from a single organism, also known as LUCA (last universal common ancestor), and this serves as the basis behind the present research methodologies revolving around gene manipulation, genetic engineering, and gene therapy.