Binary fission, the most common type of asexual reproduction, is observed vastly in simple organisms, such as bacteria, archaea, and protists (particularly some protozoans). In addition, specific organelles of eukaryotes divide by this method. Binary fission steps, which remain the same for every organism, are discussed here. 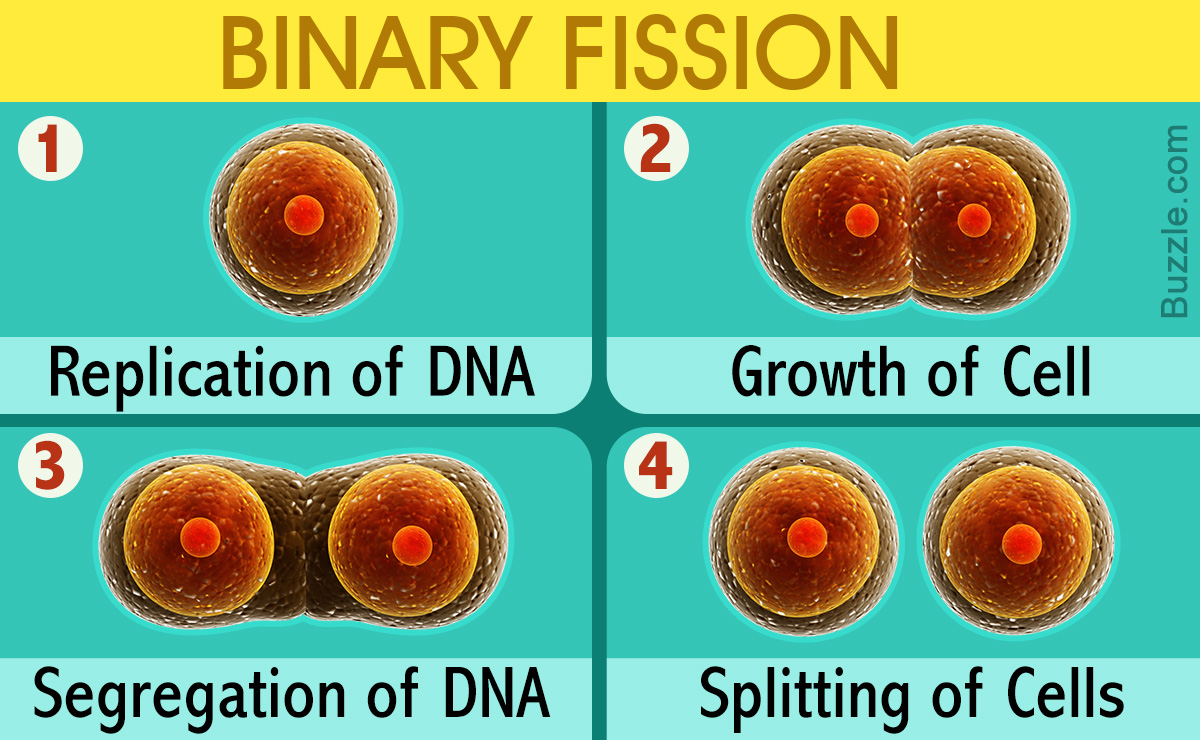 Binary fission, the most common type of asexual reproduction, is observed vastly in simple organisms, such as bacteria, archaea, and protists (particularly some protozoans). In addition, specific organelles of eukaryotes divide by this method. Binary fission steps, which remain the same for every organism, are discussed here.

Binary fission is a simple mode of asexual reproduction exhibited by prokaryotes and unicellular organisms. It results in the formation of two identical daughter cells, each a replica of the parent cell. Though mitosis and meiosis may seem similar to binary fission, they are all very different types of cell division. The former two are observed in higher and more developed organisms. Such processes have distinctive steps involving nucleus and centromeres, which are absent in prokaryotic cells.

Researchers use E. coli as a model organism for studying the steps of binary fission in detail. It is to be borne in mind that chromosome in prokaryotes comprises only a single circular DNA.

Like other cellular processes, binary fission occurs when organisms are thriving in favorable environmental conditions. The step-by-step process of binary fission is enlisted below:

Replication of deoxyribonucleic acid (DNA) marks the initiation of the binary fission process. The process of replicating nucleic acid begins from a replication origin. Following this, a replication bubble is formed, which separates the DNA strands. Each of the strands then serve as a template for synthesis of the complementary strand. Then, the DNA or genetic material is duplicated.

The second step in binary fission is growth of the parental cell. After duplication of DNA, the parent cell is ready to reproduce by binary fission process. As a preparatory step, it grows considerably and increases its size. At the same time, the two circular DNA strands migrate and attach themselves to plasma membrane in different sites.

Following sufficient growth, the cell elongates and starts pulling apart from opposite poles. A division septum is created transversely in the cell. In short, the cell membrane extends and pinches inwards. During this process, separation of the two chromosomes takes place. This step is controlled by a group of proteins that assemble near the division site.

Inward growth of the cell membrane is associated with development of a new cell wall. The final binary fission step is splitting of the parental cell into two daughter cells, each having a nuclear material (chromosome) of its own. Problems may occur in any of the steps in binary fission, resulting in abnormalities in the daughter cells.

Some simple organisms, like Chlamydiae and Paramecia reproduce by both sexual and asexual means, depending upon the prevailing conditions. Thus, they have an advantage over simpler unicellular organisms in terms of generating more daughter cells and increasing their population.

After binary fission is over, the outcome is two genetically identical daughter cells. Under favorable environmental conditions, each of these cells grow and develop into matured cells. Speaking about binary fission examples, you can go through organisms that reproduce asexually. Though there are several methods of asexual reproduction, like budding, fragmentation, etc., binary fission is a common type in majority of the unicellular organisms.