The Undeniable Importance of Housekeeping Genes

Housekeeping genes are those that are always expressed in all cells of an organism, and are important for the maintenance of basic or 'housekeeping' functions of the cell. BiologyWise provides a brief account of the same. 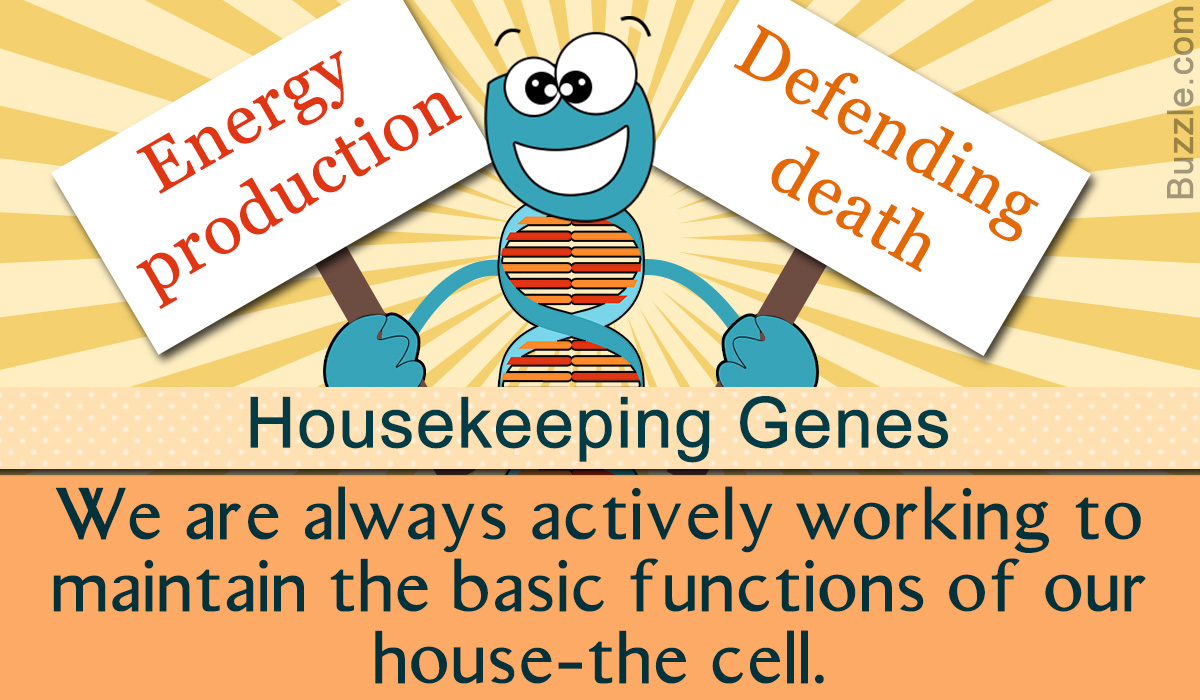 Housekeeping genes are those that are always expressed in all cells of an organism, and are important for the maintenance of basic or ‘housekeeping’ functions of the cell. BiologyWise provides a brief account of the same.

Gene, the fundamental unit of heredity, is a short genomic segment which comprises a region that gets transcribed as well as a set of regulatory regions. Genes contain the information for synthesizing the RNA and protein molecules required for all cellular activities.

It is through regulation of the gene expression that an organism is able to produce particular molecules in a timely and tissue-specific manner. This aids in optimizing the resources, controlling the timely occurrence of the different cellular processes, and adapting to changes in the internal and external environment of the cell.

Intricate regulatory processes act as molecular switches which turn certain genes on and off in response to molecular cues which inform the cell about the time, age, favorable and unfavorable conditions, danger, etc. The genes that are always ‘on’ are termed constitutive genes, whereas those that are switched ‘on’ only when required are termed as facultative genes.

Of these, certain constitutive genes are observed to be transcribed continuously at a constant level so as to perform the basic cellular functions in each and every cell of the organism. These are termed as the ‘housekeeping genes’. The expression of these genes is said to remain constant even under changing, but normal, cellular conditions.

Every cell―be it a stem cell, a cell differentiated to perform a specific role, or a cell that forms the structural part of a tissue―requires a certain set of molecules to perform the basic processes needed to survive and keep functioning. The housekeeping genes are responsible for maintaining this set of molecules in the cell.

True to their name, these genes are responsible for the various housekeeping functions of a cell. These include maintenance of structural integrity, cell cycle control, metabolic processes, prevention of cell death, garbage disposal, as well as molecules required for the expression of other genes.

They code for the following:

ø Molecules required for the breakdown, recycling, as well as de novo synthesis of nucleotides

ø RNA (rRNA) and protein molecules required to form the ribosome, which is responsible for protein synthesis by reading the information encoded by the mRNA molecules

ø DNA-dependent RNA polymerases that are capable of synthesizing RNA by using DNA as the template (These are responsible for the synthesis of messenger RNA (mRNA), ribosomal RNA (rRNA) and transfer RNA (tRNA) from their respective genes.)

Interaction of a Ribosome With mRNA

ø An array of enzymes and other molecules necessary for the metabolism of carbohydrates, proteins, and lipid molecules as well as those required for the synthesis and utilization of ATP

ø A list of proteins required for maintaining the spatial organization of DNA, as well as detecting and repairing DNA damage

ø Structural proteins necessary to maintain the cellular cytoskeleton, as well as organelle synthesis and recycling

ø Transporter molecules that are required to transport ions and molecules in and out of the cell, as well as within different parts of the cell

ø Signaling molecules that interact with the receptors, and pass the molecular signal to the appropriate organelle or protein. These include growth factors, as well as the chemical messengers that play a vital role in autophagy, prevention of apoptosis, regulating the cell cycle, and several cellular pathways

Owing to their uniform expression, housekeeping genes are used as a control or as an internal reference in RT-PCR, in situ hybridization, genetic analyses using DNA microarrays, as well as other RNA and gene expression analyses. A single or combination of genes may be used for this purpose.

Given below is a list of housekeeping genes (and their gene product) that are commonly used during several genetic analyses of human cells and tissues.

ACTB (Beta-actin)
It is a type of cytoskeletal actin that is essential for maintaining the structural integrity of the cell as well as for its motility.

B2M (β2-microglobulin)
It is a component of the MHC-I (Major Histocompatibility Complex class I) molecules present on the surface of all nucleated cells.

CLTC (Clathrin heavy chain)
The coat protein, clathrin forms a coating on several intracellular vesicles, which are responsible for transporting molecules within the cell and to other adjoining cells.

GUSB (β-glucuronidase)
It is type of glycosidase that cleaves off β-D-glucuronic acid residues from the non-reducing end of mucopolysaccharides.

LDHA (Lactate dehydrogenase A)
A member of anaerobic glycolysis pathway, this enzyme is responsible for the conversion of L-lactate and NAD+ to pyruvate and NADH.

POLR1B (DNA-directed RNA polymerase I, subunit RPA2)
RNA polymerase I is the enzyme that specifically transcribes the genes coding for ribosomal RNA.

RPL19 (60S ribosomal protein L19)
It is one of the several proteins associated with the 60S subunit of the ribosomes.

TBP (TATA-box binding protein)
This DNA-binding protein serves as a general transcription factor and specifically binds to DNA sequence known as the TATA box, which is present in the regulatory region of several genes.

TUBB (β-tubulin)
It is a structural component of microtubules that is involved in the movement of vesicles, organelles, as well as spindle formation during cell division.