A Brief Summary of Lamarck’s Theory of Evolution

Lamarck's Theory of Evolution, also known as Lamarckism, provides a historical context to the currently prevalent concept of genetic inheritance. Jean-Baptiste Lamarck was the first to postulate a coherent evolutionary theory about the drivers/ forces of evolution. Despite the theory being rejected, he is still regarded as a pioneer in the subject of evolutionary change. This post explains the various aspects of Lamarck's Theory of Evolution.

Home / Uncategorized / A Brief Summary of Lamarck’s Theory of Evolution 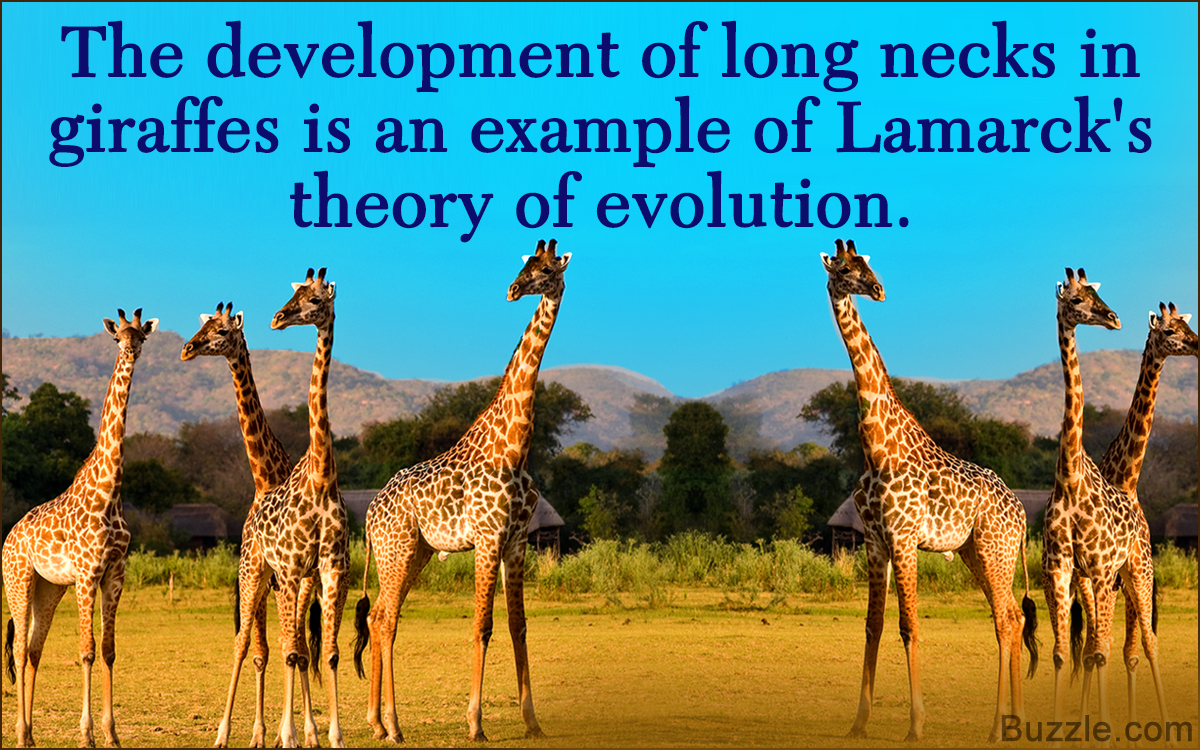 Lamarck’s Theory of Evolution, also known as Lamarckism, provides a historical context to the currently prevalent concept of genetic inheritance. Jean-Baptiste Lamarck was the first to postulate a coherent evolutionary theory about the drivers/ forces of evolution. Despite the theory being rejected, he is still regarded as a pioneer in the subject of evolutionary change. This post explains the various aspects of Lamarck’s Theory of Evolution.

Over 116 plant species and 103 marine species have been named after the French naturalist, Jean-Baptiste Lamarck.

The process and phenomenon of organic evolution is slow and gradual. Hence, the causes underlying this phenomenon along with its contributing factors cannot simply be discerned by conducting experiments. Any experiment that hopes to capture the gargantuan scope of evolution, cannot be carried out or completed within the short life span of a man. Hence theories are formulated to explain this process, based on observed facts, historical records, and theoretical concepts.

One such theory that attempted to explain the mechanism of evolution was put forth by Jean-Baptiste Lamarck. He developed one of the very first truly coherent theoretical frameworks to describe organic evolution. He has been regarded as the ‘primary evolutionary theorist’. His theory puts forth the idea of soft inheritance, a concept that claims that organisms possess the ability to pass on the qualities acquired in their lifetime, to their future progeny i.e. Evolution occurs as a result of the inheritance of acquired characters from parents to the progeny, over the course of time.

▣ The idea of evolution and that all biological beings originate from a common ancestor, can be traced back to the concept of scala naturae given by Aristotle. It is a hierarchical classification that classifies objects and beings based on their complexity. This idea was commonly accepted and prevalent during the 18th century.

▣ In the early 1790’s, Erasmus Darwin proposed that all warm-blooded animals could be traced back to a single ancestor, a living filament that could acquire new parts and functions in response to specific stimuli, and that these acquisitions could be passed on to successive generations. Later, in 1809, Jean-Baptiste Lamarck published a paper on his theory of evolution. It showcased a comparative study of current biological species with fossils. He observed that the fossils bore a close resemblance to the current species, and this led him to propose the use and disuse theory – the thought that any body part used vigorously, caused it to become stronger and if left unused, would start degenerating. This idea was accompanied by the belief in the inheritance of acquired characters, i.e, adaptations occurred during an organism’s lifetime could be passed on to the next generation. He proposed that the application of this mechanism with regards to evolution could help explain the diversity of life and the adaptability of living organisms to their changing environments.

▣ However, due to the emergence of Charles Darwin’s theories of evolution and pangenesis, Lamarck’s theory was widely rejected by the 20th century due to lack of supporting evidence. In 1920, a few researchers conducted experiments which yielded results in support of Lamarckian inheritance, but these experiments were later found to be filled with record keeping errors and specimen tampering, and hence Lamarckism was refuted once again. Also the findings presented by Mendel with regards to his genetic experiments on pea plants, corroborated Darwin’s theories and not Lamarck’s.

▣ The 1930s saw a revival of Lamarckism in the form of Lysenkoism in the Soviet Union. It was a concept proposed by Trofim Lysenko. This concept affirmed and embraced the inheritance of acquired character against the prevalent concept of genetic inheritance. This theory suited Joseph Stalin’s opposition towards the concept of genetics, and hence was popularized and implemented in agricultural research. But the recurring failure of this theory, caused it to lose credibility and be disregarded.

▣ Recently, with the rapid advancement of science and our deeper understanding of inheritance, researchers have started re-examining this concept. With the recent discovery of epigenetics and transgenerational epigentics, it is being believed that Lamarckism may well be a valid evolutionary concept.

This theory hinges on two main ideas that are wrought by the following of two laws. The ideas are as follows.

Inheritance of acquired traits: The traits that are acquired by an individual during its lifetime are inherited by its subsequent progeny.

He explained these processes with the help of examples of giraffes and of blacksmiths. In the case of giraffes, he proposed that the continuous stretching of the neck by the giraffe in the efforts of reaching the leaves present higher on trees, caused the muscles in the neck to strengthen and gradually lengthen over a period of time, to give rise to longer necks in giraffes. Similarly in the case of blacksmiths, he noted the higher muscular development in the arms of blacksmiths due to the nature of their work, and proposed that any children that the blacksmith has, would inherit higher muscular development in their arms as well. He claimed that two driving forces caused these phenomena to occur. These forces were as follows.

Le pouvoir de la vie (a complexifying force): The frequent and continuous use of an organ causes the movement of vital fluids that etch out the organs from the tissues and help in the creation of complex structures from simple structures.

L’influence des circonstances (an adaptive force): The changing environment would lead to the use or disuse of certain characters by the organism, leading it to develop suitable adaptations. This would in turn increase the complexity of the organism’s structure, causing it to be specialized to thrive in that particular environment.

▣ Both Lamarck and Darwin developed their theories based on the same evidence of vestigial structures, fossil examination, and artificial selection through breeding, but postulated very different theories. While Lamarck’s theories proposed theories like use and disuse, inheritance of acquired characters, increase in complexity, and no extinction; Darwin’s theories proposed species variation, inheritance, differential survival, and extinction. He refuted the claim that complexity arises due to usage of particular characters or their disuse. He believed that complexity arose as a result of organisms adapting to their environments over the course of several generations. While he was still unclear of how traits were inherited, he did not completely agree or disagree with Lamarck’s concept of inheritance of acquired characters. Later, due to the efforts of Mendel and his genetic experiments on pea plants, genetic inheritance of traits was established.

▣ Another discrepancy between the two theories was the order in which variation and inheritance occurred. Lamarck’s theory involved the creation of variations as a result of adaptions, which would then be inherited by future generations, whereas Darwin’s theory required the occurrence of inherited variations before they could be selected for in response to the change in environment. This discrepancy was also resolved with the help of Mendel’s findings, which gave rise to the laws of genetic inheritance. These laws firmly supported Darwin’s claim that variations in species were a result of selection between inherited traits, that were transmitted from one generation to another in predictable frequencies.

Lamarckism was briefly revived by Giard and Cope in the late 19th century as a new form of the original theory while incorporating a few of the views of the opponents of Lamarckism. This new form was called neo-lamarckism and it stressed on the concept of inheritance of acquired characters. It posited the following tenets.

However, this form of Lamarckism was soon refuted and rejected due to the discovery of mutations and their role in inheritance of traits. However, it has found a few applications in the field of sociocultural evolution.

▣ In light of the genetic findings of Mendel, researchers carried out experiments that helped disprove Lamarck’s theory of evolution. One such researcher was Ernst Haeckel. He carried out an experiment where he cut off the tails of mice for several subsequent generations. After a given number of generations had passed, he allowed the offspring of the tailless mice to develop and grow their tails. When these tails were compared to those of the original ancestors, he observed no change in any aspect of the tail, hence disproving the Lamarckian concept. Other such examples include the birth of puppies with fully functional tails, from parents who had their tails clipped.

▣ In the course of current research in epigenetics, in some cases it has been observed that inheritance of epigenetic modifications are Lamarckian in nature, i.e. the epigenetic changes are responsive to environmental stimuli, and have the ability to affect gene expression of phenotypic features. Such an alteration is inheritable and can persist over many generations. These changes include the methylation and demethylation of DNA, chromatin structure, etc.

▣ A number of experiments have been carried out to test this claim. Some researchers propose Lamarckism while others oppose it. Few examples of the experiments include comparative study and analysis of progeny produced from parents who have been subjected to stressful conditions. The parents include sets of animals as well as plant. Examples of these experiments are –

A 2009 study that studied the effect of stress on the foraging behavior of chickens.

A 2010 study that showed the inheritance of obesity as functional result of the father’s increased food intake.

A 2011 study showing a roundworm’s developed resistance towards viruses is inherited by its progeny.

▣ Despite these experimental findings, most researchers still refuse to believe that these inheritances are Lamarckian in nature. Instead, they contest this theory by pointing out the extreme complexity of mammalian systems. So complex in fact, that it is yet to be elucidated completely. They argue that this complex web of molecular interactions (e.g. undetected mutations, microbiota alterations, etc,) could hold the real reason that explains the above experimental findings. Researchers Thomas Dickens and Qazi Rahman (2012) go so far as to point out that all permutational combinations of epigenetic changes are inherently coded for by the genetic code of the organism and hence are under the control of genetic inheritance by natural selection. Thereby following inheritance in accordance with Darwinism.

While this theory has largely been refuted with respect to biological evolution, it has had an impact on all subsequent thought processes in evolutionary biology till date. Also, it has found applications in the evolution of social context, that involves the evolution of cultures and traditions in society.