Ribosomes are small organelles of a cell having a dense feature and helps in protein fabrication. They are nucleoproteins having their origination in the nucleolus. Let us know more about them. 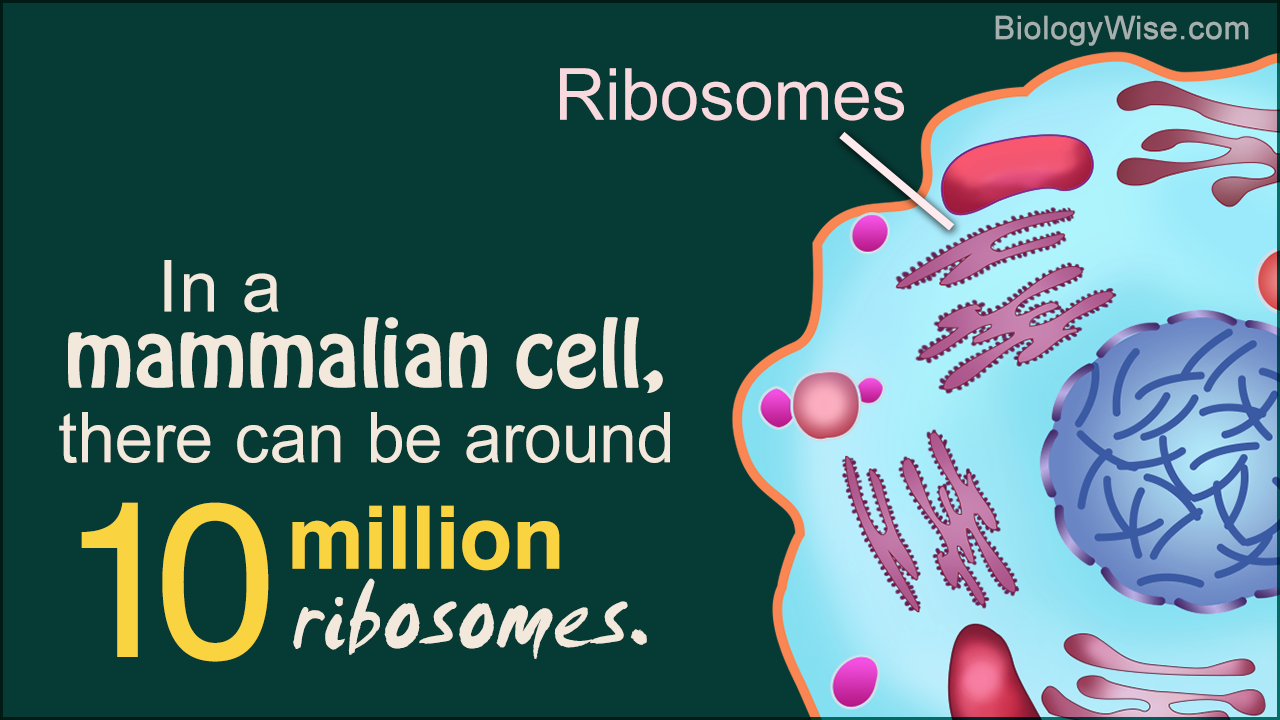 Ribosomes are small organelles of a cell having a dense feature and helps in protein fabrication. They are nucleoproteins having their origination in the nucleolus. Let us know more about them.

The main components of ribosomes are proteins and RNA. Fabrication of protein is their primary task. Its presence is generally noticed in ER (Endoplasmic Reticulum). However, cytoplasm has ribosomes scattered throughout its area. They, as a cell organelle, are the most significant element of any cell whether plant or animal.

The honor of discovering a Ribosome belongs to George Palade, a cell biologist from Romania, with the aid of an “Electron Microscope”. His theory that stated ribosomes are granules or dense elements earned him a Nobel Prize. In 1958, Richard B. Roberts gave the organelles its name ‘Ribosome’. From 1970s only, its molecular structure was known. However, in 2000, a more perfect structure has been discovered with the help of a microscope of higher resolution.

It is present in all Eukaryotes and Prokaryotes and is the most significant constituent as it fabricates the protein that is required in different energy required processes of a cell. According to occurrence, ribosomes can be divided into two categories:

They travel independently in cytoplasm. Proteins fabricated by this type are utilized for biological processes inside the cell.

Membrane-bound categories are formed by ribosome-synthesized protein. Newly-fabricated chains of polypeptides are introduced into ER through ribosomes. After that, these chains are send to the chosen destination. Proteins fabricated through these are utilized in cells or eliminated through exocytosis.

Whether Membrane-bound or Free, ribosomes have similar functions and structure. They are differentiated through presence or absence of Signal Sequence that targets ER in the fabricated polypeptide chains. 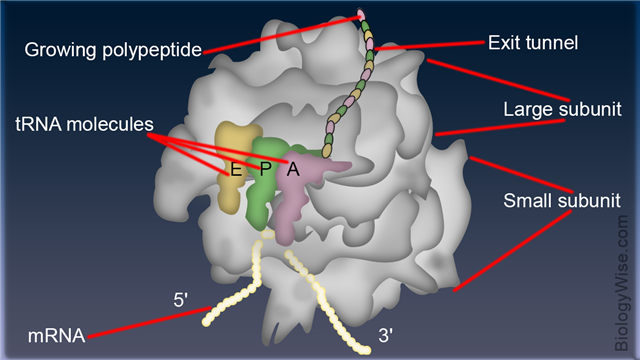 Diameter of Ribosome is 20nm. Their composition can be divided into two parts – 2/3 part of r-RNA (ribosomal RNA) and 1/3 part RNP (Ribosomal protein or Ribonuclep protein). Polypeptide chain is fabricated by translating mRNA (messenger RNA) with the aid amino acids that tRNA (transfer RNA) delivers. Since they have their active part composed of sub-structures of RNA, they are also termed Ribozymes.

Structure of ribosome and its sub units are almost similar for both Eukaryotes and Prokaryotes.

Ribosomes perceived in mitochondria and chloroplasts of a Eukaryote comprises larger and smaller subunits that are bounded together along with several protein molecules in a single 70S particle. 70S particles are considered as bacteria descendants and show similarity with prokaryotic ribosomes.

Ribosomes come in variety of sizes. However, the structure that they share are similar. RNA that are extra in the larger variety and are present in several longer and continuous distribution. This distribution in loops formed from them does not disrupt or transform the balance inside the organelle. RNA performs all activities of ribosome that are catalyst based and the protein that resides over the surface stabilizes the organelle.

Dissimilarities in Eukaryotic and Prokaryotic ribosomes are useful for pharmaceutical chemist. They produce antibiotics using the dissimilarity that helps in eliminating infections of bacterial nature without having any harmful effect on the neighboring cells. 70S category (bacterial descendants) are susceptible from these antibiotics. Mitochondria have ribosomes that are similar in nature to 70S and bacteria. However, their double impermeable membrane bounded structure do not permit antibiotics to affect the organelle.

Protein synthesis originates in ribosomes. The RNA contents of ribosome are transformed into protein molecules. Cells that require numerous protein for its proper functioning, require comparatively more of these cell organelles.

The significance of protein synthesis can be easily observed in cells by the presence of numerous Ribosomes traveling independently in the cell. In Eukaryotes, synthesis of three r-RNA takes place within nucleolus while the fourth synthesizes exterior to nucleolus and is then transferred to nucleolus for assembling them. Proteins move into the nucleolus and a combination of 4 r-RNA and this protein takes place that helps in formation of larger and smaller subunits that are two structures of ribosomes. Prior to protein fabrication, the subunits combine exterior to nucleus. Synthesis occurs in cytoplasm for Prokaryotes. In the absence of ribosomes, messages cannot be read and fabrication of protein is not possible.