Finding the Origin of Life: The Primordial Soup Theory Explained

Evolutionary biology has helped explain the transformation of unicellular organisms to intelligent multicellular organisms. However, the exact cause underlying the origin of life still remains ambiguous. This has led to the development of several theories, attempting to explain how life began on primordial Earth, of which the primordial soup theory is one of the most prominent theories. This BiologyWise post explains this theory in detail. 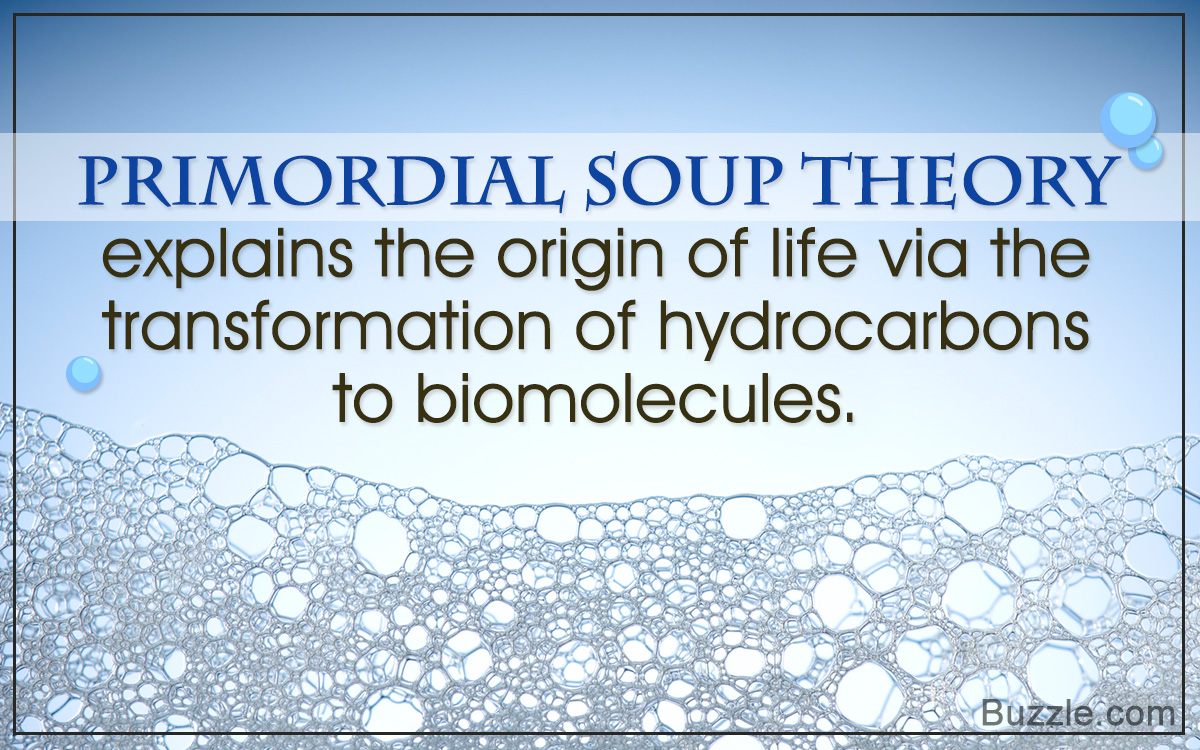 Evolutionary biology has helped explain the transformation of unicellular organisms to intelligent multicellular organisms. However, the exact cause underlying the origin of life still remains ambiguous. This has led to the development of several theories, attempting to explain how life began on primordial Earth, of which the primordial soup theory is one of the most prominent theories. This BiologyWise post explains this theory in detail.

The origin of life appears at the moment, to be almost a miracle, so many are the conditions which would have had to have been satisfied to get it going.
– Francis Crick

From the time of Aristotle till the 17th century, life was believed to have originated spontaneously, and was thought to be continuously generated due to the occurrence of chance events. The process by which this phenomenon occurred was termed as abiogenesis, and it referred to the formation of living organisms from non-living matter.

However, due to the experimental efforts undertaken by Francesco Redi, Lazzaro Spallanzani, and Louis Pasteur, the concept of abiogenesis was disproved and replaced with the concept of biogenesis. This concept explained that new life arises from pre-existing life by way of reproduction. While this theory explained the continued occurrence of life forms, it still could not provide any information regarding the origin of life itself.

In 1924, Alexander Ivanovich Oparin, proposed that abiogenesis did occur in a warm water body like a pond or an ocean on primordial Earth. He explained that the conditions present then, could have spontaneously given rise to simple and crude life forms. The lack of experimental proof could be explained by the fact that not only had the Earth’s environment changed radically since then, but also that any new life forms would immediately be consumed by present-day organisms inhabiting that area. He hypothesized that the current level of atmospheric oxygen prevents the synthesis of organic compounds essential to the generation of life, and that a “primeval soup” of organic bio-molecules could be generated by the action of sunlight in an atmosphere devoid of oxygen. These bio-molecules would then combine with themselves and grow till a critical mass was attained, after which, it would divide via fission into daughter molecules. This mechanism would form the basis for a primitive form of metabolism.

At around the same time, a British biologist, J. B. S. Haldane, introduced his concept of the chemical origin of life. He likened the primitive ocean to a vast chemical laboratory, one that possessed a mix of inorganic compounds. Under the action of sunlight, the atmosphere of carbon dioxide, ammonia, and water vapor would allow the transformation of inorganic molecules to organic molecules (primitive life forms). These molecules would then interact with each other to produce complex compounds, which would, in turn, form cellular components. Eventually, a membrane structure would be formed, and this would then evolve to encapsulate self-replicating molecules, thereby, producing the first living cell. This hypothesis for the origin of life was termed as biopoiesis by J.D. Bernal.

Since the theories posited by Oparin and Haldane were developed independently but simultaneously, and reached the same conclusions, the primordial soup theory is also called the Oparin-Haldane hypothesis. It consists of the following tenets:-

♦ There is no fundamental difference between a living organism and lifeless matter, and the complex combination of manifestations and properties, so the characteristics of life must have arisen in the process of evolution of matter.

♦ The infant Earth had possessed a strongly reducing atmosphere containing methane, ammonia, hydrogen, and water vapor which were raw materials for the evolution of life.

♦ As the molecules grew and increased in complexity, new properties came into being, and a new colloidal-chemical order was imposed on the simpler organic chemical relations determined by the spatial arrangement and mutual relationship of the molecules.

♦ Even in this early process, competition, speed of growth, struggle for existence, and natural selection determined the form of material organization which has become characteristic of living things.

♦ Living organisms are open systems, so must receive energy and materials from outside themselves, and are not therefore limited by the Second Law of Thermodynamics (which is applicable only to closed systems in which energy is not replenished).

These tenets were later revised and summarized by Robert Shapiro and presented in its mature form as given below:-

In 1953, Stanley L. Miller and Harold C. Urey conducted an experiment to test the Oparin-Haldane hypothesis. They tried to replicate the atmospheric conditions of primordial Earth by enclosing methane, ammonia, hydrogen, and water in their gaseous state in a closed system. Continuous electric currents were used to simulate the occurrence of lightning storms in this closed system. The resultant products were analyzed via the help of chromatography techniques. After seven days, the analysis of the products revealed that almost 10 – 15% of the carbon from methane had been converted to an organic form. Also, 2% of this carbon was in the form of a few essential amino acids. These findings helped prove that life may have originated according to the primordial soup theory. This experiment is known as the Miller-Urey experiment, and has formed the basic principle behind many other such experiments.

In 1961, the Catalonian biochemist, Joan Oró, discovered that the reaction between hydrogen cyanide and ammonia not only produced amino acids but also a tremendous amount of adenine, the nucleotide base. Adenine is vital for the functioning of any living cell, as it forms one of the four bases in RNA and DNA molecules, and also as it is a component of ATP, an energy releasing molecule. These findings inspired further experiments that were successful in producing other RNA and DNA bases from a similar prebiotic reaction mixture in a reducing atmosphere. These discoveries helped provide experimental support for the primordial soup theory.

► Geo-chemical evidence suggests that primordial environment was non-reducing and contained hydrogen, water, and carbon dioxide. In such a case, the only possible amino acid that can be formed is glycine, and this happens only when the hydrogen content is extremely high. Hence, the necessary building blocks of life could not possibly be generated in this environment.

► Prebiotic chemicals would in theory be synthesized in minute quantities, which would degrade quickly due to the high temperature and action of UV light. Hence, they would not accumulate and aggregate to give rise to complex compounds.

► The presence of an ozone layer would indicate presence of oxygen molecules, thereby, rendering the atmosphere non-reducing. However, if the ozone layer is absent, the UV light would destroy any biomolecules. This produces a catch-22 situation.

► If, by chance, the molecules were produced, the resultant soup would be very dilute, and not concentrated enough, for the molecules to interact.

► From a chemical viewpoint, all chemical reactions produce racemic mixtures, i.e. there is an equal amount of left-handed and right-handed chiral products. However, all bio-molecules selectively utilize only the left-handed chiral molecules. In a primeval state, this selectiveness is not accounted for.

► In a polymerizing reaction, monomers fuse together to produce a polymer and a water molecule. According to Le Chatelier’s principle of chemical equilibrium, the presence of products (water) would shift the equilibrium, thus, causing the reaction to slow down and eventually stop. This implies that polymerization of the bio-molecules to form a complex compound would either produce negligible amounts of the polymer or not take place at all. For the reaction to occur, it needs to be accompanied by a dehydration step. This goes against the main tenet of the theory that claims life originated in a warm water body.

► In the event that the above limitations could be overcome and accounted for, the theory still does not explain how proteins formed by the aggregation of amino acids could give rise to any form of a self-replicating genetic molecule.

In conclusion, primordial soup theory does not fully explain the process involved in the origin of life. To overcome the many limitations presented by this theory, other theories have been put forth to account for the spontaneous generation of life, but none have produced convincing evidence, so as to be widely accepted as a valid explanation. An example of one such theory is the deep-sea vent theory that posits life began in submarine hydro-thermal vents. This theory has gained momentum following the 2011 experiment by Tadashi Sugawara, that succeeded in producing a “protocell” in hot water.