While there are several parasitic flatworms, tapeworms and flukes are the two most commonly studied types. These flatworms are capable of causing diseases in different host organisms, such as fish, dogs, domesticated animals, and humans.

While there are several parasitic flatworms, tapeworms and flukes are the two most commonly studied types. These flatworms are capable of causing diseases in different host organisms, such as fish, dogs, domesticated animals, and humans.

Flatworms are invertebrates, characterized by their minute-size or flattened, unsegmented, bilateral, soft body. Their body shape and size are adaptations, owing to lack of complex circulatory and respiratory systems. To be more precise, the microscopic size and flattened shape of flatworms enable them to undergo diffusion for exchanging oxygen and carbon dioxide. While not all flatworms are parasitic in their food habit, some of them exhibit parasitism and feed on host organisms for deriving nutrients.

The flatworms are categorized under the phylum Platyhelminthes (also spelled as Plathelminthes), which is also their common name. When we say parasitic types, they belong to the groups Cestoda (representing tapeworms), Digenea (representing flukes), and Monogenea (infest fish). Actually half of the identified flatworms are parasitic, while the remaining are free-living species. They are either ectoparasites or endoparasites. The former live in the external parts of a host organism, while the latter are found in the internal organs of the host.

Several types of flatworms are parasitic to humans, fish, livestock, and other organisms. But, the two most widely studied parasitic species are tapeworms and blood flukes. According to the host organism, they are further classified into different types. Highlighted below are some of the commonly known parasitic platyhelminthes, which cause diseases in humans, fish, and livestock.

A classic example of parasitic flatworm in humans is tapeworm (scientific name, Taenia species). Categorized under the taxonomic class Cestoda, tapeworms are also known as cestodes and the disease caused by these parasites is called cestodiasis. Believe it or not, tapeworms isolated from the human intestines reach to more than 50 feet in length. They feed on partially digested food of the host organism for the purpose of laying eggs. The eggs then enter intermediate hosts, like fish, pigs, and cows.

Hyper tapeworm is scientifically known as Echinococcus granulosus. The adult infests the small intestine of dogs and causes canine hydatid disease. Intermediate hosts of this parasitic platyhelminth are humans, sheep, deer, and other animals. It is small in size, ranging from 2 mm to about 7 mm in length. Upon severe infestation, it may cause death of the primary host organism. Spreading to intermediate host takes place via ingestion of foods and drinks that are contaminated with dog feces.

Broad fish tapeworm or simply fish tapeworm (scientific name: Diphyllobothrium sp.) causes an intestinal disease in humans, called diphyllobothriasis. The disease occurrence is most common in Japan and other countries, in which raw or undercooked fish is consumed on a large scale. It is one of the largest flatworms that infests humans as a definitive host. Intermediate host organisms of this parasite are copepod and fish.

Blood flukes cause schistosomiasis in humans, and the disease occurrence rate is highest in the developing countries. This parasitic platyhelminth is scientifically known as Schistosoma species, and measures about 1 cm in length. As the name goes, the adult infests blood vessels of the internal organs, particularly that of the intestines and lays eggs. The intermediate host of blood flukes is aquatic snail.

The simplest of all parasitic flatworm types is classified under Monogenea. They do not need an intermediate host, unlike other parasitic platyhelminthes. Majority of the species are ectoparasites, and are present on the fish gills and skin. A few of them are endoparasites, isolated from the rectal area and urinary bladder of some vertebrates. They are small-sized, measuring about 2 cm in length, which cling to the host organisms through specialized attachment parts.

Whether you are referring to parasitic or non-parasitic platyhelminthes, the life cycle remains the same. There are three successive stages, starting with eggs, followed by larvae and adults. The adult female lays eggs after deriving nutrition from the primary host. Based on the species type, the eggs make their way to intermediate host body and hatch to larvae. These larvae attack the primary host directly (in case of tapeworm), or they become adults before infesting the primary host (in case of blood flukes).

Well, this was a brief overview about parasitic platyhelminthes. Both parasitic and non-parasitic flatworms are restricted to areas, where they get sufficient moisture and nutrition. Otherwise, the soft body of platyhelminthes is prone to desiccation. Very often, they are collected from the host organisms, moist terrestrial habitat (leaf litter, within soil), sea, and freshwater bodies. 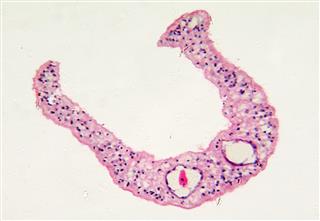 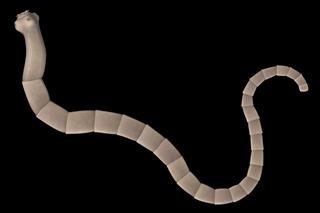