These Amazing Marine Biology Facts Will Make You Go Wow

Marine biology is the study of various organisms living in the oceans. Let's dive deep into the world of these oceans, and have a look at some interesting facts about marine biology. 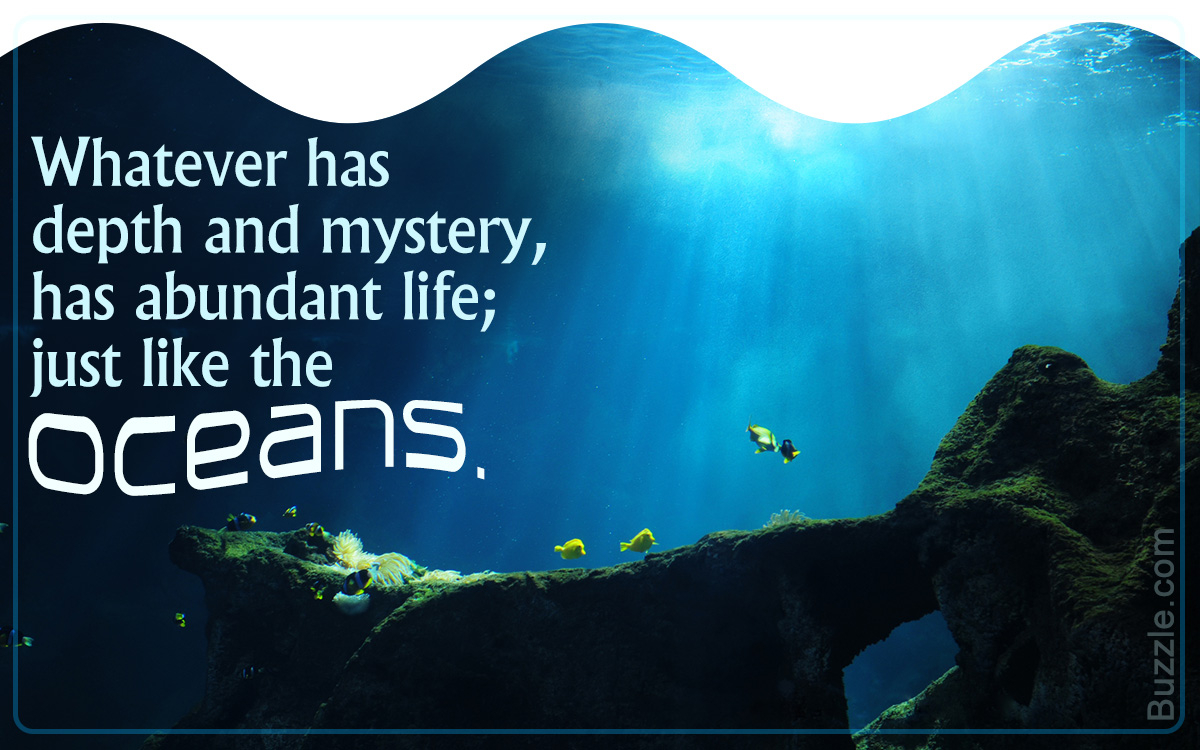 Marine biology is the study of various organisms living in the oceans. Let’s dive deep into the world of these oceans, and have a look at some interesting facts about marine biology.

Can You Carry 50 Jumbo Planes?

Well, that is the pressure that you will feel if you go down to the deepest point in the ocean, around 11,320 tons/square mile.

Although the oceans cover 71% of the surface of our planet, much remains to be explored and discovered in the ocean world. In fact, less than 10% of the marine world has been explored till date.

Marine biology studies a large number of species, from the microscopic zooplankton and phytoplankton, to huge organisms like whales and sharks. Marine biology studies all that lives, survives, and exists, under the surface of the ocean, including fish, marine animals, plants, microscopic organisms, etc. To some extent, it also includes the study of the inter-relationship between marine life, marine ecology, and the environment. 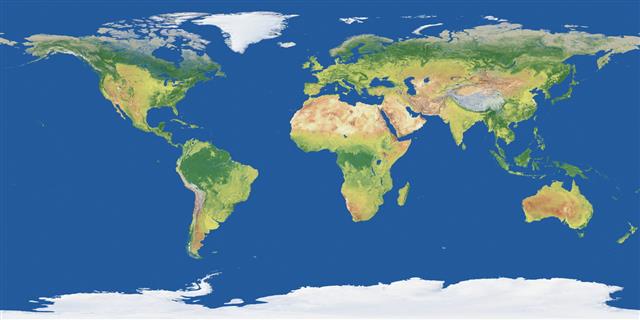 The oceans contain more than 97% of the total water on the Earth, and account for nearly 99% of the Earth’s living space, owing to their area as well as depth.

Life originated in the oceans about 3.1 billion to 3.4 billion years ago. Compared to the aquatic life forms, the terrestrial organisms are quite new, appearing only about 400 million years ago.

The average depth of all the oceans is around 3,795 meters. The lowest point on Earth is the ‘Challenger Deep’, and is located at a depth of 10,898 to 10,916 meters in the Mariana Trench, in the western part of the Pacific Ocean.

The shores of the Dead Sea are the lowest land point on Earth, located at 420 meters below sea level. The Pacific Ocean is the largest as well as the deepest ocean on the planet.

Marine habitats include coasts, near-shore regions called continental shelves, open oceans, and deep seas. Most marine life exists around the coastal regions. The salinity of the marine waters range from nearly-fresh to fully-saline.

Latest statistics reveal that around 230,000 unique marine species have been discovered and classified by scientists. However, with scientists believing that there are a lot many marine species yet to be discovered or found, that number is likely to increase by multiple proportions.

Marine life is very beneficial to mankind, providing food, medicines, transportation, tourism, as well as recreational benefits. In the United States, more than 180 million people visit the oceans on a yearly basis. But with more than 50% of human population living within 50 miles of a coast, the oceans are facing a great threat in terms of depleting resources and pollution-related hazards.

The chemical composition of corals has been found to be very close to that of the human bones. Due to this reason, the corals are often used in bone transplants in humans.

The oceans absorb more than 50% of carbon emissions that result from human activities. This has resulted in a 30% increase in the acidity of sea water, posing a great threat to the survival of marine lifeforms.

Life in the Marine World

Seahorses, are in fact, a type of fish, and owe their name to their horse-like appearance. Seahorses are exceptionally slow swimmers, and they need to eat constantly due to the absence of a stomach. They are the only living species wherein the males give birth to baby seahorses.

Crabs, also called decapods, are protected by a thick shell made of calcium carbonate, and have a pair of claws for catching their prey. They walk sideways and hunt by hiding in dark holes. A type of crab, the Horseshoe Crab, is very valuable to humans, providing the cure for toxins that cause septic shocks. This crab has not undergone any evolutionary change in the last 135 million years. They are often called ‘living fossils’, as the fossils of their ancestors date back to 200 million years, which is even before the time of the dinosaurs.

The Blue Whale is the largest known animal on earth, reaching a size of more than 100 feet in length, and weighing more than 150 tons. The heart of a Blue Whale is as big as a small-sized car, and one of its blood vessels is large enough to enable a man to crawl through it!

Sea sponges are actually animals, rather than corals or plants, as generally thought to be. They are one of the oldest surviving organisms on Earth, and can reach a lifespan of more than 200 years. Sea sponges let water pass through them, and absorb oxygen and foodstuff from the passing water. They are popularly termed as the ‘vacuum cleaners’ of the sea.

Corals consist of a group of many small organisms called polyps, which have a hard skeleton made of limestone, that give the coral reefs their diverse and colorful structure. Coral reefs are one of the oldest marine habitats, and act as ecosystems to more than 25% of the marine organisms. However, they are facing a great danger due to increasing global warming and pollution.

Starfish or sea stars are called so due to their obvious resemblance to a star, and they are not fish, but echinoderms. There are over 1,800 different species of starfish. They usually have 5 arms, but some species like the Sun Star, can also have as many as 40 arms. They have a great capacity to regenerate, and can grow their whole body from just a single arm. They do not have any blood in their body, and digest their food outside their bodies.

Sharks do not have a single bone in their body. Their skeleton is made up of tough cartilage. Sharks are very successful predators with a great sense of smell. Whale Sharks can grow up to 40 feet, and are the biggest extant fish in the world. There are more than 350 known shark species, out of which only 36 are considered potentially dangerous to humans. However, the chances of a shark attack on humans is extremely rare.

The octopus owes its name to its four pairs of arms. They are venomous creatures that inject their venom using hard bird-like beaks. Most octopus species eject a trail of dark ink to confuse and frighten a predator away. They are very good at disguising themselves and blending into the surroundings. They move with the help of suckers located at the end of their arms that help them to stick to any object. They lack a skeletal system, and are able to squeeze themselves into extremely narrow places.

Dolphins are very intelligent mammals, and are part of the species of whales. Due to their agility and ability to learn, they have formed a special bonding with humans. Dolphins are famous for their leaps out of the water while swimming. The Bottlenose Dolphin is the most common and popular of all the 36 known dolphin species. They communicate with each other using sounds like clicks and whistles.

Jellyfish are a primitive species made up of gelatinous or jelly-like substance, with no bones or a skeleton. They do not have a brain or a nervous system. A jellyfish eats as well as throws out its waste material through its mouth. It has stinging cells attached to the end of its tentacles, known as nematocysts, which it uses to inject venom and immobilize its prey.

Believe It or Not!

Of the billions and billions of fish eggs that are laid in the oceans, an average of one in a million eggs make it to maturity!

The well-known and common Goldfish is the only living being that has an ability to see both ultraviolet and infrared light.

A Blue Whale’s tongue is large enough to accommodate around 50 people standing on it.

Electric Eels are the only species with an ability to generate an electric charge. They can generate electric shocks of up to 600 volts, to defend themselves from predators or to stun their prey. 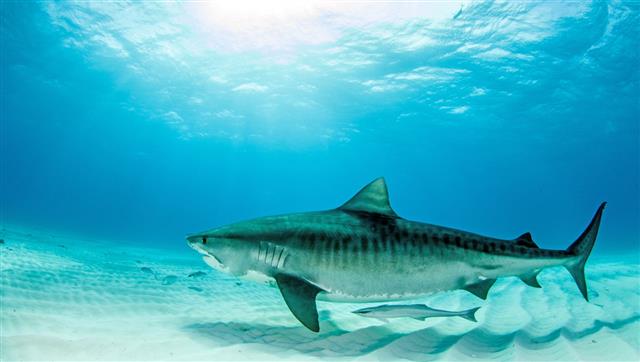 Sharks have the ability to grow back all their teeth throughout their lifespans. A Tiger Shark can, on an average, produce around 24,000 teeth in its lifetime.

Dolphins communicate with each other by making sounds and calling for help when in trouble. The other dolphins rush to help and push the dolphin towards the surface, so that it can breathe.

Green Turtles can migrate to as far as 1,400 miles for the purpose of nesting. They can survive without breathing for as long as five hours, and their heartbeat can be as slow as one heartbeat per nine minutes.

A species of jellyfish known as the Box Jellyfish, has one of the most toxic venom around, which attacks the nervous system and the heart. It is known to have caused injuries and even death to humans.

Many fish like the Blue-streaked Wrasse and the Clownfish, can change their sex during the course of their lives.