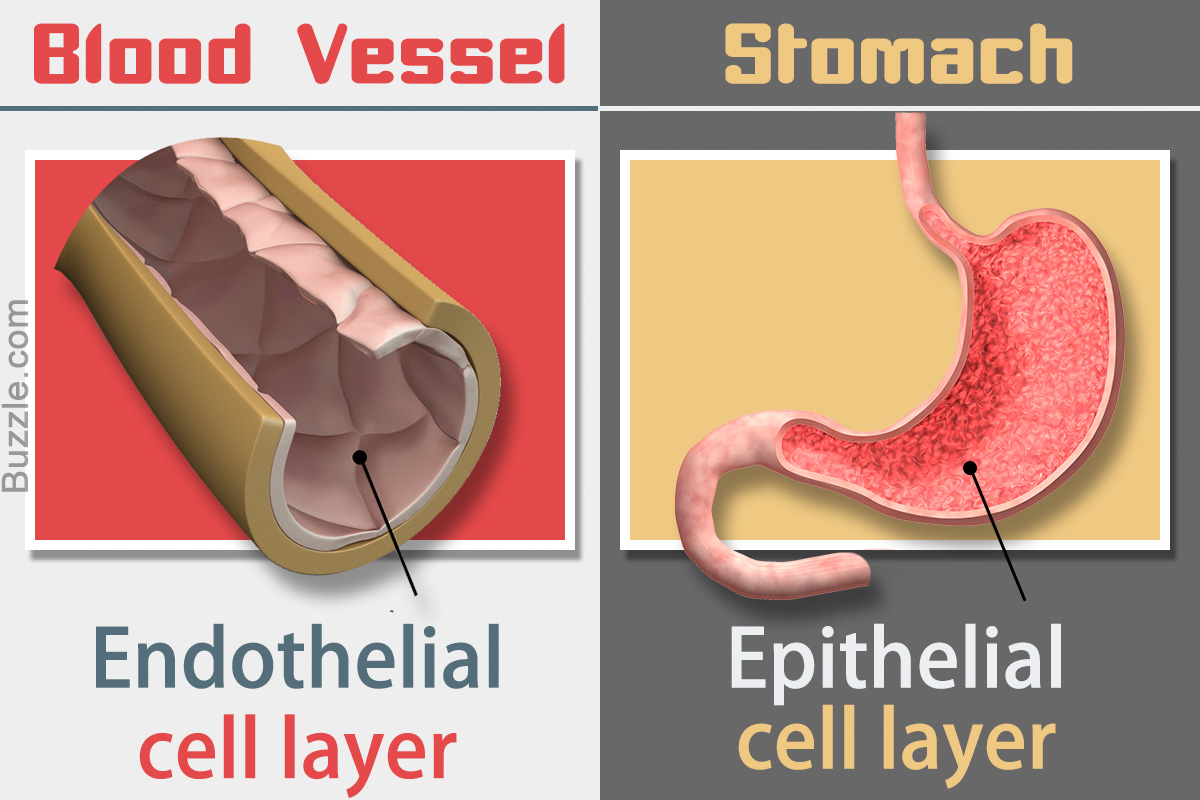 Urinalysis showing a large number of epithelial cells in the urine may indicate a urinary tract infection.

Endothelial and epithelial cells that make up the tissues in humans and animals are of epithelial origin, but there is a major difference between the location, structure, and function of these cells. However, both the cells that form the tissue act like an interface between the underlying layer and the outside environment. Endothelial cells lie ‘inside’ the body as they are located in the blood vessels. On the other hand, epithelial cells are often described as lying ‘outside’ the body as they also coat the outer layer (epidermis) of the skin. The following BiologyWise article discusses the various aspects of these cells.

✦ Endothelial cells form the endothelium, a thin layer that coats the inner surface of blood vessels. Simply said, the cells always lie attached to the vessel wall. So, the inner wall of the entire circulatory system is covered with endothelial cells. These cells act as an interface between the circulating blood and the vessel wall. The endothelium is one-cell-layer thick and also lies attached to the interior of the heart chambers.

✦ The endothelial cells that lie attached to the vascular wall play a key role in controlling blood flow. The cells secrete nitric oxide (NO), which allows dilation of blood vessels to increase blood circulation. This also helps in controlling blood pressure. Endothelial cells also produce different kinds of proteins to keep blood clots at bay. However, it also releases clotting proteins to stop bleeding. Endothelial cells found in the glomeruli (capillaries located in the kidneys) also help in filtering blood.

✦ The endothelial cells that make up the endothelium are a single layer of cells. This single sheet of endothelium is so thin that molecules of water and oxygen can easily penetrate the layer and access the surrounding tissue. Also, the endothelial cells lack a tightly packed epithelial morphology. They are spaced by intercellular clefts that allow passage of fluids and diffusion of substances.

✦ The epithelial cells that form the epithelium provide multiple layers of protection from the outside environment. Epithelial cells form a closely packed structure similar to bricks stacked one above the other in a wall, with very little extracellular space between them.

✦ Another major difference lies in their surfaces. The endothelial cells that make up the endothelium has a non-thrombogenic smooth and soft surface, meaning blood does not clot during normal circulation.

✦ The epithelium is composed of different types of epithelial cells, so the surface layer is seen having irregular papillary projections.

Disclaimer: The information provided in this article is solely for educating the reader. It is not intended to be a substitute for the advice of a medical expert.