Cytosol is basically the liquid or an aqueous part of cytoplasm, where the other parts of the cytoplasm such as various organelles and particles remain suspended. Read on to find out more information about these cell components in order to understand the difference between the two.

Cytosol is basically the liquid or an aqueous part of cytoplasm, where the other parts of the cytoplasm such as various organelles and particles remain suspended. Read on to find out more information about these cell components in order to understand the difference between the two. 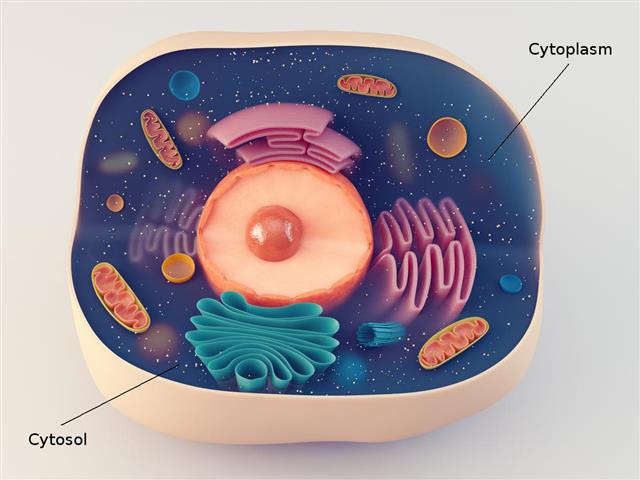 The cell is the basic functional unit of life for all living organisms. Cytoplasm and cytosol are the components of a cell. Basically, cells can be classified into two types: eukaryotic and prokaryotic cells. An eukaryotic cell is the one that contains a membrane-bound nucleus, while the prokaryotic cell lacks such a nucleus, as well as some other complex structures or organelles found in an eukaryotic cell. A cell is usually bounded by a cell membrane, which is sometimes called the plasma membrane. Cytoplasm and cytosol are those parts of a cell that can be found inside or within the cell membrane.

The cytoplasm consists of all the contents that we can find within the cell membrane, excluding the cell nucleus. The cell nucleus and its contents are, thus, not considered as a part of cytoplasm. Instead, they are called ‘nucleoplasm’, which is separated from the cytoplasm by a nuclear membrane. In addition to this, it contains other organelles like mitochondria, Golgi apparatus, endoplasmic reticulum, and lysosome. These organelles are also filled with liquid, which is separated from the cytoplasm by biological membranes.

Along with these organelles, the cytoplasm contains various inclusions, which are basically granules of starch and glycogen, mineral crystals, and lipid droplets. The gel-like translucent fluid that is found inside a cell is also a part of the cytoplasm. This intracellular fluid is what we know as cytosol. Cytosol is that part of cytoplasm that is not enclosed within the organelles found in it.

Cytosol is the fluid where the other elements of cytoplasm remain suspended. On the other hand, the cytoplasm includes all components that can be found inside the cell membrane. Cytoplasm contains cytosol, along with the organelles and the cytoplasmic inclusions, which are the other significant elements in its structure. It is made up of water, nucleic acid, enzymes, non-organic ions, salts, amino acids, lipids, carbohydrates, and other dissolved nutrients.

As the liquid part of cytoplasm, cytosol makes up about 70% of the cell volume. The main components of cytosol are,concentration gradient, cytoskeletal sieve, protein complexes, and protein compartments. Cytosol is a complex mixture of water, salts, dissolved ions, and organic molecules. Water makes up a larger portion of cytosol. Apart from water, protein filaments can also be found in cytosol, which form the cytoskeleton filaments. Cytoskeleton filaments give the shape to a cell and assist in its movement. In a prokaryotic cell, the genome or genetic material of the cell can also be found in the cytosol.

Cytosol is basically an important part or element of the cytoplasm. In a prokaryotic cell, it is the site of almost all metabolic processes or chemical reactions that take place within a cell. This is the case for eukaryotic cells as well. As a part of cytoplasm, cytosol helps to transport metabolites from the site of production to the site of utilization. Cytosol is also the site for cell communication, while cytoplasm is the site for a large number of cellular activities such as, cell division and metabolic pathways like, glycolysis.

Thus, in a nutshell, while cytosol is the intracellular fluid contained in cells, cytoplasm is the entire content within the cell membrane.