Of the several confusions that persist in the field of evolutionary biology, one is that about convergent and divergent evolution. What exactly is the difference between the two? 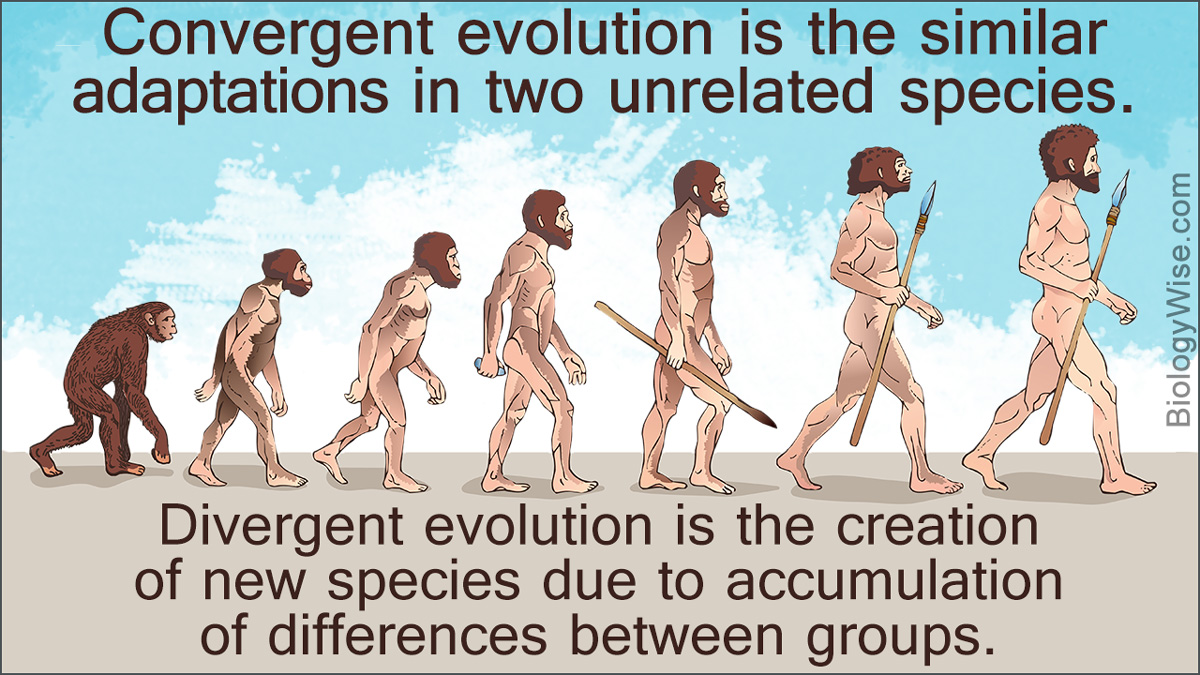 Of the several confusions that persist in the field of evolutionary biology, one is that about convergent and divergent evolution. What exactly is the difference between the two?

I do not believe any concept in science has ever given rise to as many controversies and controversial debates as evolution has. But even with so many controversies, “Nothing in biology makes sense except in the light of evolution” (Theodosius Dobzhansky). When we think of evolution, the first name to strike even someone who is not from a biological sciences background would be Charles Darwin. Not a word can be written on evolution without mentioning the name of this pioneering evolutionary biologist. His work On the Origin of Species has been the topic of much discussion ever since it was first published.

Imagine evolution of life to be a process like the flowing of a river. As it leaves the mountain, it will take its due course and meander about. If a boulder were to obstruct its flow into a crevice, it would take a turn around the crevice. If however a big enough boulder were to stand in between its path, the river would split into two and give rise to two new smaller rivers, each of which would meet its separate fates as it flowed down the mountain.

One thing to be borne in mind however, is the fact that the ‘boulder’ has to be ‘big enough‘. Competition between just two monkeys for one apple on a tree is not enough to create a new species. But if there are two big groups of monkeys, all competing for the apples of a single tree, and if there is also a banana tree nearby, then one of the groups may discover bananas and evolve into a new species of banana-eating monkeys. (This is just a hypothetical example – do not take it literally! Take home the essence!)

Convergent evolution has nothing to do with divergent evolution. It is a totally different concept. First get this into your head, or you are going to remain in an illusion even by the end of the article! I will explain the concept using the same analogy of the flowing river. Now consider there are two different rivers instead of one. Suppose both encounter a big enough boulder, and both the boulders are similar enough. Consequentially they would both split into two smaller independent rivers.

One point of consideration here is the fact if the two rivers are on the same mountain or two different mountains – i.e. how related or unrelated are the two species we are talking about. Birds belong to ‘aves’, while bats are in fact ‘mammals’. Yet they have both adapted to fly. Here the two organisms are not related at all. On the other hand, penguins and ostriches are both flightless birds, both of which have evolved to walk on the ground. But in spite of both being birds, they have evolved very differently with respect to other features. However, both can be regarded as instances of convergent evolution.

The main point to be borne in mind here is that the ‘boulder’ has to be ‘similar enough‘. Using the same example of monkeys, apples and bananas – if you want bears competing for apples to also evolve into banana-eating bears, they should be posed with the same amount of competition as the monkeys; only then will two different species (monkeys and bears) evolve towards the same fate (going bananas!).

Difference between Convergent and Divergent Evolution

Divergence makes sense only in the light of ‘gradualism‘. The essence of evolution is that it is slow, gradual. If evolution were to take place in leaps and bounds, there could arise a situation where divergence would in fact lead to convergence! How? Let me explain. Suppose a macro-mutation took place in a species to suddenly give rise to a new species – divergence has occurred. However, this divergence is so drastic, that the two species now have very little in common. This means that they are no more under ‘similar’ selective pressures. Now we have two new species, each of which will evolve on their own, and under quite different selective pressures. Now is it not possible that by mere chance the two species will independently arrive at the same fate?

Confusing? Let’s use the above example. Say the group of monkeys competing for apples ‘macro-mutated’. So now we have one orange-eating species, and one apple eating species. Now, can it not happen that the orange eating species eventually diverged into banana-eating species, just the way the apple-eating species did? If this were to happen, one of the two species would in fact be driven to extinction. Then what was the whole point of nature investing so much energy in creating a new species in the first place? Hence for ‘speciation’ (creation of a new species) to sustain, it is essential that evolution be gradual. Gradualism is what ensures that two new species will diverge and not converge.

A lot of concepts of evolution that were formulated in the subsequent years were in fact the offshoots of the concepts Darwin elaborated in his book. If not directly related to, they have been deduced from concepts in the book, sometimes only as a word play (like convergent and divergent evolution). If you haven’t yet read the book, I would highly recommend you grab yourself a copy of On the Origin of Species. It is amazing to see how much a man can do with only a pair of eyes and a keen, observant and thoughtful mind. With the possibility of sounding redundant, I will still say – such was the genius of Darwin, that “Nothing in biology makes sense except in the light of evolution“.