Green algae are mostly unicellular or simple filaments, and are found in freshwater, tropical marine, and terrestrial habitats. Let us learn more about these organisms.

Green algae are mostly unicellular or simple filaments, and are found in freshwater, tropical marine, and terrestrial habitats. Let us learn more about these organisms. 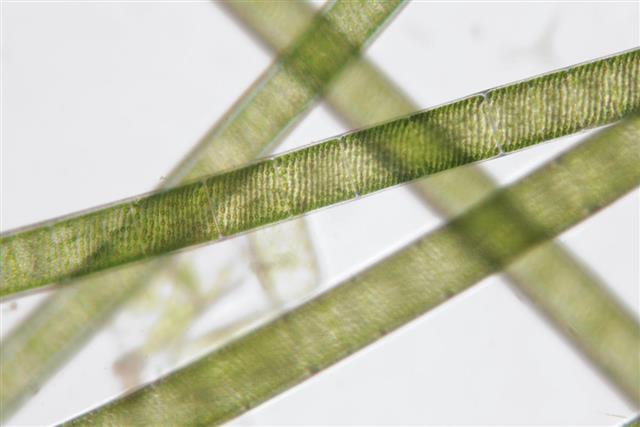 Chlorophyta are a division of green algae, which are either free-floating or anchored on the shore rocks, or are present in large aggregations on stagnant water, such as ponds and lakes. This division has 450 genera and 7,000 species under it, and its diversity is comparatively larger than other types of algae. Although called the green algae, chlorophyta are found in diverse colors like yellow, purple, red, orange, and even black. Carotenoids are the color pigments, which provide the specific colors to the species of this division. They reproduce by the process of oogamy or isogamy.

Chlorophyta are similar to terrestrial plants in many ways. They contain chlorophyll ‘a’, chlorophyll ‘b’, carotene ‘a’, carotene ‘b’, and xanthophylls, which help in photosynthesis. The cell wall contains cellulose and pectins. Few species like Halimeda also contain calcium carbonate in their cell walls.

Chlorophyta consist of more number of freshwater than marine species. The former ones are smaller in size. Few species, commonly known as ‘snow algae’, can grow in snow and glaciers. They have high concentration of carotenoid deposits in their cells, which provide them with a red hue. They are found in the Rocky Mountains, the Cascades, the Arctic, and the Antarctica.

Chlorophyta are autotrophic organisms. A few species have formed a symbiotic relationship with lichens, hydras, and mollusks. They are eukaryotes with all normal cell contents like nucleus, golgi bodies, vacuoles, pyrenoid, starch, chloroplasts, flagella, and cell wall.

Some species of this division form cell plates during mitosis. They also have the typical double boundary membrane like plants. The common shape of chloroplasts are in the form of cups, filaments, star, reticulated, and bands. A few also have a discoid shape that is similar to terrestrial plants. For example, Spirogyra has spiral chloroplasts. Band-shaped ones are found in Ulothrix, and Zynema contains star-shaped chloroplasts. Cup-shaped ones are found in Chamydomonas. Cladosphora has many oval chloroplasts and Mougeotia contains flat ones.

Many species of Chlorophyta contain pyrenoids, which are used in the starch synthesis and deposition. Starch is the major storage product of Chlorophyta, and is stored in the stroma of chloroplasts. They have a wide range of morphological diversity. There are of the following types: unicellular (Golenkinia), filamentous (Microthamnion), siphonous, multicellular, colonial (Volvox), parenchymatous (Coleochaete), motile, and non-motile. They have various sizes, which can range from a few microns to meters. The largest known Chlorophyta is Ventricaria ventricosa. This species has a single cell that can be several centimeters in diameter.

Chlorophyta are an important source of food to marine animals like planktons. As they carry out photosynthesis, they play a significant role in contributing to the world’s oxygen supply. The pigment beta carotene is used as a food coloring agent. It is also thought to contain anti-cancer properties. In January 2009, it was found out that algae can play an important role in reducing global warming. It was explained that as sea ice melts, iron gets introduced to the oceans. This helps in the growth of algae, which in turn absorb the carbon dioxide.

On the other hand, Chlorophyta tends to impart an unpleasant taste and odor in drinking water. They also clog the filtration equipment. If the algal population increases in the water source, they form scums, which can decrease the oxygen supply for other marine organisms.