Detailed Information on the Characteristics of Monocots

Monocotyledons, also called monocots, are a class of flowering plants that have only one seed leaf in the embryo contained in the seed. BiologyWise provides information on the characteristics of monocot plants.

Home / Uncategorized / Detailed Information on the Characteristics of Monocots

Monocotyledons, also called monocots, are a class of flowering plants that have only one seed leaf in the embryo contained in the seed. BiologyWise provides information on the characteristics of monocot plants.

The classification of flowering plants into dicotyledons and monocotyledons was first mentioned in 1682 by John Ray in his work, Methodus Plantarum Nova. About one-fourth of the flowering plant species are placed in the category of monocotyledonous plants. These are a source of important food items such as barley, wheat, rice, and corn.

The plant kingdom is broadly divided into flowering plants (angiosperms) and non-flowering plants (gymnosperms). The term ‘monocotyledon’ is derived from the botanical name Monocotyledones. It can be split into two words: mono and cotyledon. While mono means one, cotyledon refers to the embryonic leaf present in the seed. In case of angiosperms, the flower is the reproductive structure that forms fruit to protect the seeds. The seed comprises the embryo, as well as the food supply. Basically, the term ‘monocotyledon’ refers to one of the two groups of flowering plants. One of the major characteristics of monocots that differentiates them from dicotyledons, is the number of cotyledons (tiny embryonic leaves within the seed of a plant). Cotyledons are the first leaves to appear from the germinating seed. In case of monocots, there is only one cotyledon, whereas two cotyledons or embryonic leaves are present in dicots.

A seed contains all the things that are necessary for the growth and development of a new plant. It is composed of three parts: embryo, endosperm, and the seed coat. In plants, the embryo is a part of a seed that comprises precursor tissues for the leaves, stem, root, as well as cotyledons. The seed coat encases the seed, and protects the embryo and the endosperm.

The endosperm is a tissue that surrounds the seed, and provides nourishment (food, primarily starches). The formation of an embryo starts after fertilization. The zygote divides into two cells, with the top cell being the embryo, and the suspensor (cell at the bottom) anchoring the embryo. The first cell divides, thereby forming a proembryo. As the cell continues to divide, a globular embryo is formed. With cell differentiation, one or more cotyledons form and grow. As the embryo matures, its pressure crushes the suspensor. The mature embryo is composed of a radicle (embryonic root), embryonic shoot (plumule that is composed of epicotyl and hypocotyl), and cotyledons.

Cotyledons are seed leaves produced by the embryo. These are not considered to be true leaves. These are seed leaves that provide the seed and the germinating seedling with a source of food in the initial stages of germination. They continue to do so, until the first true leaves emerge and begin photosynthesis. Monocot plants have only one cotyledon.

In monocots, the number of petals, stamens, or other floral parts are in multiples of three (3, 6, 9).

Six petals of a daffodil

Veins in the Leaves

Another characteristic trait of monocot plants is that there are several major leaf veins that run parallel to the length of the leaf. 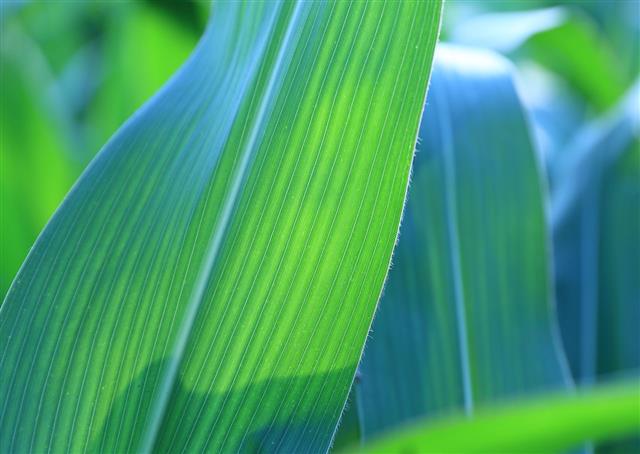 Vascular tissue is composed of plant cells that facilitate the passage of water and organic/inorganic molecules to places where they are stored and used. These tissues are grouped together to form vascular bundles. In case of monocots, these bundles are scattered throughout the stem. However, a majority of these bundles are located towards the outer edge or periphery than the center.

Monocots have an adventitious root system. Unlike the tap root wherein the primary root grows vertically in the soil and secondary roots grow from it, the roots of monocots arise from a stem, or sometimes a leaf. In case of monocots, the primary root usually dies at an early stage. The primary root is replaced by several slender roots that branch laterally from the stem or the hypocotyl (the region of transition between the root and the stem in the embryo). Monocots have fibrous roots.

Besides the aforementioned characteristics, the number of furrows or pores in pollen is just one is case of monocots. When it comes to the growth form, monocots are mostly herbaceous.

There are different types of flowering plants that are grouped under monocotyledonous plants. These range from grasses and climbing vines to large palms. Some of the examples of monocots include:

On a concluding note, the characteristic feature that differentiates monocots from dicots is the presence of only one seed leaf or cotyledon in the embryo. However, there are some issues when it comes to the classification of flowering plants into monocots and dicots. There are botanists who feel that it is not feasible to classify flowering plants into these two classes. This is mainly due to the fact that some plants might have characteristics of both classes. For instance, plants from the Dioscoreales and Smilacaceae family are placed in the category of monocots, but they don’t have the characteristic feature of parallel veins on the leaves. They have broad, reticulate-veined leaves. On the other hand, Potamogeton is a monocot that has floral parts in multiples of four. Also, some monocots show secondary growth.