Carbon is probably the most vital element on planet Earth. Its vitality is reasserted by the carbon cycle. This BiologyWise article presents its diagram and a comprehensive explanation that will give a better understanding of this process.

Carbon is probably the most vital element on planet Earth. Its vitality is reasserted by the carbon cycle. This BiologyWise article presents its diagram and a comprehensive explanation that will give a better understanding of this process.

If oxygen is the mainstay of all lifeforms, carbon is the essence of life. A major portion of the structure of any life form is composed of carbon and its compounds. Carbohydrates, which is the main source of energy for all lifeforms, contains carbon as its main constituent. Carbon atoms are everywhere; in plants, animals, oceans, air, rock, soil, etc., and it doesn’t stay in one place.

Various natural and man-invoked activities ensure that the carbon atoms are always on the move. But this circulation of carbon is not random. It follows a particular pattern, a periodic cycle that is known as the carbon cycle. In the sections given below, we will see a simple diagram and explanation.

What is a Carbon Cycle?

It is a cycle involving biological, geological, and chemical processes in which carbon atoms are exchanged between the Earth’s biosphere, pedosphere, geosphere, hydrosphere, and the atmosphere. Carbon cycle is one of the most important cycles of the Earth and symbolizes the recycling of this abundant element throughout the biosphere as well as in all of its organisms.

It is usually considered that there are five major reservoirs of carbon on the planet, which are interlinked by flow of exchanges. These reservoirs are:

Let us see the diagram below in a symbolic form first that illustrates the flow of carbon in various processes amongst the various layers discussed above.

Here is the exact flow of events, as carbon flows from one layer to another as shown in the diagram above.

Below is another general flow chart of a carbon cycle representing the movement of carbon in various layers. In this one, we can clearly understand the complete steps of the carbon cycle and one can easily figure out that the total amount of carbon remains fixed. There is no creation or destruction of carbon in this process and only involves the movement of this element around a complete cycle in compound form. 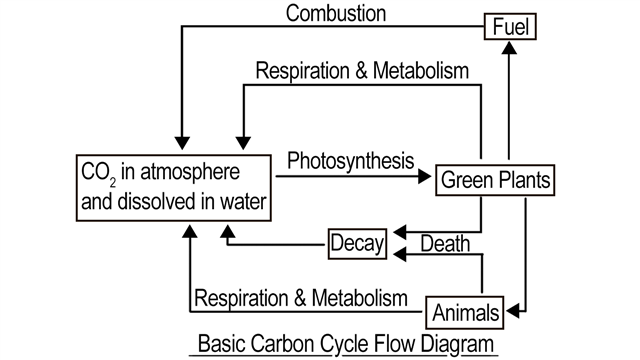 Hope, you have thoroughly understood the diagram and process of carbon cycle. In these times of greenhouse effect concerns, maintaining the balance in the carbon cycle becomes very vital.