The 4 Basic Modes of Speciation Show How Species Evolve

The evolutionary process that leads to the formation of a new species from an existing one is termed as speciation. BiologyWise provides a brief description of the four basic modes of speciation, namely allopatric, parapatric, peripatric, and sympatric speciation. 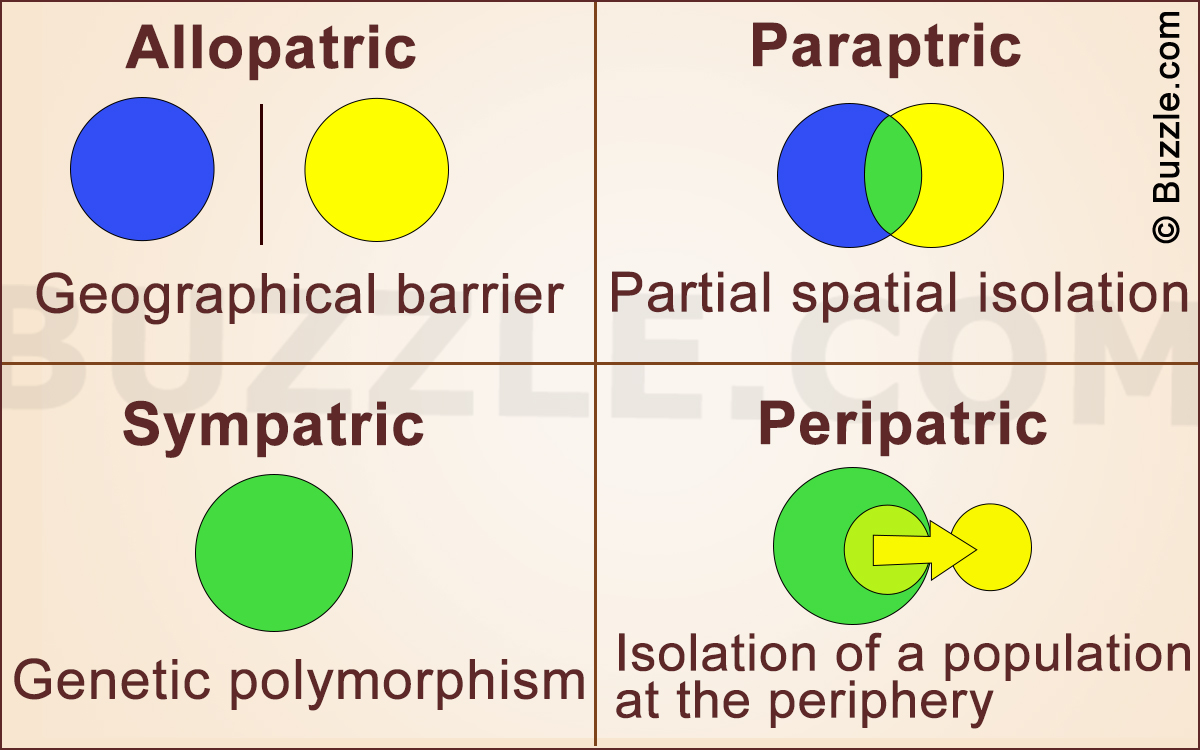 The evolutionary process that leads to the formation of a new species from an existing one is termed as speciation. BiologyWise provides a brief description of the four basic modes of speciation, namely allopatric, parapatric, peripatric, and sympatric speciation.

The term species refers to a group of individuals that can interbreed to produce viable offspring. Speciation refers to the evolutionary process of formation of a new species from the existing ones.

Although several mechanisms have been proposed to explain how speciation occurs, allopatric, parapatric, peripatric, and sympatric speciation have been considered to be the basic modes of speciation.

Given below is a brief description of these four types of speciation along with the classical examples of species that have evolved through these modes. In addition, other suggested modes of speciation have also been outlined.

Regarded as the most common type of speciation, allopatric speciation involves the physical separation of a species into two groups. This may occur due to climatic changes, movement of tectonic plates leading to the fragmentation of a mass of land, or eruption of a land mass, formation of waterways, or due to the presence of an impassable mountain range.

Due to such an impassable barrier, the two separated groups are unable to interact with each other. Moreover, each group accumulates changes (physical as well as behavioral) in order to adapt to the changes in their respective habitat. Owing to such pressure of natural selection, the two groups become distinct from each other to the extent that they cannot or do not breed with each other.

★ Examples
The formation of the Isthmus of Panama, that occurred about 3.5 million years ago, and today separates the Caribbean Sea and the Pacific Ocean, led to the formation of several new aquatic species. The formation of this land mass due to tectonic plate movements blocked the gene flow between populations of marine animals belonging to the same species.

Another example includes the development of the Nene goose or Branta sandvicensis, endemic to the Hawaiian Islands. This goose has evolved from the Canada geese or Branta canadensis, after the formation of the Hawaiian islands, that took shape due to volcanic eruptions. The Nene geese have accumulated adaptations, like less webbed feet, long and strong toenails, and thick foot pads. These adaptations enable them to easily walk on the lava plains.

This mode of speciation occurs due to partial spatial isolation of populations, and is characterized by a small overlap in their ranges as well as significant gene flow amongst the populations. However, the gene flow reduces due to changes in the local conditions, and the two populations become reproductively isolated.

This mode of species formation occurs when populations belonging to the same species inhabit adjacent areas. These adjacent areas may experience changes in the climatic or geographic conditions, resulting in varying selection pressures in the two regions. As a result, one or both populations may diverge from one another. Moreover, members of a population prefer to mate with members of their respective region, even though mating with those in the adjacent region is possible. As a result, divergence takes place to the extent of reproductive isolation.

★ Examples
A population of Buffalo grass or sweet vernal grass (Anthoxanthum odoratum) developed tolerance to heavy metal and became divergent from the adjacent population. A group of these plants grew near mines, and the mining activity led to contamination of the soil with heavy metals, like zinc and lead. This contamination occurred in the soil present within a specific distance from the mine.

The plants present within this distance developed tolerance to these heavy metals, whereas the neighboring plants that were not subjected to such selection pressure remained intolerant. These two populations were continuous, and gene flow was possible amongst them. However, in due course of time, the populations evolved different flowering times, thus, limiting the gene flow and proceeding to speciation.

The ring species of Ensatina salamander (Ensatina eschscholtzii), spread along the Pacific coast, has evolved from a single ancestor due to varying selection pressure across this contiguous region. Ring species refers to the species present in a circular arrangement around a central region. The original Ensatina species spread southward, from Oregon and Washington, along two continuous regions of the Central valley―the coastal arm and the inland arm, and evolved depending on the selection pressures encountered. About 20 different types of species of the Ensatina salamander have been identified, and interbreeding amongst them is found in about 13 zones. However, the species that inhabit the region where the two arms meet, in Southern California, are so divergent that interbreeding is not possible.

Proposed by Ernst Mayr, in this type of speciation, a small group of members inhabiting a peripheral region of the range undergo reproductive isolation to form a new species. Many a time, it is considered to be a variation of allopatric speciation.

Mayr observed that populations inhabiting the peripheral regions of a range often showed certain variance with respect to the other members of its species and spread across the range. This divergence further increased to an extent that even if they entered the niche of the parental population, these peripheral members remained distinct and reproductively isolated. Peripatric speciation also refers to the speciation events that occur when a small group of members colonize a new habitat, or if a peripheral part of the range fragments off and gets isolated. Both these events lead to the development of new characteristics, owing the unique selection pressure of the region, resulting in the formation of a new species. Speciation due to fragmentation of a peripheral part is similar to allopatric speciation, except that the isolated population is very small as compared to the ancestral one.

★ Examples
The evolution of polar bears (Ursus maritimus) from the brown bears (Ursus arctos) is one of the best known examples of this mode of speciation. During the Pleistocene period, glaciation resulted in the isolation of a small population of brown bears.

The members of this small population acquired several physical and physiological characteristics like white fur for camouflaging in snow, ability to swim in extremely cold water and over long distances, tolerance to extremely cold conditions, and many more. However, the polar bears are not reproductively isolated from the brown bears. The two species can breed to produce a hybrid bear termed the grizzly bear. Nevertheless, due to the vast adaptations and their inability to survive in each others’ niches, these two populations are classified as different species.

The London Underground mosquito (Culex pipiens f. molestus) presents an interesting case of peripatric speciation. This form of mosquito has evolved in the last century from C. pipiens, its overground counterpart. It is believed that some C. pipiens members migrated into the London Underground and adapted to the subterranean environment. These newly acquired characteristics include loss of cold tolerance and hibernation, coupled with mating all year round and adaptation to warm conditions, unlike the ancestral species. In addition, the C. pipiens f. molestus developed the ability to bite mice, rats, and humans, whereas the ancestral species bit only birds. This newly evolved group of mosquitoes is now found in almost all underground systems of the world.

While inhabiting a common range, certain members may adapt to a particular aspect or local conditions of the range, leading to the development of new behavioral or genetic traits. Such adaptations include preference for a specific host, food, or shelter, diurnal to nocturnal habits or vice versa, chromosomal changes like mutations and polyploidy (presence of multiple sets of chromosomes). Over a period of time, local selective pressure results in a huge difference to an extent that they cannot interbreed and form a new species.

Note― Several scientists and naturalists believe that such a process does not occur, and the observed or stated examples may be due to one of the above-mentioned three modes. As a result, it still remains as a controversial mode.

★ Examples
Cichlids, a group of freshwater fish inhabiting Lake Victoria, in Africa, represent a diverse range of species that have formed through sympatric speciation. Here, the color of ambient light and clarity of water varies with the varying depths of the lake. The ambient light in shallow water is blue, whereas red light dominates the deeper waters. Genetic variation led to increased sensitivity to red and blue light.

The North American apple maggot fly, or Rhagoletis pomonella, is an insect believed to be diverging from its hawthorn-feeding co-members through sympatric speciation. These flies are known to exhibit host fidelity, i.e., they specifically mate on or near the fruit of its host plant. The ancestral race of these flies fed on hawthorns. Of these, some members began feeding on apples, when apples were introduced in North America. These members chose to mate with other members that fed on apples and did not prefer the counterparts that fed on hawthorns. Subsequently, the two groups of flies developed adaptations specific for feeding on their respective fruit, and were unable to feed on both. This led to the formation of a new population that is reproductively isolated from the hawthorn-feeding maggot flies.

This chromosomal model of speciation proposed by Michael White and his coworkers suggests chromosomal rearrangements and polyploidy as a driving force for speciation. It is debated whether this mode should be considered as a separate mode of speciation, or whether it is a special case of sympatric speciation.

Here, members of a population, inhabiting a particular range and experiencing uniform selection pressure, may undergo spontaneous chromosomal changes, like polyploidy leading to speciation. Polyploidy is a common occurrence in several plants, and has also been observed in certain races of grasshoppers and stick insects.

All the four modes of speciation are based on the premise of local adaptation and reproductive isolation. In some cases, one leads to the other, while in some, both may occur simultaneously. Nevertheless, each mode and the plethora of documented examples present an excellent example of how life makes its way, no matter what.