A Detailed Description of the Anatomy of Spiders

The internal anatomy of spiders is a vital factor in their success as a family. BiologyWise explains more...

Home / Uncategorized / A Detailed Description of the Anatomy of Spiders 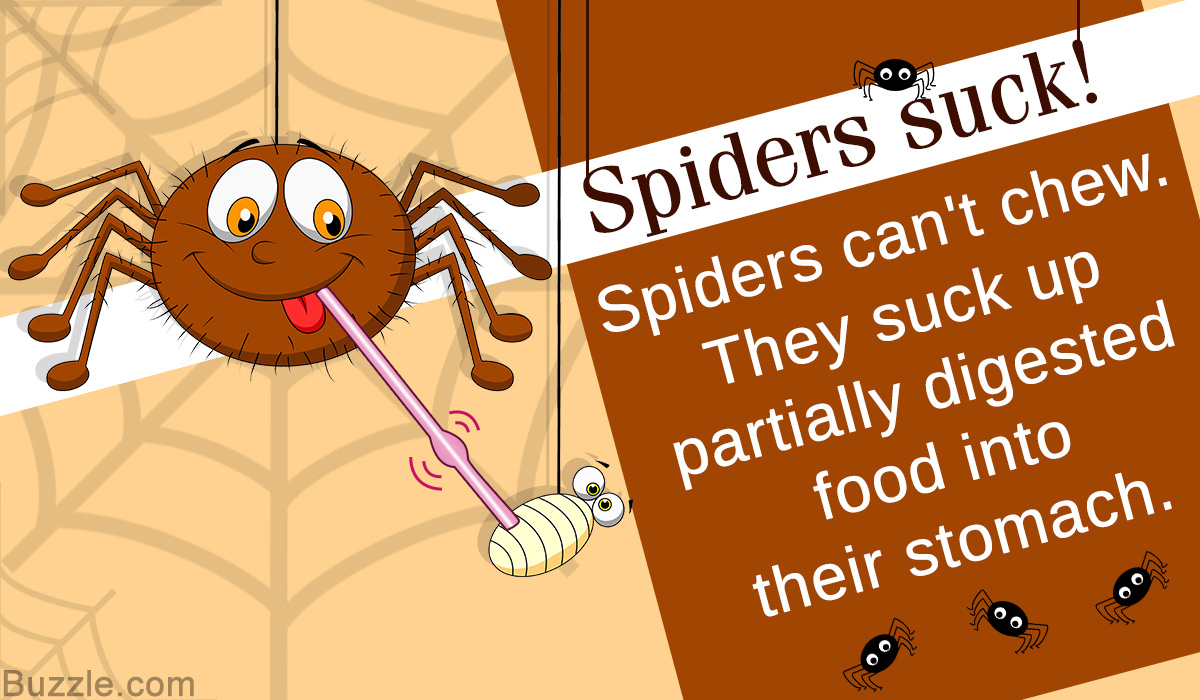 The internal anatomy of spiders is a vital factor in their success as a family. BiologyWise explains more… 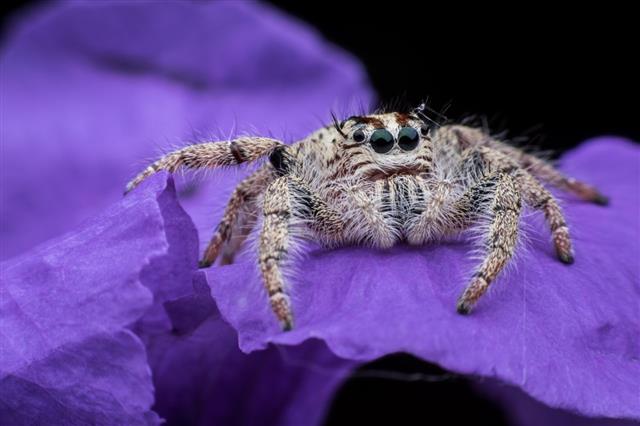 Female spiders often kill and eat the males after copulation.

Spiders scare the hell out of many people, but in reality, they are harmless creatures, and to the curious mind, extremely interesting. Spiders are found all over the world, some even beyond the Arctic and Antarctic circles.

Spiders are a unique class of arachnids, and are distinguished by…
…production of silk
…the ability to produce venom (most species)
…specialized pedipalps used in mating 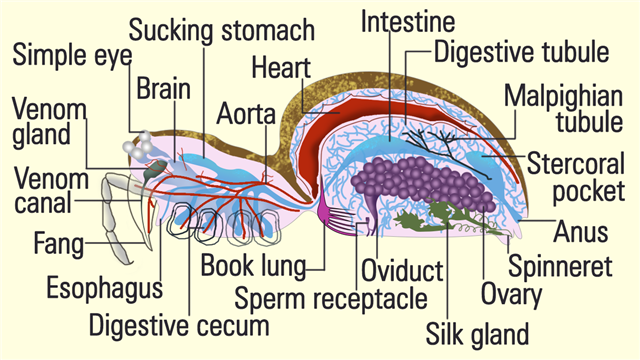 Unlike other insects, the most populous type of arthropods – spiders have bodies divided into two segments or tagmata (singular: tagma). These are the cephalothorax, formed by a fusion of the head and thorax (cephalon means head/brain), and the abdomen. These are also called prosoma (front body) and opisthosoma (rear body), respectively. The two tagmata are connected by a thin waist-like structure called pedicel. The pedicel joint allows the spider to move the abdomen without moving the cephalothorax. This is useful especially when spinning webs, when the abdomen needs to move according to the pattern of the web, but the cephalothorax has to remain stationary.

Spiders’ legs, chelicerae, eyes, mandible, claws, etc., are all attached to the cephalothorax, whereas, the abdomen contains most of their internal organs.

Spider eyes are a combination of the compound eyes seen in insects, and the single-lens eyes seen in higher organisms. Spiders have multiple – usually 8 – single eyes, but the configuration of the eyes differs according to the habitat and diet of the particular species. Some spiders even have 6, 4, or 2 eyes.

Some species, especially those specialized to living in caves, lack eyes entirely, since they are useless in their dark environment.

Vision is rarely the primary sensory tool in spiders (the hair on their legs are their crucial sensory organs), but hunting spiders such as jumping spiders and wolf spiders have extremely well-developed vision, and some even have color vision. These spiders don’t weave silk webs, but actively pursue prey by ambushing or chasing them.

Chelicerae are the mouth parts of spiders, and are also used in most species to inject venom into their victims. Spiders can’t chew their food, and instead suck their food after starting the digestion process outside their body. The fangs are found on the extremity of chelicerae, and are connected to the venom glands, situated behind the chelicerae.

Spiders can’t chew and can only drink semisolid, mashed food. They either use their chelicerae to tenderize their prey, or, in case of spiders with weaker chelicerae, spew digestive juices onto the food, starting the digestion process outside the body. They then proceed to suck up the mashed food. The sucking stomach, which is a muscular pump with valves to ensure one-way movement of the food, lies in the cephalothorax, and leads to the mid-gut, or the intestine. The intestine extends into the abdomen, and gives rise to diverticula. The intestine culminates in the stercoral pocket, which is analogous to the rectum, and the anus.

Unlike higher organisms, spiders don’t have a network of blood vessels, but possess an open circulatory system. Instead of interconnected mazes of arteries, capillaries, and veins, a spider’s heart pumps blood into the arteries, which deliver the blood in sinuses surrounding internal organs. The blood in arthropods is known as hemolymph, and spider blood is called hemocyanin. It contains copper, and is thus tinted slightly blue.

The heart is situated in the upper abdomen, and is covered by a thin covering known as pericardium. The aorta extends into the prosoma through the pedicel, while several smaller arteries feed the abdomen.

Different species of spiders have variations in the particular method of respiration, but like all arthropods, spiders don’t have a ‘nose’, and breathe trough diffusion of oxygen into the blood in their breathing organ. Many spiders have book lungs, an organ with alternating layers of sinus and tissues, that allow for the diffusion of oxygen into the hemolymph. Some spiders have developed tracheal systems similar to those seen in many insects. Tracheal systems are more efficient than book lungs, and allows the spider to be more active. Hunting spiders such as jumping spiders and wolf spiders usually have tracheal systems that allow them to actively pursue their prey. Some spiders that live in moist, hydrated habitats, don’t have a specialized respiratory organ, since the diffusion of oxygen through their skin alone is sufficient for their survival. The respiratory organs are situated in the lower abdomen, usually near the pedicel.

Most spiders reproduce sexually, and have well-developed sexual organs. Male spiders produce semen, and hold it in their pedipalps until they find a female. The semen is inserted into the female through her epigyne. Cannibalism among spiders after copulation is a well-documented phenomenon. Female spiders are larger than males, and can mistake potential mates for a potential meal.

Spinnerets are responsible for the production of spider silk, and are located in the abdomen, below the gonads. The spinnerets produce silk, which is then woven using specialized hair on the fourth pair of legs. Most spiders build webs, but many have evolved to become active hunters. The spinnerets on these spiders are either reduced or poorly developed.

Spider anatomy is a weird mixture of primitive and advanced characteristics. If you are not scared of them, spiders are one of the most interesting and bewildering creatures in the world.