A Brief Summary of Louis Pasteur’s Germ Theory of Disease

Louis Pasteur was a French chemist-turned-microbiologist, who proved the existence of microbes in air. His pioneering studies laid the foundation for the modern-day understanding of diseases, their etiology as well as vaccine development. 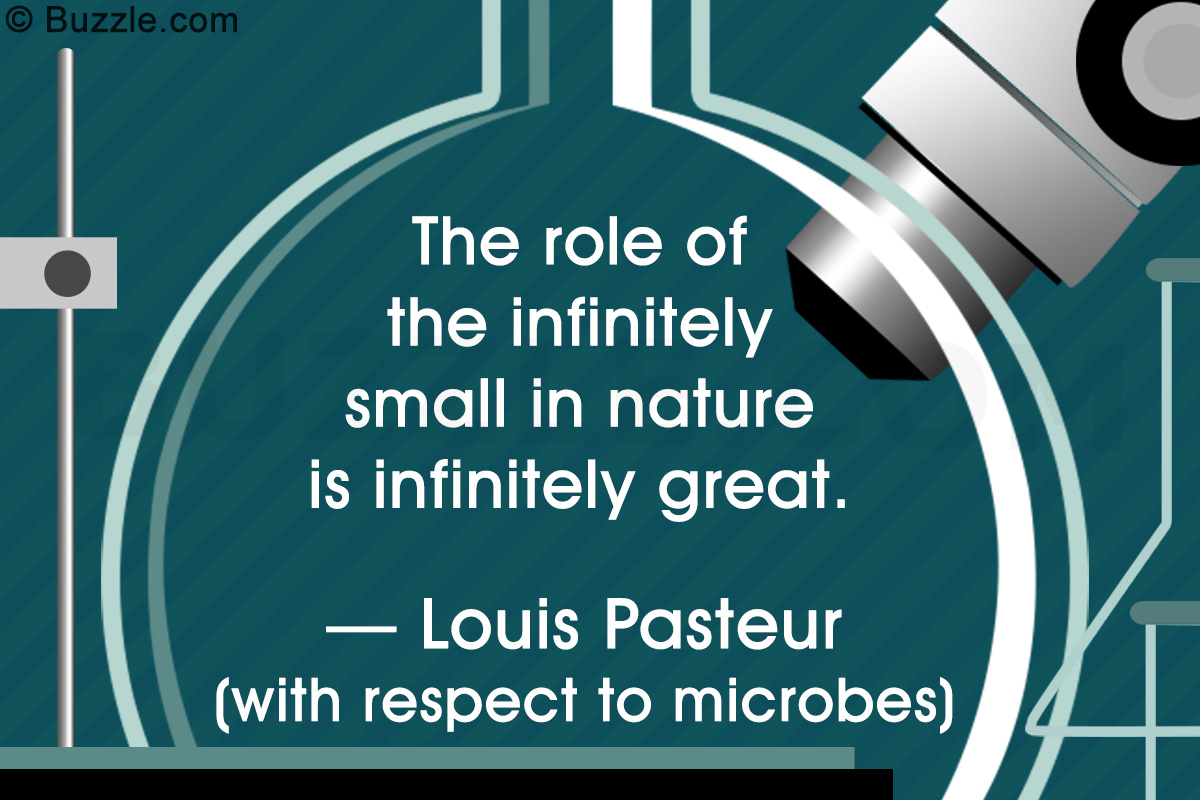 Louis Pasteur was a French chemist-turned-microbiologist, who proved the existence of microbes in air. His pioneering studies laid the foundation for the modern-day understanding of diseases, their etiology as well as vaccine development.

In the fear of contracting germs, Louis Pasteur never shook hands with anybody, not even the kings and queens.

We all know that when we are down with flu, it is a set of microbes that have invaded our bodies, thereby giving rise to the symptoms. In addition to this, we are also aware that boiling water and heating food items kills the germs, and makes them safe for consumption. It isn’t rocket science, is it?

But way back in the 1800s, it was not this simple. We owe our current understanding of germs or microbes to a French chemist and microbiologist called Louis Pasteur. Apart from his germ theories of fermentation and disease, we also know him as the genius who gave us the process of pasteurization.

Given below is a brief account of the germ theory of disease, as well as the significant experiments and observations of Louis Pasteur, his germ theory of fermentation and its extension to diseases.

What is ‘Germ Theory of Disease’

The germ theory of disease states that certain diseases are caused by specific germs or infectious agents.

In the 1800s, this idea was not widely accepted, and it took a series of experiments and hard work for Pasteur to prove that air contains infinitely small living organisms, and that these organisms are responsible for diseases.

Such tiny living things, which we know today as microorganisms, were first observed by Antonie van Leeuwenhoek, way back in the 1670s. Moreover, the presence of microscopic, disease-carrying agents was proposed by several individuals, hundreds of years before the time of Pasteur. Observations and speculation hinting towards the presence of germs and their involvement in disease also came from the works of Fracastorius, Edward Jenner, Ignaz Semmelweis, Agostino Bassi, John Snow, and several more. But the presence of tiny invisible organisms in air was ridiculed and considered to be a fanciful story.

It was only in the 1860s that this proposition was strongly backed by evidence that came from the experiments by Louis Pasteur, followed by pioneering studies by Robert Koch and Joseph Lister. This greatly revolutionized the approach towards the study of infectious diseases as well as the treatment methods.

What paved the way for the Germ Theory of Disease?

The 1800s witnessed several studies about the generation of life, of which the spontaneous generation theory was much discussed. According to this theory, life originated spontaneously from inanimate objects. Much famous was the recipe for mice, which stated that a fully grown mice can be created from an old cloth and rotting wheat in mere 21 days. Disproving this theory was the first step towards the formulation of germ theory.

The 1800s witnessed several studies about the generation of life, of which the spontaneous generation theory was much discussed. According to this theory, life originated spontaneously from inanimate objects. Much famous was the recipe for mice, which stated that a fully grown mice can be created from an old cloth and rotting wheat in mere 21 days. Disproving this theory was the first step towards the formulation of germ theory.

At this time (1860s), it was a less known fact that fermentation of beer was brought about by yeasts. In case of Louis Pasteur’s vats, instead of yielding alcohol, the beetroot fermentation broth was turning sour. In order to understand what must be wrong, he took samples from these ‘sick’ vats and began analyzing them.

His observation of live organisms in the broth led him to investigate the spontaneous generation theory, which stated that life arises spontaneously from nonliving matter. He performed a series of experiments that involved boiling water, broths and liquid media in flasks, exposing them to air to show the presence of microorganisms in air.

One of his simplest but most significant and ingenious experiments that proved this premise has been illustrated below. 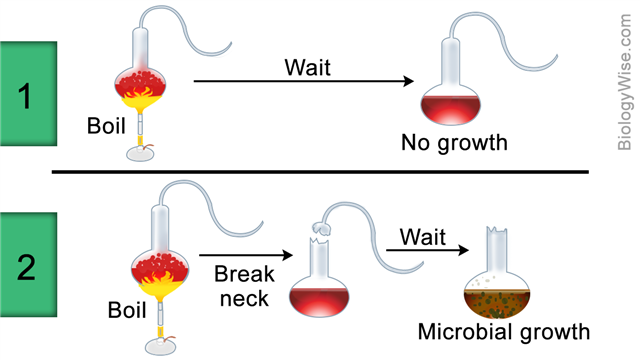 Louis Pasteur took two swan-neck flasks containing a rich liquid broth, and boiled the broths. He retained one flask as it is; and broke the neck of the other flask. The broth in the first flask remained as it is; whereas the broth in the second flask became cloudy which indicated microbial growth.

Dust particles in air entered the first flask but were stuck in the swan neck and could not travel into the broth. On the other hand, dust particles easily fell in the second flask, thereby introducing microbes into the broth. This experiment proved the existence of germs in air (dust particles in air, to be precise), and served as the final nail in the coffin of spontaneous generation theory. This experiment silenced all the debates between germ theory and spontaneous generation theory of origin of life.

Formulation of Germ Theory of Fermentation

The above experiments led him to conclude that it was the microbes in the air that spoiled the fermentation broths. He further investigated fermentation processes for several other compounds like lactic acid, butyric acid, etc. In this pursuit, he formulated the germ theory of fermentation which states that each fermentation process is associated with a specific microbe.

Pasteur extended the germ theory of fermentation to human and animal diseases, and speculated that diseases are also the result of germs growing in the body. With this in mind, he investigated several diseases including pébrine and flacherie in silkworms, chicken cholera, anthrax in sheep, and rabies in humans. He further developed Edward Jenner’s idea of vaccination, and was the first to develop and use an artificially weakened microbe as vaccine in the form of rabies vaccine. He also inspired other scientists to investigate diseases using this approach, and the rest is history.

The papers submitted by Louis Pasteur and Robert Koch regarding their observations and therapeutic suggestion with respect to anthrax, constitute the first formal representations of the germ theory of diseases. But Pasteur’s most significant contribution came from his experiments on germs, which permanently ended the debate with spontaneous generation. While demonstrating that boiled water can remain sterile until it is exposed to air, he said:

“Life is germ and a germ is life. Never will the doctrine of spontaneous generation recover from the mortal blow of this simple experiment.”