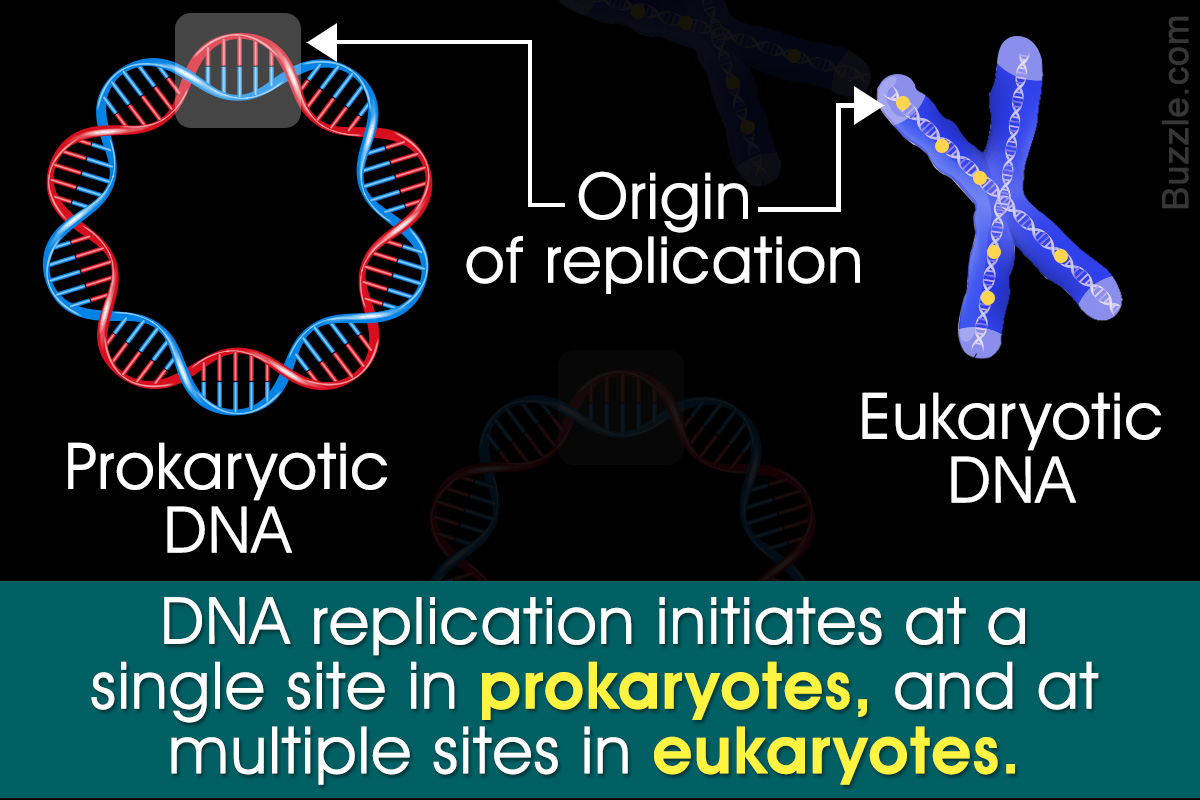 DNA (deoxyribonucleotide), a.k.a. the secret code of life, is a molecule that possesses all the information that is required at every stage in the life cycle of an organism. DNA replication is the way to ensure that this information is passed down to every newly formed cell, be it a prokaryotic or eukaryotic cell.

Although the basic process of DNA replication remains the same, certain differences have evolved due to the higher genomic complexity of eukaryotes. The same have been outlined below.

DNA Replication in Prokaryotes Vs. Eukaryotes

Prokaryotes do not have nucleus and other membrane-bound organelles, like mitochondria, endoplasmic reticulum, and golgi bodies. The prokaryotic DNA is present as a DNA-protein complex called nucleoid. The replication occurs in the cytoplasm of the cell.

In case of eukaryotes, the organisms that contain a membrane-bound nucleus, the DNA is sequestered inside the nucleus. Hence, the nucleus is the site for DNA replication in eukaryotes.

In prokaryotes, DNA replication is the first step of cell division, which is primarily through binary fission or budding.

In eukaryotes, cell division is a comparatively complex process, and DNA replication occurs during the synthesis (S) phase of the cell cycle.

DNA replication is initiated at a specific or unique sequence called the origin of replication, and ends at unique termination sites. The region of DNA between these two sites is termed as a replication unit or replicon.

Eukaryotic DNA is comparatively very large, and is organized into linear chromosomes. Due to the high amount of material to be copied, it contains multiple origins of replication on each chromosome. DNA replication can independently initiate at each origin and terminate at the corresponding termination sites. Thus, each chromosome has several replicons, which enable faster DNA replication. The human genome that comprises about 3.2 billion base pairs gets replicated within an hour. If DNA replication was dependent on a single replicon, it would take a month’s time to finish replicating one chromosome.

Once initiated, DNA replication assembly proceeds along the DNA molecule, and the precise point at which replication is occurring is termed as the replication fork. Generally, in both prokaryotes and eukaryotes, the process of DNA replication proceeds in two opposite directions, from the origin of replication.

However, in certain plasmids present in bacterial cells, unidirectional DNA replication has been observed. These plasmids replicate through the rolling circle model, wherein multiple linear copies of the circular DNA are synthesized and then circularized.

Although a similar set of enzymes are involved in prokaryotic and eukaryotic DNA replication, the latter one is more complex and varied. The initiator proteins, single-stranded DNA-binding protein (SSB), primase, DNA helicase, and DNA ligase are present in both prokaryotes and eukaryotes.

During DNA replication, the synthesis of one strand occurs in a continuous manner, whereas that of the other strand occurs in a discontinuous manner through the formation of fragments. The former strand is termed as the leading strand, the latter as the lagging strand, and the intermediate fragments are termed as the Okazaki fragments. The reason for such a difference is the antiparallel nature of DNA strands, as against the unidirectional activity of the DNA polymerase.

Prokaryotic Okazaki fragments are longer, with the typical length observed in Escherichia coli (E. coli) being about 1000 to 2000 nucleotides.

The length of eukaryotic Okazaki fragments ranges between 100 and 200 nucleotides. Although comparatively shorter, they are produced at a rate slower than that observed in prokaryotes.

The termination of DNA replication occurs at specific termination sites in both prokaryotes and eukaryotes.

In prokaryotes, a single termination site is present midway between the circular chromosome. The two replication forks meet at this site, thus, halting the replication process.

In eukaryotes, the linear DNA molecules have several termination sites along the chromosome, corresponding to each origin of replication. However, the eukaryotic DNA replication is characterized by a unique end-replication problem, wherein a part of DNA present at the ends of the chromosome does not get replicated. So, the lagging strand is shorter than the leading strand. This problem is addressed in eukaryotes by the presence of non-coding, repetitive DNA sequence called telomeres, at the ends of chromosomes.