All About the Functions, Types, and Uses of Plasmids

Plasmids are naturally occurring genetic elements found in microbial organisms. They can be found in all three domains of microbes - archaea, bacteria, and eukarya/eukaryota. This BiologyWise post elaborates on the concept of a plasmid along with its functions, types, and applications.

Home / Uncategorized / All About the Functions, Types, and Uses of Plasmids 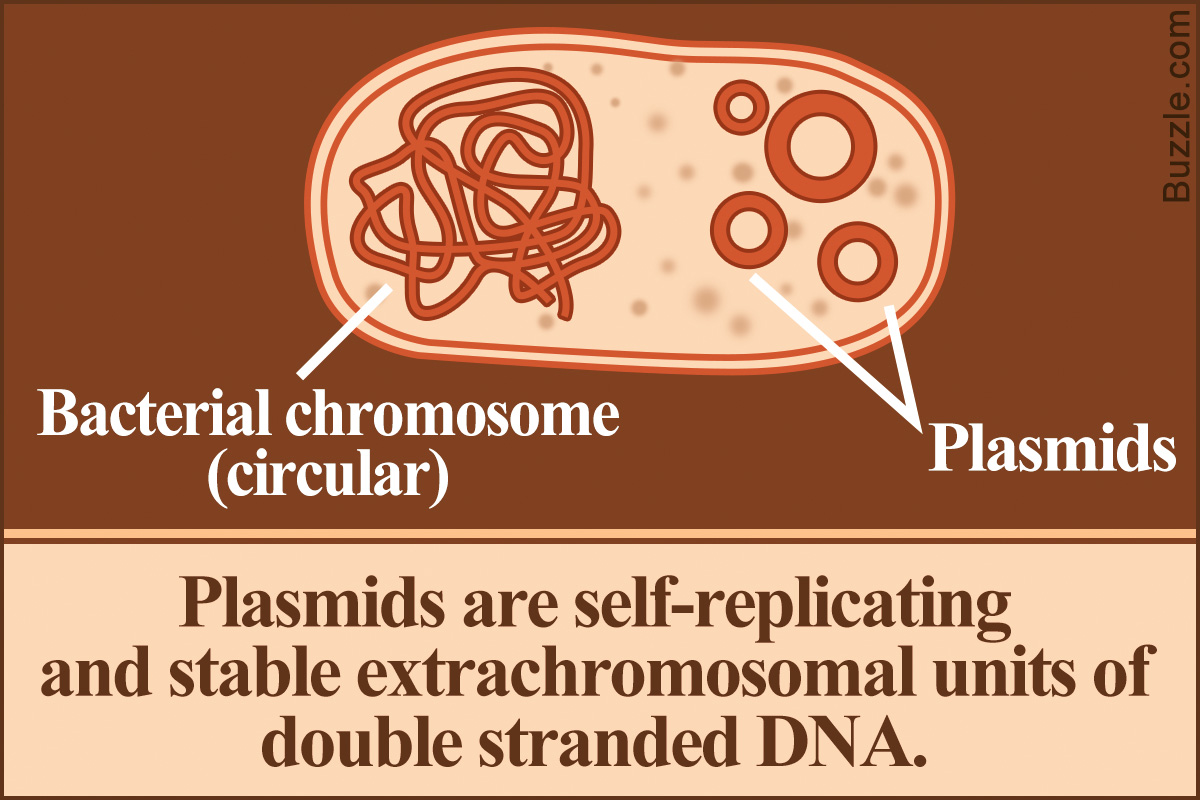 Plasmids are naturally occurring genetic elements found in microbial organisms. They can be found in all three domains of microbes – archaea, bacteria, and eukarya/eukaryota. This BiologyWise post elaborates on the concept of a plasmid along with its functions, types, and applications.

In 1952, Joshua Lederberg coined and introduced the term “plasmid” during the course of his research on bacterial genetics.

Extrachromosomal double-stranded DNA found in the cytoplasm of microbes is called a plasmid. It is a stable genetic entity that can replicate itself autonomously, independent of the chromosomal DNA of the host organism. Its characteristic features include its small size and the possession of genes that lend beneficial qualities to the organism. These genes are, however, non-essential for the survival of the organism. The number of genes contained and the size of a plasmid varies from organism to organism. Also, a variation in the copy number is observed. Copy number refers to the number of copies of the plasmid present in a single host cell. When the cell divides, the number of plasmids is equally distributed among the daughter cells.

A single microbial cell can also be host to different forms of plasmids. The ability of one form of plasmid to co-exist with a different form is called compatibility, and they can be differentiated into two types based on this quality, namely, compatible and incompatible plasmids with respect to specific grouping of plasmids. Compatibility is seen in cases where the plasmids differ in their replicatory systems, while incompatibility is seen in cases where the plasmids have similar functional and replication processes. This is because the similarity in replication mechanisms causes the formation of a competitive environment in which one plasmid dominates and eliminates the other. They are also categorized according to the distinct functions they exhibit. A plasmid can be categorized as a part of two or more groups.

They possess genes that enable the host to be resistant to antibiotics or poisons.

It imparts the host cell with the ability to metabolize normally difficult or unusual organic compounds such as toluene and salicylic acid.

They are involved in bacterial conjugation, and possess the (tra-) genes that initiate the formation of the F-pilus in order to enable conjugation. Genetic material is transferred via this pilus between the conjugated cells. It is self-transmissible, and the F-pilus is also called the sex pilus.

These plasmids produce a toxin called bacteriocin that is lethal to bacteria, but the possession of this plasmid renders the host resistant to the toxin.

They are capable of transforming host cells into pathogens. They occur in Agrobacterium tumefaciens, a pathogen that causes crown gall disease in plants. On infection, the plasmid is transferred to the normal cells of the plant where it proliferates and further exacerbates the disease by switching to the tumor state. In such a state, the cells synthesize opines, toxins, and other virulence factors.

In the context of genetic engineering, a plasmid that is modified to carry non-self genes is called a vector. It is used to express or silence particular genes in a host organism. It can also be used to induce the production of multiple copies of a gene. The gene of interest is inserted into the vector plasmid by means of a restriction/ligation event carried out by the use of suitable restriction enzymes.

The vector not only possesses the ability to carry a gene but also various other features. These features include antibiotic resistance (Kanamycin or Ampicillin), an origin of replication site, which is identified by host replication machinery and used to replicate the plasmid, and a multiple cloning site (MCS). It is also called a polylinker site, and is a stretch of DNA that consists of multiple target sequences for specific restriction enzymes. This site can be used to easily insert the gene of interest for experimental purposes. The vectors also possess promoter sequences near the MCS for efficient expression of gene product. In addition, in some vectors, the MCS is placed within the coding region of a reporter gene such that if the gene of interest is ligated properly, the gene containing the MCS is disrupted, and hence, not expressed. Consequently, the expression of the reporter gene would indicate non-ligation of the gene of interest. The reporter gene is selected as such that the expression can be determined visually (chromogenic).

The ligated vector is introduced in the host cell by a process called transformation, and these host cells are cultured in a medium containing antibiotics. The transformed cells, due to the possession of the plasmids resistance genes, will not be affected but will survive and proliferate, while the non-transformed cells will be susceptible to the antibiotic, and hence, will perish. Since the resistance gene helps in selecting the transformed cells, it is called a selection marker. The selected cells are then harvested and used for experiments. The capacity of a vector in terms of size of insert is 30 to 40 kbp (kilo base pair). When a larger gene is to be inserted, viral vectors or artificial vectors are utilized.

Cloning Vectors
It is a type of vector that is used for the purpose of introducing a gene into the host cell. Once this gene is successfully cloned and expressed in the host cells via transformation, it can be manipulated as per the need during the course of the experiment. It lacks any specialized genes apart from the MCS, reporter gene, and selection marker.

Experimental Plasmids
Modified plasmids that are be used to prevent viral infections, target certain genes, and regulate certain cellular growth patterns, are called experimental plasmids. Their unique structure allows them to transport numerous genes into the host cells. The different types of experimental plasmids are as follows.

➺ RNAi (RNA Interference) – These vectors express and utilize the concept of miRNA and siRNA to regulate the expression of genes. These RNA molecules bind to mRNA molecules of the target gene and either increase or decrease its expression. This mechanism is used to impart resistance to viral infection by preventing the proliferation of the viral particle within the cell.

➺ Lentiviral, retroviral, and adenoviral vectors – These vectors are the most efficient form of vectors for the purpose of gene delivery. These viruses transport the gene within non-diving cells, and due to the lysogenic nature of these viruses, the gene insert can be incorporated into the host genome as well.

➺ Mouse Targeting – This technique involves the use of vector plasmids to transform cell, and then, replace the malfunctioning allele of a gene in the host with the functioning allele of the same gene possessed by the plasmid. This technique is based on the concept of homologous recombination, and can be used to correct or silence gene expression, and also to incorporate mutations for experimental purposes.

➺ Luciferase – These vectors possess the luciferase gene, which, when expressed produces a fluorescent oxidative enzyme. This gene acts as a reporter gene within expression vectors.

➺ Cre/Lox – It employs a site-specific recombinase technology, in which the Cre recombinase enzyme recombines the short Lox sequences in order to bring about DNA inversions, deletions, insertions, and translocations within the host cell.

■ To create transgenic organisms by introducing beneficial genes into host cells. For example, the Ti plasmid is used in plant pathology to develop resistance in plants against diseases such as holcus spot on leaves and crown gall tumors. The plasmid is rendered avirulent by curing it, prior to its use as a vector.

■ The artificial and cost-effective bulk production of antibiotics can be achieved by incorporating an expression vector for that antibiotic in microbial cells. Similarly, other biomolecules can also be produced.

■ They can be used to administer gene therapy, which is a technique used to correct defective genes responsible for disease development.

■ They are also used to study the role of various gene and gene products in a biological system. This is achieved by silencing or overexpressing a particular gene and observing the effects, if any (gene knockout).

Recently, the growing field of bioinformatics has made major contributions towards increasing the pace at which scientific research takes place. Various programs have been developed to simulate the structure and function of a plasmid in order to help predict restriction sites, plan gene manipulation, organize research methodology, and also to predict transformation success rate. This helps in conducting experiments in silico before carrying out wet lab experiments, thus, saving time, effort, and monetary and biological resources. Examples of such software include Lasergene, MacVector, GeneConstructionKit, ApE, Clone Manager, VectorFriends, and Vector NTI.