The lytic cycle is a replication process carried out by a virus within a bacterial cell. The following article is a discussion of the steps to help you understand this process.

The lytic cycle is a replication process carried out by a virus within a bacterial cell. The following article is a discussion of the steps to help you understand this process.

Viral reproduction takes place in two cycles, viz., the lysogenic and lytic cycle. The latter is thought to be the main method of viral replication, as it results in destruction of an infected bacterial cell. This cycle leads to cell lysis, i.e., breaking down of the cell, hence the name. In this article, we shall learn its steps in short.

What is Lytic Cycle?

The definition states that virulent phages are those that can multiply only on bacterial cells. At the end of their life cycle, they cause cell lysis, which kills the host bacterium. The viruses that infect bacteria are called bacteriophages. The most common examples of a bacteriophage are T4 and lambda phage. Both these phages can infect the bacterium Escherichia coli (E. Coli). Phages are obligatory intracellular parasites like other viruses and need a host cell to reproduce. The T4 phage replicates by the lytic cycle, which eventually causes the host cell’s death. The lambda phage multiplies using lysogenic cycle, which does not cause the host cell to die. There are five stages of lytic cycle, and they are explained in the following paragraphs using T4 phage as an example.

The bacteriophage reproduces using lytic cycle as its method of reproduction. The five steps of its reproduction are attachment, penetration, biosynthesis, assembly, and release. Let us learn about these steps in detail. 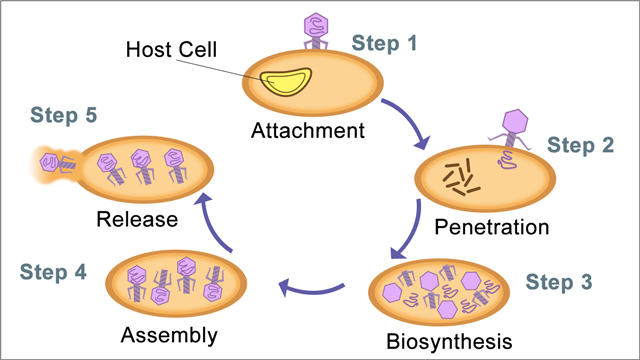