In an organism, zygosity is the level of similarity between the genetic alleles for a given trait. While few traits show the presence of just one allele (low variation), many others exhibit the presence of two or more alleles. Based on the similarity of these alleles, the genetic trait is said to homozygous or heterozygous. BiologyWise explains the concept and the differences between them. 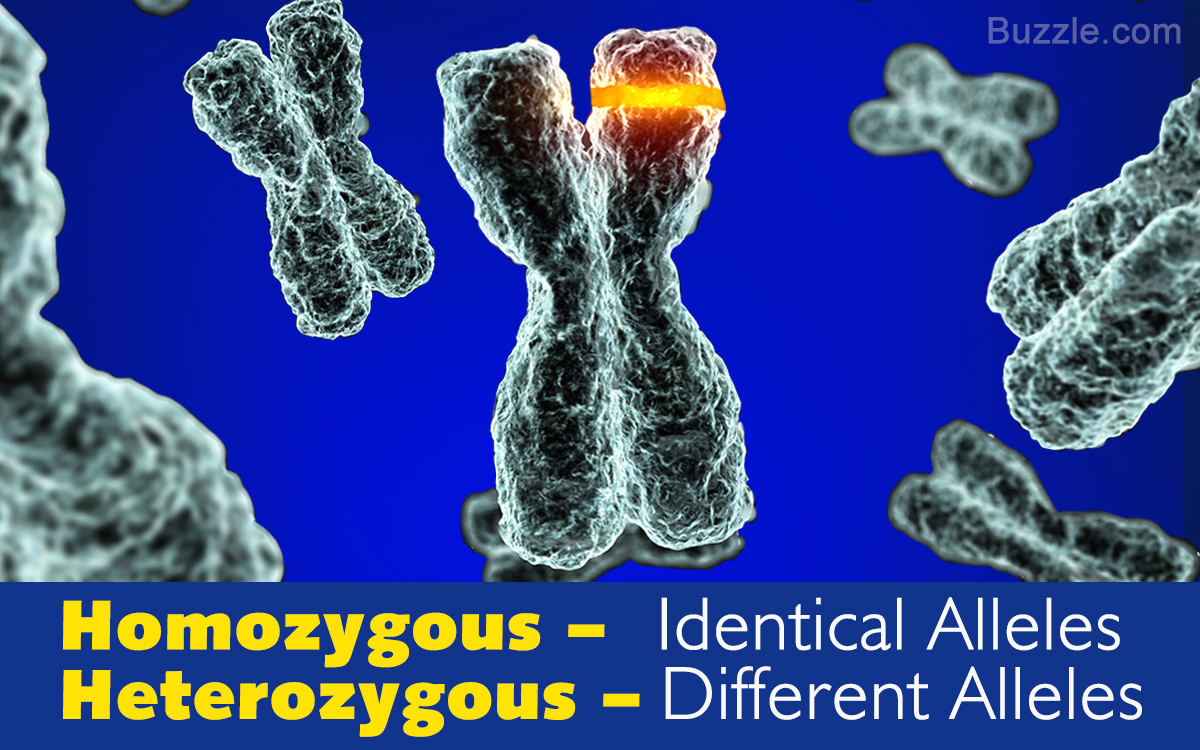 In an organism, zygosity is the level of similarity between the genetic alleles for a given trait. While few traits show the presence of just one allele (low variation), many others exhibit the presence of two or more alleles. Based on the similarity of these alleles, the genetic trait is said to homozygous or heterozygous. BiologyWise explains the concept and the differences between them.

The concept of zygosity is based on Gregor Mendel’s laws of genetic inheritance.

A change in the allele results in a different phenotypic expression of the gene product. The similarity or dissimilarity of these alleles determines the zygosity of that particular gene, i.e., whether the gene is heterozygous or homozygous.

When both loci of a gene, on homologous chromosomes, possess identical alleles, the organism is said to be homozygous for that particular gene, and can also be referred to as a homozygote for the gene in question. Purebred organisms are always homozygotic for the desired traits. Also in genetic experiments, organisms with an unknown zygosity are crossed with organisms of the same species that are homozygous for that trait. Such a deterministic crossing is called test cross.

According to the inheritance pattern of genes, homozygosity also displays a dominant and a recessive allele. In a homozygous-dominant case, the organism possesses two copies (both alleles) of the dominant allele. If the dominant allele for a gene is represented by “Q”, and the recessive allele is represented by “q”, a homozygous-dominant organism for the gene will have a genotype of “QQ”. For example, in case of eye color in humans, the allele for brown color (B) is dominant over the allele for blue color (b). Hence, an individual, who is homozygous dominant for eye color, will have brown eyes with the genotype “BB”.

Similarly, in a homozygous-recessive case, the organism possesses two copies of the recessive allele, and their genotype would be “qq” for a particular gene. For example, in case of the recessive blood disorder of hemophilia (h), the condition occurs only when the individual is homozygous recessive; hence, the affected individual will have the genotype “hh”.

When both loci of a gene, on homologous chromosomes, possess distinct and different alleles, the organism is said to be heterozygous for that particular gene, and can also be referred to as a heterozygote. Since both alleles are different, the organism will be in possession of both the recessive and the dominant allele; thus, the genotype will be “Qq”. As the individual has both forms of the allele, the phenotype produced is not based on plain dominance, but is a bit more complex.

In case of a given trait that follows simple dominance, the phenotype displayed is the dominant phenotype despite the heterozygous nature of the alleles (the recessive allele is overridden by the dominant allele). This state of zygosity displays more complex forms of dominance as well, including co-dominance and incomplete dominance.

In case of co-dominance, the phenotypic traits of both alleles can be observed in the individual, e.g., human blood groups, and in case of incomplete dominance, the heterozygous state displays a phenotype that is an intermediate between that exhibited by the homozygous-dominant and homozygous-recessive phenotype, e.g., the 4 o’clock plant produces a pink flower in heterozygous conditions which is an intermediate between the red flower of the homozygous-dominant state and the white flower of the homozygous-recessive state.

These concepts of zygosity are best explained via the example of human blood types. The gene that determines human blood type shows a presence of three alleles namely – A, B, and O, where A and B alleles are dominant and O allele is recessive. Hence, the homozygous genotypes would be AA, OO, BB. Of these, AA and BB are homozygous dominant, and display the blood types A and B respectively; whereas, OO is homozygous recessive exhibiting the blood type O. The possible heterozygous genotypes are AO, BO, and AB. In this case, AO and BO follow simple dominance, and hence, display the blood types A and B respectively. In case of AB, the genotype is heterozygous, and as both alleles are dominant, a co-dominant inheritance pattern is observed resulting in the blood type AB.

The terms heterozygous and homozygous are applied only in the case of genetic inheritance of the alleles of a gene, and hence, cannot be used as a broad term to describe the entire genome of the individual organism. This would be extremely inaccurate as each gene possesses a different number of alleles, and these alleles follow different inheritance patterns.